Once the United States’ largest private residence and the most expensive to build, today you could almost miss it. The Winchester Mystery House in San Jose, California, sits between the eight lanes of the I-280 freeway, a mobile home park, and the remains of a space age Century 23 movie theater. The world has changed around it, but the mansion remains stubbornly and defiantly what it always was.

Each time I visit the Mystery House I try to envision what this space must have looked like to the “rifle widow” Sarah Winchester, when she first encountered it in 1886—acre after acre of undulating orchards and fields, broken only by an unassuming eight-room cottage.

Legend holds that before the 1906 earthquake—when her estate was as huge and fantastically bizarre as it would ever be with 200 rooms, 10,000 windows, 47 fireplaces, and 2,000 doors, trap doors, and spy holes—not even Sarah could have confidently located those original eight rooms.

Sarah had inherited a vast fortune off of guns. Her father-in-law Oliver Winchester, manufacturer of the famous repeater rifle, died in 1880, and her husband Will, also in the family gun business, died a year later. After she moved from New Haven, Connecticut, to San Jose, Sarah dedicated a large part of her fortune to ceaseless, enigmatic building. She built her house with shifts of 16 carpenters who were paid three times the going rate and worked 24 hours a day, every day, from 1886 until Sarah’s death in 1922.

An American Penelope, working in wood rather than yarn, Sarah wove and unwove eternally. She built, demolished, and rebuilt. Sarah hastily sketched designs on napkins or brown paper for carpenters to build additions, towers, cupolas, or rooms that made no sense and had no purpose, sometimes only to be plastered over the next day. In 1975, workers discovered a new room. It had two chairs, an early 1900s speaker that fit into an old phonograph, and a door latched by a 1910 lock. Sarah had apparently forgotten about it and built over it.

In 1911, the San Jose Mercury News called Sarah’s colossus a “great question mark in a sea of apricot and olive orchards.” Over a century later, the San Francisco Chronicle was still baffled: “the Mansion is an ornately complex answer to a very simple question: Why?” 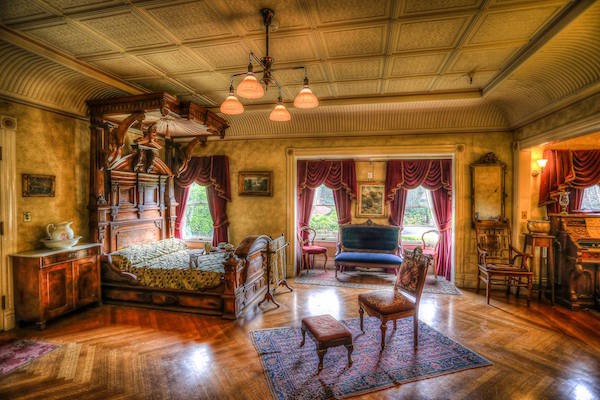 The answer: Sarah’s building is a ghost story of the American gun. Or so the legend went. A spiritualist in the mid-1800s, when plenty of sane Americans believed they could communicate with the dead, Sarah became terrified that her misfortunes, especially the death of her husband and one-month-old daughter, were cosmic retribution from all the spirits killed by Winchester rifles. A relative said many decades later Sarah fell “under the thrall” of a medium, who told her that she would be haunted by the ghosts of Winchester rifle victims unless she built, non-stop—perhaps at ghosts’ direction, for their pleasure, or perhaps as a way to elude them. Haunted by conscience over her gun blood fortune and seeking either protection or absolution, Sarah lived in almost complete solitude, in a mansion designed to be haunted.

When I heard Sarah’s ghost story from a friend in graduate school, I was enthralled. Eventually, Sarah became the muse for my book on the history of the American gun industry, and culture.

I keenly anticipated my first visit to the Mystery House. I must have been hoping that the house would yield up its secret to me. At first glance I was deflated, for the unusual reason that from the outside, the house wasn’t entirely weird.

But the drama of this house, like the drama of Sarah’s life, was unfolding on the inside. A staircase, one of 40, goes nowhere and ends at a ceiling. Cabinets and doors open onto walls, rooms are boxes within boxes, small rooms are built within big rooms, balconies and windows are inside rather than out, chimneys stop floors short of the ceiling, floors have skylights. A linen closet as big as an apartment sits next to a cupboard less than an inch deep. Doors open onto walls. One room has a normal-sized door next to a small, child-sized one. Another has a secret door identical to one on a corner closet—it could be opened from within the room, but not from without, and the closet drawer didn’t open at all.

Details are designed to confuse. In one room, Sarah laid the parquetry in an unusual pattern: When the light hit the floor a particular way, the dark boards appeared light, and the light boards, dark. Bull’s-eye windows give an upside-down view of the world. Even these basic truths, of up and down, and light and dark, could be subverted.

The house teems with allusions, symbols, and mysterious encryptions. Its ballroom features two meticulously crafted Tiffany art-glass windows. Here, Sarah inscribed her most elegant clues for us. The windows have stained glass panels with lines from Shakespeare. One reads, “These same thoughts people this little world.” It’s from the prison soliloquy in Shakespeare’s Richard II. Deposed from power and alone in his cell, Richard has an idea to create a world within his prison cell, populated only by his imaginings and ideas. 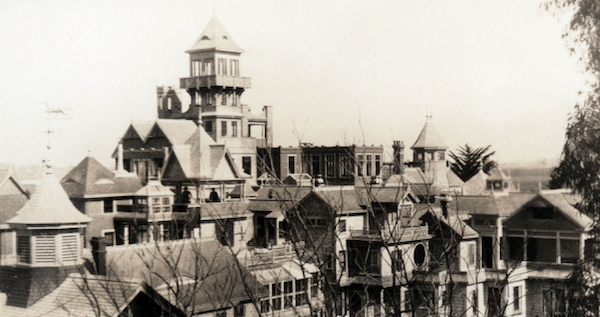 Is the legend accurate? I found spine-tingling clues on the archival trail that incline me to believe that Sarah really was a spiritualist, but I never found that smoking gun, to borrow a metaphor from Oliver’s empire. I do know that her mansion conveys a restless, brilliant, sane—if obsessive—mind and the convolutions of an uneasy conscience. Perhaps Sarah only dimly perceived the sources of her unease, whether ghostly or profane. But she wove anguish into her creation, just as any artist pours unarticulated impulses into her work. Over repeated visits, I came to think that if a mind were a house, it would probably look like this.

The House is an architectural exteriorization of an anguished but playful inner life. Ideas, memories, fears, and guilt occur to us all day long. They come to consciousness. If they displease or terrify, we brood or fuss over them for a while, then revise them to make them manageable, or we plaster over them and suppress them, or refashion them into another idea. One of the house’s builders recalled, “Sarah simply ordered the error torn out, sealed up, built over or around, or … totally ignored.” The mental and architectural processes of revision, destruction, suppression, and creation were ongoing, and similar.

Perhaps the same mental process happens with a country’s historical narratives about its most contentious and difficult topics—war, conquest, violence, guns. Sarah’s family name was synonymous by the 1900s with a multi-firing rifle, and the Winchester family had made its fortune sending more than 8 million of them into the world. It wasn’t crazy to think that Sarah might have been haunted by that idea, that she might have perpetually remembered it, and just as perpetually tried to forget.

I’ve come to see the house as a clever riddle. Sarah made charitable donations, certainly, and if she had wanted to, she could have become a philanthropist of greater renown. But the fact remains that she chose to convert a vast portion of her rifle fortune into a monstrous, distorted home; so we can now wander through her rooms imagining how one life affects others.

Instead of building a university or a library, Sarah built a counter-legend to the thousands of American gunslinger stories. And in this counter-legend, the ghosts of the gun casualties materialize, and we remember them.

,Ph.D., is the author most recently of The Gunning of America: Business and the Making of an American Gun Culture. She has published two other books and numerous essays on a wide variety of topics.

death, GHOSTS, guns, HAUNTING, SAN JOSE, what it means to be american, WHERE I GO, women