It’s late at night, and I’m staring at seed catalogues while the scripted tones of a reality real estate show—my favorite soporific—drone on in the background. An earnest young couple with a mind-blowing budget is searching for a house in an unnamed North American suburb. Their must-haves: open-concept living (does anyone enjoy living in rooms anymore?), a three-car garage, and above all a mudroom, because their three sons play hockey and have the heroic amounts of gear that kids lug around with them from dawn-streaked rink to rink.

Most mudrooms tend to be a bit more understated. They’re literally liminal spaces, areas not meant for actually living, but rather to shed the accouterments of snow, rain, and mud. In New England we have mudrooms because nature provides us with an entire season dedicated to mud. The weeks between the last real snow and the first 50-degree days are interminable. The uppermost couple of inches of ground have thawed, but the underlying frost stretches to a depth of 18 inches or more. When it rains, the water has nowhere to go. 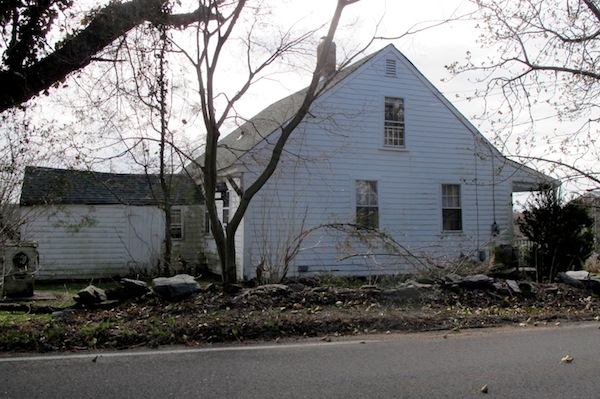 Mudroom attached to an 18th-century house in Portsmouth, Rhode Island

And then you have days marked by dark brown mud, the kind of mud that ensnares vehicles up to their axles and serves as the beginning of stories swapped at the cash register of our Agway in Portsmouth, Rhode Island. When mud-season mud dries, it leaves a chalky, caked residue on the palms of your hand and crusty clods on the soles and sides of your boots. That’s mud time, our fifth season, which is just coming to its end.

I don’t think the first European settlers were terribly concerned with mud. I spent a lot of time peeking into their houses like a creepy, time-traveling voyeur. Years ago, I used to be a professor. I wasn’t that good at standing in front of a classroom of students whose interest level could be rated as mild, but my research provided me with an excuse to while away a winter’s day studying 18th-century probate records.

When a landowner died in colonial New England, the town appointed a committee of neighbors to survey and value the possessions of the dead, so that the estate could be taxed. These committees were scrupulously exhaustive, creating detailed room-by-room accounts of the items in the house. I used the inventories to “walk through” the house of the dead, seeing everything that the committee saw as they noted, tallied, and evaluated the detritus left behind at death.

The earliest European houses in my part of New England were two-room affairs: the Hall (think Beowulf), where the family did most of its eating and sleeping, and the Great Room, where they worked during winter months. Kitchens were set in low-slung additions at the back of the house, creating that “saltbox” shape that makes the house look as if it’s rooting itself to the ground. At one end of the kitchen there was a lean-to (phoneticized from the East Anglian dialect as a “linn-too”). And that is always the most interesting part of the inventory, because it is where the surveyors find the most random items: “a box of old junk,” “some broken tools,” and in one document, memorably, “a parrot in its cage.” Out of sight, out of mind: the lean-to was the original junk drawer where the household’s funk accumulated.

As landowners grew wealthy, they built more substantial dwellings. Deeply pragmatic, they began to reuse their original houses as “the Little Houses,” where they could store their junk. (These practices are immortalized in Big House, Little House, Back House, Barn, Thomas Hubka’s classic study of northern New England farms.) Woodpiles, stacks of Long Pie pumpkins, and tools lined the floors and walls of the Little House, which you would pass on the way to the back house, or privy. Now all of the household items that weren’t worthy of deep storage in a barn or shed could be piled up, in a manner that was accessible, yet out of the public view.

Although this arrangement continued for centuries, the term “mudroom” is a late entry into architecture-speak. It first appeared in the mid-1950s, timed with the arc of tract house development and the appearance of less formal entryways at the sides and backs of houses. The suburbanites who bought these houses liked tidiness and, as more people after World War II drove automobiles, there was a desire for a transitional space between the garage and the house proper. This evolved into a mudroom, targeted mainly at kids in raincoats and muddy boots who could leave the unpleasant trappings of the exterior world behind before entering the ambience of suburban hearth and home.

The mudroom evolved with 1950s house forms that heralded a revival of colonial architecture—“Cape Cod” houses, gambrel-roofed Dutch colonials, and blocky shapes evoking garrisons on the western Massachusetts frontier. These forms, developed at the height of the Cold War, felt patriotic at an anxious time when those values were perceived to be under siege. It shouldn’t surprise us that home builders incorporated comforting features like mudrooms to connect us to our Revolutionary past, even as Sputnik soared into the atmosphere and Rosa Parks declined to give up her seat on the bus.

Mudroom marking the transition between the garage and and a 1950s Garrison Colonial house in Newport, Rhode Island

In the rural Rhode Island Greek Revival farmhouse where I grew up, the mudroom wasn’t an emotional ornament so much as a constant necessity. We used it as the prosperous farmers before us had, as a repository for unpleasant things that didn’t seem to fit elsewhere in the house and needed to be out of the public view. What to do with the expandable two-story, taloned rake used to clean ice from the gutters? It goes in the mudroom. Shotgun shells, oversized cans of Crisco, bags of rock salt: Take it down to the mudroom.

Our particular mudroom sat atop a crawl space where rats congregated. One of my winter chores involved opening the hatch to the crawl space, wriggling between the wet beams, and placing torn-open boxes of D-Con rat poison on the frozen earth. April really was the cruelest month, one that I associated less with lilacs and snowdrops and more with the lingering odor of poisoned rodents decaying under the mudroom, their open-air graves marked by middens of broken medicine bottles, pottery shards, and withered corncobs accumulated over the last century.

When I left the university, I became a farmer. I don’t have to worry whether the turnips are bored, and I finally understand the practicality of the mudroom. It’s the only place in the house I can put the broadfork, the seed potatoes, and the gleaming Ball jars of pickled peppers I put up last September. It’s a filter that snares the debris of the farm before it can migrate into the public areas of the house.

The mudroom’s sudden transformation from an open-air junk drawer to a sanitized space mystifies me. “Don’t let your mudroom become a chaotic catchall,” urges HGTV’s website, “Check out designers’ top tips for keeping your entry room organized, efficient, and most of all, well-decorated.” Don’t we need some sanctuary from the urge to live spotlessly?

Keep your well-decorated mudroom. I need some space for my parrot and my roof rake.

and his wife Michelle run Garman Organic Farm in Middletown, Rhode Island. He is currently working on a book titled Out of Eden: Life after Academia.