Where the neon lights are bright: Broadway and Times Square. Photo courtesy of Pixabay.

I first saw Broadway from the air. It was 1990 and I was flying with my architecture class from the University of Florida up to Boston so we could learn about cities. Our silver Eastern Airlines plane flew low—alarmingly low, I thought at the time—over Manhattan and soared up the island south to north, the pilot alerting us to the view of the Big Apple below. I could clearly pick out Broadway because, as I had read, it didn’t follow the grid but meandered, an errant thread weaving its way through the city.

Walt Whitman once compared Broadway to a river, and that’s what it seemed to me when I finally walked along its path a year later. Broadway really was a noisy, urban Mississippi overflowing with people, cars, and trucks, its shoreline lined with skyscrapers and bathed in electric light. Right next door to Times Square and its peep shows were churches (St. Mary the Virgin, on 46th Street, and Holy Cross, on 42nd Street) and in the middle of everything a statue of a Roman Catholic priest (Francis Patrick Duffy, decorated World War I chaplain and Holy Cross’s pastor). Coming from Gainesville, I thought the contrasts were rather extreme, and that Broadway was the most perplexing, distorted place I’d ever seen.

For many years, visitors have been thinking exactly the same thing: Illustrator Valerian Gribayedoff, a Russian immigrant, thought that Broadway was “a kind of animated mirror, looking back at you with its myriad faces in the same mood in which you regard it.” That was way back in 1893.

Even George M. Cohan, the prolific song-and-dance man who sold Broadway to the masses in the form of sheet music and traveling musicals, and more than anyone cemented the street as the epicenter of American popular culture, couldn’t quite get his head around it. “Nobody understands Broadway,” one character in Cohan’s 1912 production Broadway Jones proclaims. “People hate it and don’t know why. People love it and don’t know why. It’s just because it’s Broadway.”

Through the 19th century, Broadway was a continuous source of American civic pride, a “Path of Progress” where everything promising about the country’s future came together in one long allegorical strand. “Broadway represents the national life,” journalist Junius Henri Browne wrote soon after the Civil War. In order to see America, he suggested, all that was required was a station point along Broadway. “Take your stand there,” he advised, “and Maine, and Louisiana, the Carolinas, and California, Boston, and Chicago, pass before you.” 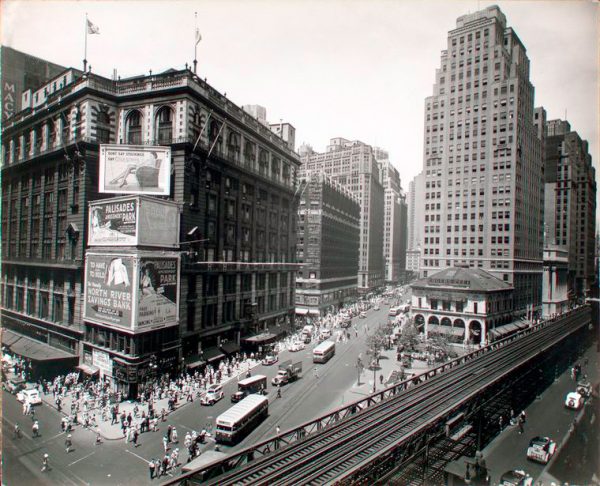 To understand its history, follow the street from south to north.

Broadway begins at Manhattan’s southern tip, where it forms the spine of the financial district and provides a stage set for ticker tape parades. Skyscrapers, including the majestic Woolworth Building, cloak the street in shadow. At the intersection of Broadway and Wall Street, administrative assistants and stockbrokers lunch amid the graves of Trinity Churchyard, where Alexander Hamilton rests beneath a monument close by a wrought-iron fence along Rector Street.

Continuing to the north, Broadway pierces SoHo, where cast-iron buildings from the mid-19th century look down on a district that 50 years ago was so desolate the city’s fire chief nicknamed it “Hell’s Half Acre.” Now it’s a mall of expensive shops for tourists.

At 10th Street, Broadway suddenly bends to the north on its way to Union Square, which began in the early 19th century as the “Forks,” the rural intersection of the Bowery and Broadway, and was enclosed as a public park in 1833. Union Square became the most fashionable district in the city—in 1865, the six-year-old Theodore Roosevelt watched Abraham Lincoln’s funeral procession pass below the window of his grandfather’s mansion at the corner of Broadway and 14th Street—and by the 1890s, the old mansions, having been torn down or converted to sweatshops, had become the main gathering place for labor unions, socialists, and anarchists.

Six blocks to the north, Madison Square was the site of riots in 1901 when the city arranged nice new chairs in the park and tried renting them for a nickel. Now you can sit for hours, for free, in folding chairs arranged in the wedge of space between Broadway and Fifth Avenue. Once that narrow space was a perpetual tangle of trolleys, trucks, and cars and on election nights, crowds pressed into the hectic intersection to watch as vote tallies were projected onto a giant screen attached to the Flatiron Building. Now that same storied section of Broadway is nothing if not peaceful, a place of beautiful, trendy people and Shake Shack burgers.

Madison Square was the original starting point of a lurid playground bathed in the glow of electric streetlights and billboards that by the early 1900s had been nicknamed the “Great White Way.” That section of Broadway became so famous, and its stores, theaters, hotels, and restaurants so profitable, that every small-town chamber of commerce had to have its own version. “[Let us] get together and have a Great White Way as soon as possible,” urged the editors of the Richmond, Kentucky, Daily Register in 1919. “It is an indication of a prosperous condition, and a progressive spirit.”

City councils in El Paso, Pensacola, Topeka, and Albuquerque were soon busy carefully planning new downtown business districts in emulation of Broadway, but the original Great White Way was an accident; even those weird, interstitial trapezoids (not squares) that became Herald Square and Times Square, two of the most vibrant public spaces in the world, were nothing more than the byproducts of the misalignment of Broadway’s angled path with the later straight avenues of the city grid. Broadway’s transformation from colonial cowpath to cosmopolitan thoroughfare was nothing if not organic.

At Columbus Circle, Broadway brushes past Central Park’s southwest corner, widens, and becomes something else entirely, a remnant from the Gilded Age that was originally called the Boulevard and was meant to put New York City on par with Georges-Eugène Haussmann’s grand boulevards of Paris. That ambitious section of Broadway was carefully designed, with a planted “mall” running up the center and whimsical apartment houses in the Parisian Belle Époque mode on either side.

The old Boulevard continues up the West Side, past restaurants, delis, and dry cleaners, all the way up to 168th Street, where in the midst of a predominantly Dominican neighborhood it takes over the narrower path of the former Kingsbridge Road, which dates to the early 18th century. At the island’s northern tip, Broadway crosses over the Harlem Ship Canal by way of the Broadway Bridge, continues through the Bronx, and, as Route 9—not so much Great White Way as Adequate Grey Highway—winds its way to the Canadian border.

“Broadway,” Whitman also wrote, “will never fail in riches, arts, men, women, histories, stately shows, morals, warnings, wrecks, triumphs—the profoundest indices of mortality and immortality.” That’s another way of saying that Broadway is much too long and varied to understand in one lifetime. Stephen Jenkins, writing in 1911 in The Greatest Street in the World, thought that Broadway was the place where New Yorkers felt most at home.

I’m not sure I’ll ever feel at home on Broadway, but at least I understand it a bit better than I did when I saw it for the first time almost 30 years ago. Perhaps Broadway resonates because it’s a place where anyone, native or immigrant, can freely wander, like the cable cars Stephen Crane described in 1896 as plying the street “up and down, up and down, in a mystic search.” For some, Broadway might even reveal the key to happiness.

“I guess Broadway, for me, was everything in life I’ve never had,” George M. Cohan once said. “My education, and the friendships, games, adventures, and just plain fun of boyhood and growing up.”

Fran Leadon is an architect and author of Broadway: A History of New York City in Thirteen Miles, published this month by W. W. Norton & Co.