Just-picked cranberries drying on newspaper, the day after a hard rain. Photo by Beverly Wright.

Many know the place I live, an island off the southern coast of Massachusetts, as Martha’s Vineyard, a vacation spot for celebrities including Presidents Clinton and Obama. But those of us in the Aquinnah Wampanoag Tribe know it as Noepe, our home for at least 13,000 years. Though the whole island used to be our traditional homelands, today, our homelands form the westernmost part of the island, centered on the Town of Aquinnah and including many cranberry bogs. It’s there—on the beach, near the bogs—that we celebrate, every second Tuesday of October, Cranberry Day.

On Cranberry Day, we gather to eat, drink, and celebrate together. It’s a day for remembering and maintaining a way of life. The Aquinnah Wampanoag is a small tribe, with a membership of approximately 1,300, which makes remembrance even more important. Despite contemporary technology, Aquinnah Wampanoags are oral people, and it is up to the Elders to carry our stories, ceremonies, and traditions forward. My grandmother used to say, “if you show up at a tribal function and you are the oldest one there then you are an Elder.”

Cranberry Day has been a big holiday for the Aquinnah Wampanoag people for a long time. Tribal children are excused from school. Relatives come from the mainland. Families prepare food for days. There might be chowder, various kinds of fish, clam fritters, stuffers—stuffed quahogs, or hard-shell clams —and potato bargain, a dish made of potatoes and salt pork that was called “bargain” because potatoes and salt pork used to be especially economical. Also blueberry slump, which is like a cobbler; Johnny cake; and my favorite, seaweed pudding—made from boiling native seaweed, which coagulates and forms a custard all on its own. 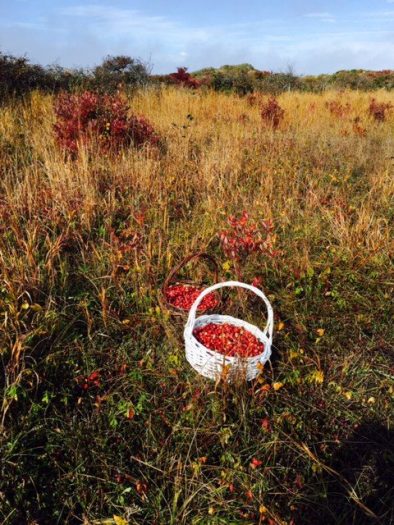 On Cranberry Day we make a bonfire, eat, and pick cranberries. Cranberry bogs form in the lowlands between sand dunes, where the fruit grows on low-lying vines in bogs or marshes layered with sand, peat, clay, and fresh water. Windy days can leave a layer of sand from the dune which stunts the growth of weeds and prevents insect infestations. The bogs are owned by the tribe as part of our trust lands. Only tribal members can pick there. Our tribe has been tending some bogs and vines for over two hundred years. Long ago, Elders decided that the bogs would not be commercialized—that is, not be weeded and flooded and otherwise manipulated to create a bigger crop, as Ocean Spray or other commercial growers do. This means that some years there are no cranberries and the next year the bogs overflow. The Great Spirit takes care of it.

In past years most of the cranberries we picked would be sold on the mainland to supplement tribal families’ income. But today, most people freeze the berries to use over the winter for cranberry bread, sauce, pies, chutney, tea, and jelly—plus, stringing cranberry garlands for the Christmas tree. You don’t even have to freeze them. My grandmother would keep cranberries “under the eaves” in the attic, where it was just cold enough that cranberries would keep. All winter she would say, “Go under the eaves and get me a couple of cups of cranberries.”

Cranberries form an important part of New England history. Wampanoag men have always been great sea warriors, sea captains, and harpooners—Tashtego in Moby Dick is a Wampanoag. Whaling vessels would store barrels of cranberries below deck for the long voyages. Cranberries are a good source of vitamin C and would help stave off scurvy.

My earliest memory of Cranberry Day comes from when I was five or six. I was allowed to stand at the roadside early in the morning before the sun was up with my cousins and wait for one of my relatives, Jack Belain, to come along with his team of oxen and cart. He would pick up all the kids along the road and then cut off at the cow path over the sand dunes, past the blueberry bushes and beach plum bushes, and come out at the cranberry bogs. As kids we were glad to get there early before the grown-ups arrived so we could pick out our spot on top of the dune for the cranberry races.

Races began after lunch, when we children had eaten our full. The crust of a sand dune makes an excellent racetrack. We would look for the biggest round cranberries and pick our partners. Whoever was at the top would roll the cranberry down and the partner at the bottom would catch the berry and throw it back to the top. The race would usually end when someone fell down the dune and broke the crust.

These days, we still meet at the bogs early in the morning but mostly come by car. Tribal members live all over the country. Some can’t return for Cranberry Day. I always send a box of fresh picked berries to my grandson in Denver.

And since the town is no longer home to only tribal members, we invite our neighbors to a potluck dinner at our community center at the end of Cranberry Day. The harvest of the day is on full display. We drum, sing, and dance and offer blessings to the Creator for the harvest and hope for the next year.

At night, Elders tell stories about our history and our home.

Beverly Wright is former Chairwoman of the Wampanoag Tribe of Gay Head/Aquinnah.