Tens of millions of Americans have hit the road this summer. The all-American road trip has long been a signature adventure, but once upon a time the notion of your own motorized excursion of any length would have seemed impossible.

In 1900, Americans were hampered by wretched roads and limited by the speed and endurance of the horses that powered buckboards, coaches, and wagons. If they had an urge to travel far distances, they had to rely upon the steam locomotive.

As fantastic as it might have seemed at the turn of the 20th century, the idea of supplanting the iron horse with the horseless carriage did catch the fancy of some intrepid men and women. Eager to test the technological limits of their new contraptions, a few hardy souls set off upon far-reaching expeditions between 1900 and 1910.

Colorado attorney Philip Delany, recounting his 1903 excursion from Colorado Springs to Santa Fe, observed, “and so the machine is conquering the old frontier, carrying the thudding of modern mechanics into the land of romance. . . .” Such travel meant seeing “the wildest and most natural places on the continent,” encountering more than a few hints of danger on steep and rocky mountain roads, and reliving the exploits of American pioneers. “The trails of Kit Carson and Boone and Crockett, and the rest of the early frontiersmen,” he declared, “stretch out before the adventurous automobilist.”

Upper-middle-class tourists motored through the countryside and then camped by the side of the road, finding the sentimentalized image of the gypsy or the tramp quite a compelling identity to assume. They reveled in their sense of independence from stodgy summer resorts and the tyranny of inflexible timetables set by railroads or steamship lines. They delighted in the beauty and serenity of unspoiled countryside. In the same article quoted above, Philip Delany observed that “when [the automobilist] is tired of the old, there are new paths to be made. He has no beaten track to follow, no schedule to meet, no other train to consider; but he can go with the speed of an express straight into the heart of an unknown land.” 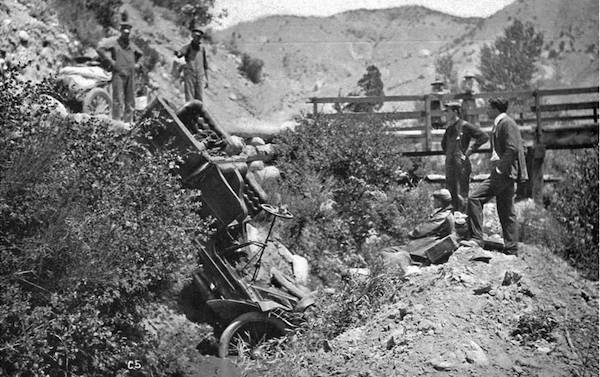 Image from Marcus Karup’s article “From Coast to Coast in an Automobile,” World’s Work, May 1904

In its infancy, however, an automobile could not deliver most Americans from their urban frustrations—for most Americans could not afford to own and operate one. At a time when average annual salaries might not reach $500, many automobiles might cost between $650 and $1,300, securely beyond the grasp of all but the wealthiest. Moreover, with few garages, filling stations, and dealerships outside of city limits, even the infrastructure required for the care and feeding of the automobile could be difficult to locate and could drain the motorist’s wallet. During their earliest years, neither automobiles nor auto touring could be considered within the reach of the masses. Automobility would only become pervasive over time, thanks to rising wages, falling prices for used cars, expanding opportunities to buy these machines on credit, and, especially, the introduction of Henry Ford’s revolutionary Model T in 1908.

Even for those Americans who could afford the first horseless carriages, to go off the few familiar paths in most parts of the country, especially in the great distances of the trans-Mississippi West, required a large measure of self-reliance. One motor traveler characterized the roads of his native Wyoming in 1909 as “deep ruts, high centers, rocks, loose and solid; steep grades, washouts, or gullies . . . ” He went on to note that, “unbridged streams; sand, alkali dust; gumbo; and plain mud, were some of the more common abominations.” Between the obstacles presented by such abysmal road conditions, the likelihood of frequent mechanical breakdowns, and the rarity of supplies to sustain driver and vehicle, these early outings always required an audacious spirit.

Aspiring long-distance auto tourists back then were counseled by self-proclaimed experts to carry abundant quantities of supplies. Those who made the first transcontinental drives between 1901 and 1908 hauled along ropes, blocks and tackle, axes, sleeping bags, water bags, spades, camps stoves, compasses, barometers, thermometers, cyclometers, first aid kits, rubber ponchos, tire chains, pith helmets, assorted spare parts, and sufficient firearms to launch a small insurrection. Mary C. Bedell’s impressive list of gear, published in her entertaining 1924 account of auto touring, Modern Gypsies, typifies what was carried by the most dedicated motor campers both in scale and variety: “tent, duffle bags, gasoline stove, Adirondack grate and a kit of aluminum kettles, with coffee pot and enamel cups and saucers inside”—an array of equipment that added “four or five hundred pounds” alone to the weight of the fully loaded automobile. A car so laden, puffing along western trails, bears a striking resemblance in the mind’s eye to a hermit crab staggering across the ocean floor burdened with its house on its back.

Even as motoring Americans loaded up their cars with the contents of their local hardware stores, however, the growth in their numbers year by year provided alluring prospects to entrepreneurs in small towns and great cities throughout the West. Garages, gas stations, roadside cafés, and diners began to pop up along more frequently traveled routes while hotels, restaurants, and general stores started to advertise in the earliest guidebooks produced by organizations such as AAA and the Automobile Club of America. Following the lead of Gulf Oil in 1914, gasoline retailers commissioned maps branded liberally with their logos for free distribution at their service stations. Motorists once left entirely to their own devices now encountered a rapidly evolving infrastructure of goods and services. 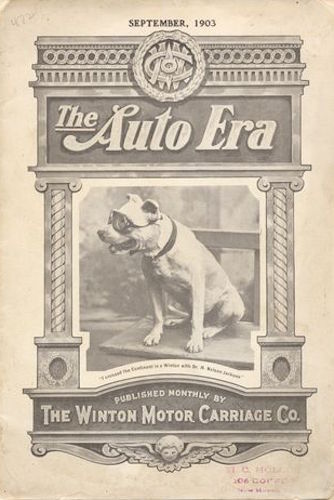 Cover of The Auto Era, featuring Bud the dog, a passenger on an early cross-country automobile trip

Meanwhile, governments at the local, state, and federal levels began to invest increased engineering skill, construction efforts, and tax dollars in road improvements. While motor tourists by the end of the World War I might still encounter 10,000 miles of battered gravel trails littered with potholes for every 10 miles of carefully surfaced and maintained roads throughout the country, the increasing pace of improvements made it far easier to drive through the West than it had been for those who had attempted such a journey only a decade before.

Although still new to the American scene by 1920, the road trip thus had begun to take on a shape familiar to modern eyes. Above all, the automobile was assuming a dominant role in popular recreation as more and more Americans incorporated it into their visions of recreation and leisure. As costs fell and reliability increased, as the successful outings of the few began to inspire the many, and as the thrill of this new technology spread through an ever-wider range of the populace, motoring for pleasure insinuated itself as a notion in the minds of many Americans. Indeed, less than a decade after the turn of the 20th century, author William F. Dix could assert that the automobile had become nothing less than a “vacation agent” for motor-savvy Americans as it “opens up the countryside to the city dweller, [and held out the promise of] great national highways stretching from ocean to ocean and from North to South.” Over those highways, he continued, “would sweep endless processions of light, graceful, and inexpensive vehicles . . . carrying rich and poor alike into a better understanding of nature and teaching them the pure and refreshing beauties of the country.”

While Dix fell far short as a prophet of social or technological developments, his sense of how inextricably linked the automobile would become in the leisure pursuits of Americans has been thoroughly borne out by the evolution of the American road trip.


He wrote this for What It Means to Be American, a national conversation hosted by the Smithsonian and Zócalo Public Square.

cars, history, road trip, transportation, what it means to be american