The windows of Marie Laveau's House of Voodoo in New Orleans. Courtesy of Adam Shirk.

Any tourist who rolls into New Orleans’s French Quarter eventually finds themselves standing before a Bourbon Street botanica called Marie Laveau’s House of Voodoo. It’s a small shop, and the front window is cluttered with the materials of a spirit altar: candy, bones, saint figurines, jewelry, sugar skulls, and a small porcelain statuette of the woman in blue herself, wearing her signature orange tignon: Marie Laveau.

Wander inside the shop, and you’ll find every surface packed with totems, oils, potions, pendants, plastic souvenirs, herbs, and unmarked satchels of gris-gris; a variety of Laveau effigies for sale; and small back rooms for tarot and psychic readings. The whole place toes that line one finds all over the city of New Orleans, which presents itself as both tourist pap and the genuine article. But the blurring of that line comes as no disrespect to the shop’s namesake. Marie Laveau, ostensible founder of American Voodoo, was very familiar with borderlands, with following that thin line between the sacred and profane.

Though they have often been overlooked or erased from the official record, prophetesses like Laveau have populated the American scene since the beginning—spiritual innovators and religious visionaries like Shaker messiah Ann Lee, godmother of liberation theology Sojourner Truth, Christian Science founder Mary Baker Eddy, and evangelist Aimee Semple McPherson, among many others. Marie Laveau strikes me as the most fundamentally American of them all. 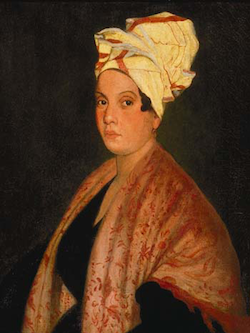 This painting, produced in 1920, is purportedly a copy of an earlier painting made of Marie Laveau by George Catlin in 1835. Courtesy of the Louisiana State Museum.

Laveau was born in New Orleans in 1801 (or, according to some accounts, 1794) as a free person of color, descending from a long line of enslaved foremothers. Her parents were both mixed-race, free, though hailing from different lines of the Caribbean slave economy. Not much is known about their genealogies or relationship. Likewise, the particulars of Laveau’s childhood and early adulthood are made of layer upon layer of contesting legend. Was she widowed or abandoned by her first husband, Jacques Paris? Did she have two children or seven? Did she acquire her political intel as a hairdresser? Which female relative trained her in conjure? What we do know for sure is that by the middle of the century, Marie Laveau was a Voodoo (or Voudou, or Voudun) priestess of high repute, presiding over a multiracial, multiclass, multidenominational following.

Her spiritual dominion over New Orleans ushered in a distinctly American Voodoo, one that was more porous and flexible in its influences and practices, encompassing more gods (or “Iwa”) than the Haitian Voudun that had been passed down to her mother and grandmother and great-grandmother before her. Marie Laveau is thought to be American Voodoo’s earliest public practitioner—and in this way, its prophet. From the 1820s to the 1880s, she was famous across the land. People traveled to her from far and wide for counsel, ceremony, remedy, and insight, and her clientele knew no bounds: poor, rich, white, black, free, enslaved, slave-owning, she administered to them all—and not infrequently she administered to them all at once, together.

Laveau’s community ceremonies took place in big, public spaces like the shores of Lake Ponchartrain and the paving stones of Congo Square, as well as in the private homes of the elite bourgeoisie. Her St. John’s Eve summer solstice ceremonies saw people from every stratum of New Orleans public life, observing sacred rites of annual renewal. In doing this, she wasn’t changing the social structure but instead highlighting what was already there. Her theology and teachings were syncretic, drawing from her experiences in the Catholic church and the Ursuline nuns who, according to her biographer Martha Ward, likely educated her, and above all from the traditions transmuted during the Middle Passage to the Caribbean, where her maternal great-grandmother had been trafficked generations before. Catholic saints took on the names of Hatian Iwa (gods), and vice versa. But even those traditions, by the time they reached Laveau, had been filtered through encounters with other Afro-Caribbean religions like Santería and Yoruba, and even North American indigenous ceremony. It’s the sheer volume of influences and variety, and the scope of her reach, both in her theology and in her following, that seem so deeply in keeping with the long project of American religion-making.

The history of that project has long been told through the experiences and viewpoints of white men, but there have always been a much more diverse set of prophets among us. A prophet is someone who talks to god (or the gods) and brings messages back to the flock. A prophet typically offers a new interpretation of a sacred tradition or text that points toward not only reconsidering the practices or premises of institutionalized religion, but also toward significant social change. A prophet is not a saint and may not be concerned with achieving perfection or ascension or even enlightenment. Prophecy happens to the prophet. In fact, prophets are traditionally made into freaks: so strange or countercultural, presenting an image or carrying a message that is so unwelcome, that they are cast to the margins or the wilderness.

If there is a single big takeaway from looking at the history of American prophetesses, it’s that the project has always been about freeing belief systems from powerbrokers.

As such outcasts, America’s women prophets were already in a difficult position. Living under patriarchy put them in a double bind of public doubt—which for Laveau, as a black woman, was a triple bind. So they had to assert their power in unusual ways, trying both to “contest the [male] monopoly of the pulpit” (to quote the 1848 Women’s Rights Convention’s “Declaration of Sentiments”) while claiming special access to the truth as “outsiders.” This position became more possible for women to assume as the 19th century’s Second Great Awakening unfolded, essentially “awakening” the white public’s belief that anyone—regardless of race, class, sex or age—could have direct access to God, and so more and more, the prophetesses’ outsider status emboldened the public’s regard for her.

While different American prophetesses’ truths may have varied in content, they all endeavored to make the same basic intervention: to spell out or live out their tradition’s concealed wisdom, according to the God (or gods) with whom they communed. They wrested interpretive authority over traditions that had been talking to, or about, them for millennia. In keeping with American tradition, their movements were self-invented, and their images self-made. The American religion scholar Catherine Ann Brekus notes in her book Strangers and Pilgrims: Female Preaching in America, 1740 -1845 that because women’s contributions to religion have been continually stymied or scrubbed from the official record, their history is “characterized not by upward progress, but by discontinuity and reinvention.” But this has struck me as something that, maybe only incidentally, keeps their contributions vital, because they are difficult to appropriate.

Many prophetesses shared a particularly American canniness when it came to navigating the free market to convey their theology. Mary Baker Eddy busted into the for-profit publishing sector (books and newspapers), Sojourner Truth produced a wide array of merchandise (paperback autobiography, self-portrait tintypes), and Aimee Semple McPherson monetized the airwaves (on radio, and almost TV). The private sector provided prophetesses the means to ascend, where the churches had otherwise barred them access. Another commonality was their ability to create an enigmatic public image, of staying just barely out of reach, but also very vivid to people at the same time. Sojourner Truth renamed herself under divine influence. Mary Baker Eddy wrote dozens of conflicting autobiographical accounts. Aimee Semple McPherson is widely believed to have staged her own fake kidnapping, after which she still retained tens of thousands of followers.

Marie Laveau encompassed all of these aspects of American prophetesses, and far more. As a business and property owner, and a personal hair stylist, she developed enduring relationships across the complicated caste system of 19th century New Orleans. Her spiritual work had multiple dimensions, beyond her ceremonies: Biographer Carolyn Morrow Long has unearthed records of her prison activism, including her ministry to men on Death Row, and of her unparalleled triage work during the Yellow Fever epidemic. Martha Ward has pieced together a history of her efforts to liberate slaves by purchasing their freedom, revealing how Laveau’s spiritual practices were part and parcel with her vision of human rights.

And yet, however much we feel we know about her and however much she’s been inscribed on the city of New Orleans—through monuments like her oft-visited grave in St. Louis Cemetery No. 1, through shops in the French Quarter, through the New Orleans Voodoo Museum, or through her very spirit—Laveau left no written record whatsoever. Everything we know about her is from census or secondhand, cobbled together from dozens of secondary sources, including contemporary biographers, the oral histories of old-timers recorded by Zora Neale Hurston during the Depression, Robert Tallant’s tall tales, novels, yellow journalism, and folk songs. This adds to her legendary power: We cannot pin her down. We can only trace her edge. The archive of her life and ministry requires our collective imaginations. People can write over her or appropriate her, contest each other’s memories or decrypt public records, but she will always own her story. The truth of her life will remain just out of reach to the rest of us.

If there is a single big takeaway from looking at the history of American prophetesses, it’s that the project has always been about freeing belief systems from powerbrokers, contesting the “monopoly of the pulpit,” and making way for a highly personal truth. Women like Marie Laveau had to elide the powers that be, to tap into the deeper source. Her prophecy was embodied by the community she created, which represented what America had always been and would always be: diverse, multiracial, contradictory, syncretic, mystical, stratified, racist, and only thinly democratized. Laveau embodies all of the complexities of this country, its religious and racial and cultural confusion, its violence and madness, and resolves all of it in her person and her theology. She contains multitudes—whether real or imagined. That’s where her prophetic vision issues from. It’s less that she had a specific prediction of the future, and more that she was the future.

Adrian Shirk teaches in Pratt Institute’s BFA Creative Writing Program and is the author of And Your Daughters Shall Prophesy: Stories from the Byways of American Women and Religion.