I was born in our nation’s capital in the early 1970s—but sometimes when people see me in my turban, they think of conflicts in faraway lands, terrorism here at home, Hollywood caricatures, and sensationalized news coverage.

Donning the costume of a superhero—complete with unitard and shield, in addition to the turban of my Sikh faith—changed all that. Suddenly, there was no question that I was American.

Like any good comic book, there’s an origin story. One that covers moving thousands of miles away from home after high school, trying to make my superpower invisibility, and fending off a constant barrage of hate speech.

Sikhs believe in the innate equality of all, striving to merge with energy that traverses every speck of the universe. Fighting against injustice and practicing the art of compassion are part of our spiritual practice.

As a physical manifestation of this journey, Sikhs must don long, unshorn hair as a natural extension of the human form. This was how I grew up experiencing my faith, though otherwise I had been brought up fairly secularly. (Our Sunday ritual was a trip to the butcher to buy fresh meat, rather than a temple visit.)

I first experienced hatred directed at me because of my religion in India, where I spent much of my childhood after my parents moved the family back to their country of origin in 1975. Following the assassination of the Indian Prime Minister Indira Gandhi in 1984 by her two Sikh bodyguards, Sikhs were hunted down on the streets of many Indian cities.

We were fortunate to survive the fury of an angry mob that surrounded the apartment building where my family lived in New Delhi. But many Sikh men and boys would not be so lucky. Many were burned alive by having gasoline poured over them and lit on fire across the Indian capital and other cities.

When I graduated from high school, I moved back to the United States, hoping for a calmer transition to adulthood in Los Angeles. However, I began to encounter hatred of a different variety: offensive calls of “genie,” “clown,” and “raghead;” and laughter at my appearance.

In college, I felt overwhelmed at being stereotyped so much that, by sophomore year, I decided to take off my turban and clip my long hair, which had not been cut since I was born. After a short trip to the barber, all eyes were suddenly off me. I had magically transformed and did not stand out anymore.

I wouldn’t don a turban again for almost 10 years. First, I would fall in love with the words of Asimov, Plato, Nietzsche, Abbott, and Freud. I would explore meditation, Buddhism, and Taoism. Finally, I came back around to the Sikh faith through experiences with the religion’s music.

In August 2001, I put my Sikh turban back on. Only a month later, the horrific Sept. 11 attacks happened. As we watched the TV, shocked and horrified on that terrible day, I remember a coworker looking at me with bloodshot eyes, on the verge of tears, as if I was somehow responsible for these attacks. That was a prelude to a new normal in America that would look at my turbaned and bearded countenance as the ultimate “other” in our midst. The most common racist insult hurled my way ever since has been “Osama,” even after bin Laden was killed.

In the aftermath of Sept. 11, after people who look like me were the victims of hate crimes by bigots across the United States, a piece by Pulitzer Prize-winning cartoonist Mark Fiore would change the course of my life. Fiore’s animated cartoon entitled “Find the Terrorist” prompted users to click on the faces of people of all races and countries of origin as a way to point out our own witch-hunting tendencies and prejudices.

The cartoon so powerfully captured my identity and feelings that it inspired me to create my own cartoons featuring Sikh protagonists. In late 2002, my website Sikhtoons.com was born—and it has since provided a way to channel all my whims, frustrations, and inspirations, in cartoon form.

As my website gained attention, I began traveling across the U.S. to showcase my work and host cartoon workshops, mostly at Sikh gatherings and events. In 2011, in preparation for my first trip to the New York Comic Con, I drew a bearded Captain America wearing a turban, inspired by my experience on the streets of America and the release of the Captain America movie that summer. With a flash, reality and fiction collided to present this vision in my imagination.

A photojournalist named Fiona Aboud saw the drawing at the convention and suggested that I come back next year actually dressed as Captain America myself. I swiftly responded, “No.” I had never worn a costume, ever, and being teased my whole life for my skinny frame had further taught me to avoid drawing attention to myself.

Almost a year later, the massacre of six worshippers at a Sikh temple in Wisconsin in 2012 at the hands of a white supremacist prompted me to pen a few cartoons and an op-ed in the Seattle Times, making the case for a new American superhero who doesn’t take on Nazis, mad scientists, or communists, but rather takes down the real evil-doers in our society: those who commit hate crimes.

More than ever, we need a hero to fight intolerance and suspicion of people who are not like us, forces that are ripping our country apart. Fiona emailed me after reading the piece and made a second request for me to dress up as Captain America. This time I agreed to her request for a photo shoot on the streets of New York City. 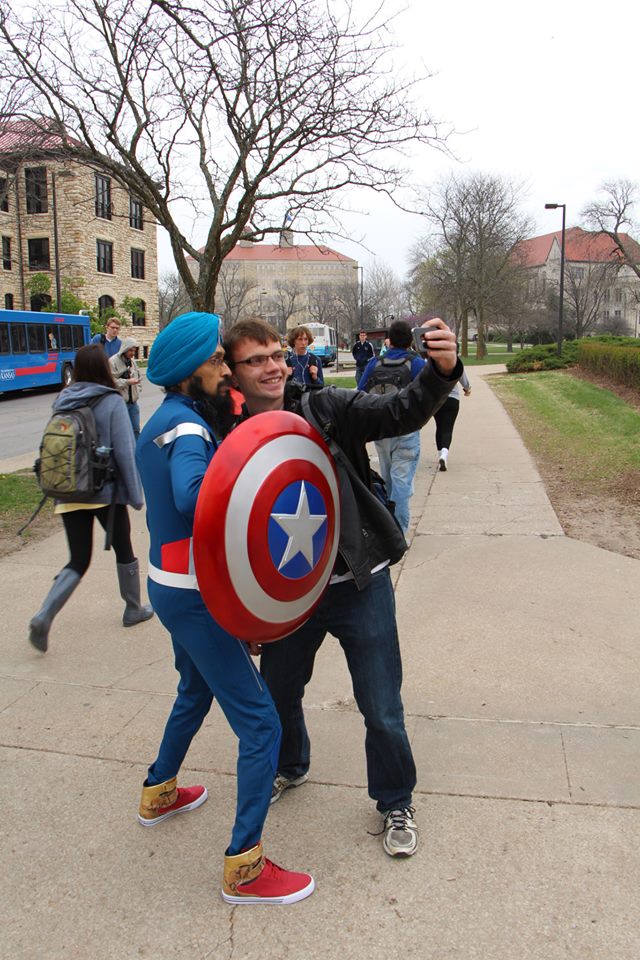 The shoot took place on a sunny summer day in 2013. It was one of the most amazing days of my life. Hundreds of onlookers snapped pictures of me and with me; police officers posed with me in photos for their kids; strangers hugged me; and I even got roped into participating in a wedding party (complete with a photo-op with the bride and groom).

An essay I wrote about the experience on Salon.com, which had six photos from Fiona’s shoot, went viral, gathering over 50,000 likes on Facebook. The images in the article keep finding a home to this day, on blogs and websites around the globe.

I have now traversed the country in my spandex uniform (later upgraded to the one featured in 2014’s Captain America: The Winter Soldier), from New York to Los Angeles, Kansas to Mississippi. My trips have taken me to universities, museums—even the backstreets of NYC with a late night comedy crew—to see corners of America I never thought I’d be invited to.

I have received messages of support from Americans in every walk of life: police officers, veterans, active service members, teachers, conservatives, liberals, men, women, black, white, Asian. The embrace of fellow Americans re-enforced my belief that we have much more in common than our eyes lead us to believe, that we all want to believe in a superhero that embodies the goodness of America, even if that superhero doesn’t resemble the clean-cut Chris Evans. And we can all have a good laugh about what I look like in a unitard.

Along the way, I have learned how much my own insecurity about my body keeps me from taking risks, and experiencing life’s many surprises.

I know comic superheroes are not real. In the American tradition, they have long been an extension of the imagination of many young immigrants. Young Jewish Americans of Eastern European descent, who survived the Depression era and battled forces of anti-Semitism, wound up creating one of the most iconic of superheroes—the Man of Steel, Superman.

Superheroes are always in our midst, in a sense. It turns out that just the uniform of a fictional character from the early 1940s, Captain America, created to fight with Axis powers in World War II, does possess a real superpower: It opens doors to new conversations and new visions of what our country can look like as its best self.

is leading a double life. By day, he is a software analyst. By night (and on weekends), he creates cartoons that can be consumed at Sikhtoons.com. He can be reached at @sikhtoons and vsingh@sikhtoons.com.