As I stood in the humid, dank cell, I found myself hesitating a bit, peering down into the cavernous doorways of the male slave dungeon of Ghana’s Cape Coast Castle. It was April 2001, more than a decade before President Obama would visit there. The worn brick-lined corridors told eerie tales of thousands of African captives held in cramped spaces, sometimes for months, standing shoulder-to-shoulder in their own excrement. That excrement, after 200 years, had hardened and raised the floor level some 2 feet—and made up the floor I was walking on. The decay of human waste stretched from wall to wall, and on those stone and mortar walls I could see the finger scratches of a people desperate to claw their way free. 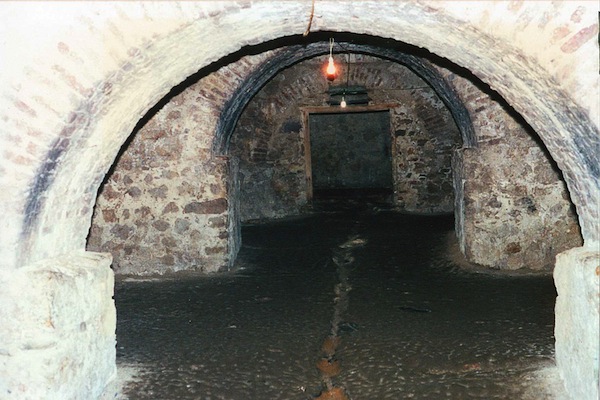 The dungeon where the slaves were kept at Cape Coast Castle.

Viscerally, I knew that someone related to me likely started his or her journey here centuries ago, that I had a kinship to “The Slave Coast,” where millions of Africans were sold into domestic bondage and transported to Europe and the Americas between 1665 and 1807. I had read Alex Haley’s Roots. But that was his story, and those, his people. The stories I had heard throughout my childhood were not of the kings and queens stolen from an African homeland, but of everyday warriors here who fought and died for my rights to vote; to go to school; to choose where I would live, and whom I would love. They were my father, who fought in the Vietnam War as a United States Marine (my brother, a second-generation jarhead who fought in the Persian Gulf conflict); they were my mother, the first in her family to graduate from college (me, the first in mine to earn a master’s degree). My people were architects and game-changers; innovators and writers; preachers, teachers, chefs, and hope-builders; they were black, proud, and American—like me. 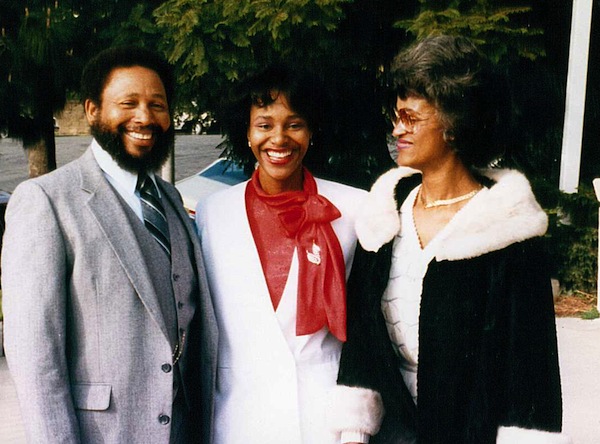 A family photo in front of First A.M.E. Church, Los Angeles: L.A. Littlejohn, Sr. (her father), the author, and Jane Littlejohn (her mother).

Days earlier, stepping off the plane into the bustling city of Accra, never had I been surrounded by so many faces that looked like mine, and yet I felt as foreign among them as I had years earlier on a trip to Tokyo. Having African ancestry and black skin did not make me a sister but a stranger with my neat, fresh-from-the-salon, straw-curled ’fro now seeking to connect. This journey to Ghana became a rite of passage to a new consciousness of my own Americanness.

Unlike some friends I knew, I didn’t have an emotional tether to the “Motherland.” This was not a trip I’d planned to take and, at the start, it wasn’t about me. This was work: a freelance assignment for Essence magazine, to document a Canadian woman’s journey through the region for a travel series on what is now WE tv. The 10-day expedition took me into the crowded marketplaces of Accra and Kumasi, where women transported food on trays atop their heads; to remote villages slicing cocoa pods from large stalks, stamping Adinkra symbols into fabric with Kente craftsmen, and fishing in tiny wooden boats in Elmina.

Everywhere I went, someone from my probable ancestral homeland sought to connect me to the tribes in my African lineage: the shape of my eyes, the angular point of my nose, the texture of my hair, the color of my skin. All telling signs of my heredity. And yet with each tracing of my face, it brought me closer to home, to my America.

Trying to articulate that feeling is a little easier now than it was back then when I launched into a discussion with a young African waiter at the hotel restaurant in Kumasi about the connections between Africans and black people from America. I was 33 and, up until then, had never really been challenged on such matters of race, culture, and identity. His was a cynical viewpoint, that the only interest blacks in America had about the African continent was Kente cloth and hairstyles, a commercialized appropriation of the culture which was being, at best, misappropriated. He accused us of decorating our homes with African masks and statues while knowing nothing of the heritage. He laughed at the very idea of Kwanzaa.

“How many of you African-Americans would trade your lives in America for one here in Africa?” he asked. He answered himself: “Not many.”

Then he asked, “Are you black or African-American?”

He sneered when I replied, “Black.” He defined “African-Americans” as those who look African (which I was told I do) as opposed to “black” which, for Ghanians, are people of East Indian lineage.

For me, it was more complicated. I was born “black” in the late 1960s to my mother who, in 1940, had been born “colored”; and to my father, born “Negro” in 1944. I was in high school when Jesse Jackson proclaimed us all “African-American.” My father’s people were servants who came to the U.S. from Scotland (and the surname, Littlejohn, from the Englishman for whom they would later work); my mother’s maternal family tree traces back several generations to an Irishman and a Native American woman from an unknown tribe.

Growing up in Los Angeles, my childhood felt no different from that of my peers of other hues: there were the annual trips to Disneyland, Magic Mountain, and Knott’s Berry Farm; Dodger games; snowball fights in the San Bernardino Mountains; and summer road-tripping from California to wherever our Dodge motorhome would rumble.

I was a deft skateboarder and roller skater. I learned to ride my bike at Dockweiler Beach in the South Bay, where my parents, brother, and I would go on late-night grunion runs in June with my best friend Rochelle, her mother (of Japanese and Anglo lineage), and her father (black). And despite her mixed roots, fair skin, and long, fine brown hair never to be singed by an iron pressing comb, Rochelle was still just as black as me. 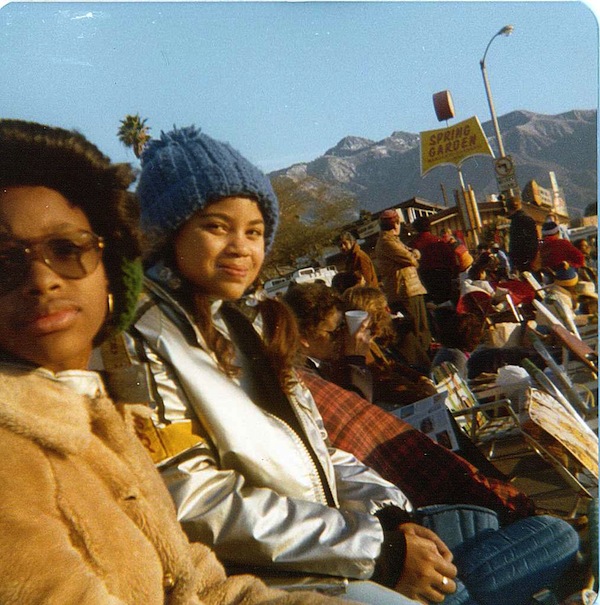 The author, enjoying the Southern California winter at the Rose Parade with friend Rochelle Ginyard in 1980.

Granted, I didn’t look like the California girls that the Beach Boys sang about, but I connected as much with Sally Fields’ Gidget as I did with Cicely Tyson in Sounder and The Autobiography of Miss Jane Pittman, the stories of groovy West Coast girlhood and the centuries-long struggles of black womanhood.

By the time I was in junior high school, my parents had moved us from our cozy three-bedroom home near Inglewood into a sprawling two-story, four-bedroom View Park place that my dad’s sister often referred to as “The White House.” We were blue-collar middle class, not quite the Huxtables from TV, but there was a family just like them who lived across the street: a doctor, an educator, and their six well-adjusted, scholastically successful, good-looking kids. From our hilltop neighborhood, we were the embodiment of the American dream, and Martin Luther King, Jr.’s.

My blackness was born out of a particular American experience; raised on gospel music, jazz, and a wooly-haired, brown-eyed Jesus who was black like me; reared on the Southern cuisines that my mother learned to prepare as a caterer for white families in her Cleveland hometown; disciplined by those values of respecting one’s elders, hard work, community, and achievement.

In Africa, I am obruni, which, in the most literal terms, means “white man,” or “foreigner.” It was how I was referred to many times while in Africa. It was not meant as an insult, just an acknowledgement that I was not of that land, no matter how deeply my roots ran through it.

Someday I will to return to Ghana, for a journey that is my own, maybe on safari in the northern region, or with my parents on a holiday vacation in Accra. (Stories I’ve heard of Christmastime there sound not unlike summer break beach parties in Miami.) But not before I make that trip to Scotland and to England, where I am told I’ll also find a lot of my people.

is a journalist and co-author of Swirling: How to Date, Mate, and Relate Mixing Race, Culture, and Creed (Atria/Simon & Schuster). Her first screenplay, Lovers in Their Right Mind, a cross-cultural love story, is in second round consideration for the Sundance Screenwriters Lab.

Photos courtesy of Janice Rhoshalle Littlejohn. Lead photo: The author (in the middle, with the white T-shirt) visiting a fishing village in Ghana.