Washington Restaurant with bicycles in front. Courtesy of the Museum of Riverside, Riverside, California.

In 1905, cyclists gathered in Riverside, California, for an inaugural meet on a new racing track. About 60 miles inland from Los Angeles, Riverside was a heralded cycling center, home to one of the largest leagues of bicyclists in the state and to frequent regional cycling competitions, but this race looked unlike any other previously promoted in the region because the new track had been funded by the Riverside Japanese Association.

The association’s brand-new Adam’s Track was supposed to promote commerce and community relations. Japanese-American cyclists arrived at the track riding the latest racing models and dressed in bold cycling uniforms. Residents of all backgrounds arrived from throughout Southern California to celebrate opening day, an event preceded by fireworks and a military band. The debut of the track, which was designed for fast-paced, exciting racing, celebrated competitive cycling among Japanese-American riders, who were moving to Riverside county in increasing numbers.

In the 1890s, cycling became a popular pastime all over the U.S., in immigrant and nonimmigrant communities. It was particularly widespread in the semirural communities of inland California, where workers used country roads that connected scenic groves to navigate the flagship citrus industry.

In the town of Riverside, where 75 percent of Riverside County’s Japanese and Japanese-American population resided, bicycling brought the community together, elevating their place in the broader local society. But within a short period of time Riverside’s bicycle friendly roads also became treacherous places where police used surveillance and racially targeted laws to limit Japanese-Americans’ movements and to enforce their separation from their white neighbors. 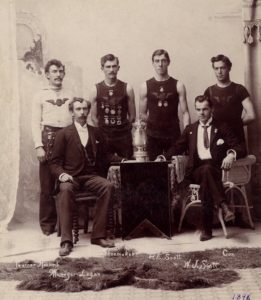 Riverside Wheelmen. Courtesy of the Museum of Riverside, Riverside, California.

The Adam’s Track opening represented a high point in Japanese-American relations in Riverside. Some 1,590 people had come to the town from Japan by 1910, and cycling’s rise paralleled the sport’s popularity in Japan, where business owners established sporting goods and repair shops, manufacturers developed Japanese-branded models, and the national army was newly equipped with bicycles.

Likewise, a Japanese-American bicycling culture thrived in Riverside. Recent immigrants, including the Nishida and Yoshida families established bicycle shops soon after arriving to the community. Oral histories suggest these stores serviced not only the community, but also the multiracial populations who lived nearby. As time passed, these bicycle services evolved into motorized services. The Nishida family turned their bicycle shop turned into an automotive shop and the Yoshida family established a motorcycle agency and a garage.

The Riverside Japanese Association planned the inaugural bicycle races at the Adam’s Track as part of a grand gala honoring the birthday of the Meiji emperor, who advanced capitalist industrialization and Japanese expansion across the Pacific. A highlight of the event was an invitation-only celebration at the downtown Loring Opera House, a Romanesque theater specially decorated in Japanese lanterns, flags, and flowers. Local dignitaries made speeches, and the association presented a display of Japanese arts and technology, including daytime fireworks.

As the birthday gala’s formal program concluded, organizers invited participants to head to the newly built Adam’s Track to watch the races: in individual heats of one to eight laps around the three-eighth mile oval track, which was banked on the curves to maximize speed. There were six races in total, ranging from three miles to a mile-and-a-half sprint, which spectators watched from a newly constructed clubhouse and grandstand overlooking the track. Races were restricted to Japanese-American participants, with the exception of a single two-mile race opened to “everybody, Japanese, Americans, Indians and even Russians,” as noted by the local press.

The races were much anticipated. Regional news sources followed the opening of the track closely, detailed the race schedule, and highlighted event sponsors and prizes. The press lauded the energy and high speeds of the bicyclists. The Riverside Daily Press reported before the event: “The Japanese are enthusiastic sportsmen, and particularly enthusiastic bicycle riders, and as they promise a revival of the old sport … Their first race meet will undoubtedly be attended by an interested crowd of spectators.” 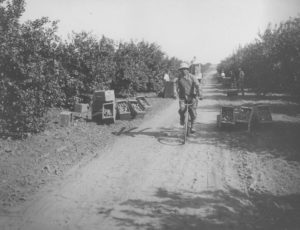 Japanese laborer riding through the groves on his bicycle. Courtesy of the Riverside Public Library, Riverside, California.

Previously, cycling races in Riverside had been held in the Athletic Park downtown, but local leagues of riders with Asian surnames were never present. This reflected a color line set by the League of American Wheelmen (LAW), a membership organization, founded in Rhode Island, which oversaw national bicycle racing regulations. LAW explicitly excluded African-American cyclists beginning in 1893. Racial exclusion also took hold in the Southwest, where bicycling was so thoroughly internalized as a white sport that the exclusion of nonwhite riders did not need to be articulated in formal guidelines. Consider one invitational meet in Riverside around 1897, which drew 88 riders from across the region. Only two registrants had Spanish surnames. None had Asian surnames.

Adam’s Track races were intended as an answer to this exclusion. Judged, officiated, and featuring men from the Japanese-American community, these races showed off these riders’ skill in a forum where they alone determined the grounds of success. The event’s judges included prominent community members like Ulysses Kaneko, a successful business owner and court translator, and—in a rarity for an era that denied U.S. citizenship to Asian immigrants—a naturalized U.S. citizen.

Built four miles away from the downtown Athletic Park, the Adam’s Track was near the Japanese camp of the Arlington Heights Fruit Company, which employed hundreds of recent arrivals to tend citrus plants and pick fruit each year, many eager to race.

Racers arrived at the track with elite U.S. racing bikes, including Pierce Cycles, a beautifully designed line based in New York that sold bicycles at $50 a piece. The cyclists earned awards for their victories, such as a $10 suitcase from Reynolds Department Store for first prize in the three-mile race, a $7 silver watch from Pollock Brothers for first place in the two-and-a half-mile race, and expensive clothing from cycling stores for sprints. In a period when sport was often used to express white racial dominance and national strength, Japanese-American boosters promoted the cyclists’ successes and lauded their athletic ability. 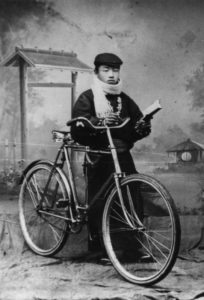 Studio portrait of boy on bicycle. Courtesy of the Los Angeles Public Library.

It is difficult to know if Japanese-American women joined in the craze; they are notably missing from public accounts of cycling activities in Riverside during this era. That is a stark departure from reports of cycling practices in Japan—where bourgeois women commonly rode bicycles in public spaces—and throughout the United States, where women cycled independently and in clubs from the 1890s onward.

For all the potential for cooperation displayed at the Japanese emperor’s birthday gala and Adam Track’s opening race in 1905, the following years saw a distinct backlash against Japanese-American cyclists. And that backlash became part of a more general push for racial exclusion. In the city of Riverside, over half of all arrests of Japanese-Americans over the next decade were for bicycle violations.

An important turning point in cycling enforcement came in 1910, with the passage of a traffic ordinance. In the media coverage leading up to passage of the 20-page local law, public safety and police enforcement against speeding motorists were emphasized. But the ordinance itself placed heavy regulations on common cycling behaviors, including speeding, racing, riding on sidewalks, and cycling at night without a light.

The cycling ordinance also marked a new era of police enforcement and surveillance. Notably, the city equipped its police with motorcycles, “for use in running down traffic violators.” This was a significant early investment, at a time when the largest motorbike manufacturers only produced a few hundred units a year. The ordinance also extended special privileges to officers, such as requiring privately owned vehicles (including bicycles and horse-drawn carts) to surrender the right of way.

Many people still wrongly associate cycling with white middle-class hipsters—perhaps because history has buried the cycling stories of immigrants and nonwhites.

Violation of bicycle ordinances, a misdemeanor, carried heavy fees and penalties. For a first offense, cyclists could be fined up to $100 and imprisoned for up to 30 days. Three or more offenses heightened the penalties to as much as $500 and up to six months’ imprisonment. Although there is nothing in writing that explicitly targeted Japanese-Americans, police and the community clashed with great frequency in everyday enforcement.

Original arrest numbers carefully recorded by sociologist Morrison Wong reveal that Japanese-Americans were cited for cycling infractions at rates as high as 22 percent of their share of the population—a stark figure given that they had relatively lower arrest records in the county. In fact, cycling infractions accounted for 58 percent of all arrests of people with Japanese surnames. When riding bicycles in downtown spaces, where restrictions were starkest, or in multiracial neighborhoods, where a lack of infrastructure created incentives for prohibited practices, Japanese-American men were particularly vulnerable to traffic laws, which required police discretion of subjective acts like speeding.

The cycling ordinances represented just one of many ways Japanese immigrants were policed by forces of the state. Better known examples included the 1907 Gentlemen’s Agreement banning the immigration of Japanese laborers to the United States, and the 1913 California Alien Land Law, which prohibited Asian immigrants from owning land.

Today, more than a century later, many people still wrongly associate cycling with white middle-class hipsters—perhaps because history has buried the cycling stories of immigrants and nonwhites. But if you look hard enough, in places like Riverside, you will find rich stories of bicycling for pleasure, sport, and work—and of riding as an enduring method of resistance for people on the move.

Genevieve Carpio studies U.S. history and spatial theory at UCLA’s César E. Chávez Department of Chicana/o Studies. She is author of Collisions at the Crossroads: How Place and Mobility Make Race.