Fumiko Fukuyama Ide always loved to dance. Being a member of the Tartanettes, a club for Nisei (U.S.-born children of Japanese immigrants) girls in Los Angeles’ Little Tokyo, kept her dance card full in the 1930s. Ide grew up during the Great Depression, sewing her own clothes, darning her socks to make them last longer, and helping out in her father’s Little Tokyo hardware store. She was active in school clubs and edited the Belmont High School newspaper, but much of her socializing took place, as it did for many urban Nisei, within Nisei circles. The Tartanettes were sponsored by the Japanese YWCA and the Union Church, and the name was adapted from the church’s boys’ club. Ide and her friends learned to organize socials with scant resources and became adept at the fox-trot, waltz, and swing. 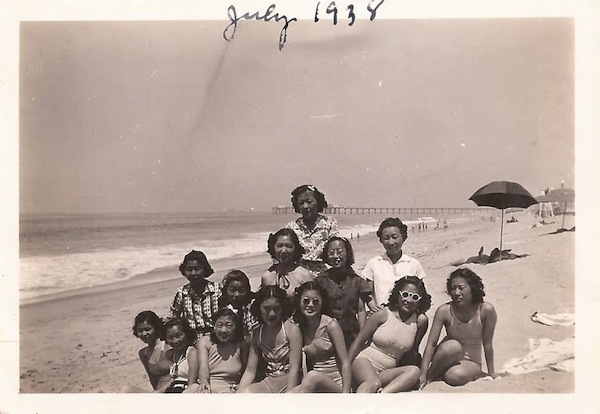 The Tartanettes enjoying a beach outing, probably at the YWCA’s Eliza Cottage at Huntington Beach.

Before, during, and after World War II, Nisei youth clubs offered hundreds of city girls like Ide a place of camaraderie and belonging where they could play basketball and baseball, socialize with boys, develop leadership skills, participate in community service, and forge lifelong friendships. In an era when Japanese-Americans faced racial barriers to social acceptance, these clubs enabled urban teenagers to claim American identity and enjoy the pleasures of popular culture.

The forced removal and incarceration of Japanese immigrants and their children during World War II have understandably overshadowed the history of prewar community life in both academic study and popular media. The loss of family belongings and club records during the war has further buried this past. Partly for these reasons, I had no idea that many urban Nisei teenagers were caught up in a round of parties, dances, and sports in the 1930s.

I first glimpsed this vibrant social world when, after finishing my dissertation about a Japanese-American farming community in the San Joaquin Valley, the Center for Japanese American Studies in San Francisco invited me to give a presentation on rural youth. Nisei men and women who came to hear the talk regaled me afterward with stories of their prewar activities, which I discovered filled the pages of the ethnic newspapers. My Nisei mother grew up on a farm in East Oakland where her family grew pansies and delphiniums for market. When I told her about my research, she said, “I just knew those city kids were having more fun than we were!”

The Nisei clubs provided a haven at a time when Japanese immigrants faced state laws that banned them and other “aliens ineligible for citizenship” from buying land. Japanese immigrants and their children were barred from marrying white people, were limited in where they could live, and were discriminated against when it came to accessing many public facilities. Journalist Katsumi Kunitsugu, whose family lived in East Los Angeles in the 1930s, remembered, “You go into just any old restaurant, and sometimes the waitresses wouldn’t serve you. They just never came around to take your order.” 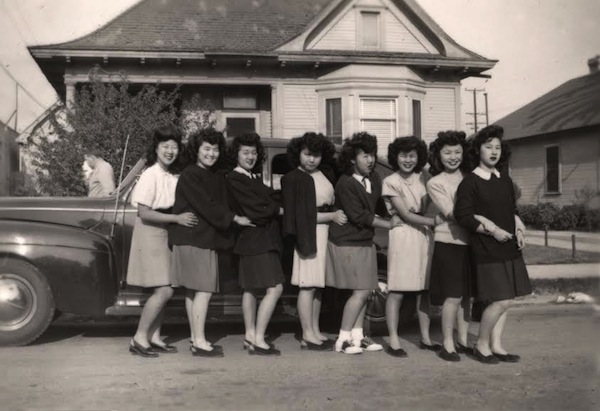 Because they were often excluded from school organizations and extracurricular activities in the 1920s and 1930s, many Nisei turned to their peers for recreation and understanding. Clubs formed quickly along the West Coast in cities stretching from San Diego to Seattle. Los Angeles, with the largest population of Japanese-Americans, had the most extensive networks. By the eve of World War II, 400 clubs flourished in Southern California, many sponsored by Christian churches, Buddhist temples, the YWCA and YMCA, Girl Scouts, and Boy Scouts. Girls’ groups such as the Tartanettes were particularly numerous.

For Japanese immigrant parents and their children, city life made both ethnic culture and mainstream leisure culture more accessible, whether it was seeing the movies of Shirley Temple or Shirley Yamaguchi. However, the emergence of the “Modern Girl,” with her bold flapper fashion and pursuit of romantic love, caused concern among elders in Little Tokyo, as elsewhere around the world in the 1920s and 1930s. Nisei girls felt special pressure—and were watched more closely than their brothers—because young women’s behavior was a marker of family respectability in the ethnic community.

Belonging to a club made it easier for girls to gain their parents’ approval for beach outings and hikes, roller-skating parties, and athletic competition. And, as activist Aiko Herzig-Yoshinaga recalled, there was an added benefit particularly attractive to adolescents: “Having joined a group of other girls in the neighborhood to form a social club, The Junior Misses … gave us girls opportunities (and excuses) to get together with other Nisei boys’ clubs.” Most groups also took part in community service, making Thanksgiving food baskets for the needy or sewing nightgowns for children at the Japanese orphanage.

World War II disrupted every aspect of the Nisei’s daily lives, as they and their parents became identified with the enemy. Herzig-Yoshinaga described a Los Angeles High School principal announcing to her and the other Nisei in their 1942 graduating class that they did not deserve to get their diplomas because “your country bombed Pearl Harbor.” After President Franklin D. Roosevelt signed Executive Order 9066, Herzig-Yoshinaga and her family were among the 120,000 Japanese-Americans—two-thirds of them U.S. citizens by birth—who were moved from their homes on the West Coast and in part of Arizona to confinement in desolate regions.

In the cramped, bleak wartime camps, the Nisei organized club sports and dances to boost morale and relieve boredom. Clubs also offered girls a way to contribute to the war effort. Mary Nakahara, who later became known as the political activist Yuri Kochiyama and became involved with African-American, Puerto Rican, and Asian-American liberation movements after her World War II incarceration, established the Crusaders girls’ club at the Santa Anita Assembly Center. They sent postcards and letters to some 1,300 Japanese-American servicemen. The revival of these youth organizations like the Girl Scouts and Crusaders helped to keep alive a sense of belonging to the outside world.

In 1945, when the war and their exclusion from the West Coast ended, many Japanese-Americans returned to their communities. However, their release from the camps didn’t mean that they were met with a warm homecoming. They still faced housing and job discrimination, vigilante violence, and harassment, compounded by a housing shortage and a swelling labor force. Clubs gave vital support to Nisei youth facing hostility in postwar Southern California, even if they would never be as popular as before the war. The JUGS—which stood for “Just Us Girls” and had begun at the Manzanar War Relocation Center—continued to enjoy sports and dancing after resettlement. The lively Atomettes—sixth graders at the West Los Angeles United Methodist Church—organized trips to museums, Knott’s Berry Farm, and Catalina Island. They also started the church’s choir, Easter breakfast, and annual bazaar.

And besides the fun and lasting friendships, these clubs expanded the horizons of girls like Fumiko Ide and Aiko Herzig-Yoshinaga. As Ide’s fellow Tartanette, sociologist Setsuko Nishi, explained, “Our parents didn’t have connections into the larger community. So that, in a way, the YWCA Tartanettes … meant a linkage into a larger American social world of young women.”

The spirit of the Nisei clubs endures in a number of organizations today, including the flourishing Japanese-American basketball leagues that now include fourth- and fifth-generation girls and boys. Nisei women students who were excluded from Greek letter organizations before and after the war established sororities such as Chi Alpha Delta and Theta Kappa Phi at UCLA and Sigma Phi Omega at USC, which now draw pan-Asian-American women seeking camaraderie and sisterhood. The organizing ability of women such as Herzig-Yoshinaga enabled them to play energetic roles in the movement for redress of the World War II incarceration of Japanese-Americans. Tracing the hidden history of their teenage circles shows how, despite racial barriers, the Nisei found their way onto the dance floor and learned to make a space for themselves in American youth culture. As Fumiko Ide remembered, “We really danced up a storm!”

is a professor of history and Asian-American studies at UCLA and the author of City Girls: The Nisei Social World in Los Angeles, 1920-1950.