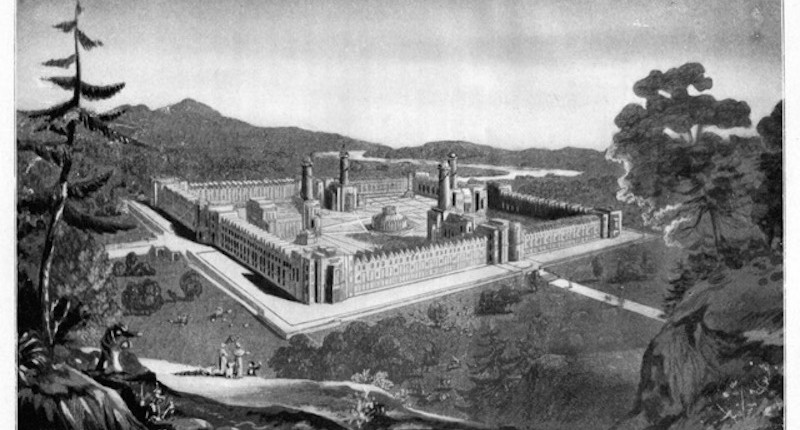 No place on the globe has been more crowded with utopian longing and utopian experimentation than the United States in the middle of the 19th century. Countless people on both sides of the Atlantic believed that a new and wondrous society was about to take form in the American wilderness. It was a time when the imminence of paradise seemed reasonable to reasonable people.

Between the American Revolution and the Civil War, nearly one hundred utopian colonies were founded in the United States. Those efforts to build a radically new type of society reveal an intellectual impulse that has flowed through the American experiment since day one. Mistakenly sensing that the world was on the brink of transformation, the 19th-century utopians built their tiny societies according to a single criterion: their own shining visions of the future.

The model for a New World utopia was first laid down by the Shakers, a small sect named for their physically raucous method of worship. Their vision of a society dedicated to radical equality and intense collectivism was born in the fever dream of religious revelation and the waking nightmare of early British industrialization. Led by the prophet Ann Lee, a small community of Shakers departed the grim mills and slums of Manchester, England, for the colonies, settling in upstate New York during the Revolutionary War. They believed that the Second Coming had already happened and that it was up to them to build the perfect earthly society: an austere, whitewashed stronghold for the dawning Millennium. To construct their utopia—a federation of tidy, communistic villages—the Shakers invented a new society from scratch, scorning the most fundamental building blocks of western civilization. In Zion there would be no property, no family, no sex. Women and men would be equal. Labor would be worship. And the individual would dissolve entirely into the collective. By the 1820s, the Shakers had established prosperous villages throughout most of the settled regions of the United States.

Inspired by their success, secular utopians took up the idea that small, planned communities might be the ideal mechanism by which to remake the entire world. In 1824, the Welsh socialist and textile magnate Robert Owen came to the village of New Harmony on the Indiana frontier to build a rationalist, communist utopia that he called the New Moral World. Owen, a close observer of the Shakers, planned to raise a “parallelogram,” a palatial building in which thousands of people of every class could live and work in peace, abundance, and total equality. At New Harmony and a dozen smaller communities, the Owenites hoped to prove that property and religion were all that stood between humanity and a glorious future in a man-made paradise.

Owen’s experiment in Indiana unraveled by the late 1820s, but a decade later, with the nation mired in its first major depression, a New Yorker named Albert Brisbane began publicizing the doctrines of the French social theorist Charles Fourier. Fourier claimed that the right kind of social institutions could unleash the powerful forces of human passion and usher humanity toward an orgiastic global utopia that he called Harmony. To hasten mankind’s ascent into Harmony, Fourier proposed building enormous complexes called “phalansteries” in which groups of precisely 1,620 people would live and work. Once the era of Harmony commenced, Fourier prophesied, every human impulse, even the most taboo sexual predilection, would be satisfied and rendered productive. Abundance would prevail; mosquitoes would go extinct; and the oceans, tinctured by “boreal fluid” from the melting Arctic icecap, would taste like lemonade.

These ideas, broadcast daily on the front page of the New-York Tribune, the country’s bestselling newspaper, spread fast. (Horace Greeley, the Tribune’s editor and an early supporter of American Fourierism, was one of the most well known men in the country.) By the end of the 1840s, 29 Fourierist “phalanxes” had been founded in the United States. Most were half-cocked, underfunded ventures that folded quickly. Others faired better. The longest-lived was the North American Phalanx in New Jersey. The most famous was the Brook Farm Phalanx, just outside of Boston.

While the Shakers, Owenites, and Fourierists all had intellectual roots in Europe, the most remarkable and, by many measures, the most successful utopian venture in American history was entirely homegrown. New York’s Oneida Community thrived for three decades under the brilliant and mostly benign autocracy of John Humphrey Noyes, a Dartmouth- and Yale-educated prophet of Christian communism. Underwritten by several highly successful manufacturing enterprises, the so-called Perfectionists lived a comfortable, intellectually rich life in a sprawling brick mansion in western New York. To avoid the pitfalls of their forbears, the Perfectionists studied the strengths and follies of the Shakers, Owenites, Fourierists, and others. They championed gender equality, a unique method of group therapy, a form of birth control they called “male continence,” and a practice they called “complex marriage,” a carefully regulated system by which almost any woman in the community could have sex with almost any man.

Despite their divergent views on sex, pleasure, and religion, these five groups shared a basic constellation of (then) radical values that put them at odds with the prevailing values of Jacksonian America. They all believed that men and women are more or less equal, that financial competition is morally corrosive, that the nuclear family is an obsolete institution, and that material equality is a precondition of democracy.

Utopianism may be a species of optimism, but it is always born of discontent. Every utopia, whether it remains on the page or takes shape in brick and mortar, reveals the anxieties and disappointments of its author(s). The plow-broken serf places his utopia on the rock-candy mountain, where the rivers run with beer. The harried, well-fed urbanite puts her utopia in an arcadia of primitive farm work. The 19th-century utopians shared a common anxiety about the rising specter of industrial capitalism, a then-novel system that seemed, to them, to lay waste to everything in its path while offering as its sole compensation cheap goods and a few private fortunes. Rather than blaming technology itself, the utopians sought to hitch the remarkable new engines of mass production to a higher purpose. They could not believe that something as unsavory—for many of them, as irreligious—as competition would be the foundation of modern society.

Today, when these small societies warrant mention it is usually to underscore the extravagant “enthusiasms” of the middle 19th century. The utopians are remembered as little more than the crazy froth at the crest of a general wave of Jacksonian optimism. The sheer scale and folly of their expectations —the wrongheadedness of Owen’s geometric paradise or Fourier’s lemonade sea—are indeed baffling. We occupy the future about which they dreamed and we can plainly see that it looks nothing like their imaginings. Yet the tens of thousands of Americans who lived in these communities were not fools and lunatics. To be sure, in an era crowded with cranks and faddists, the utopias sheltered more than their share. But the majority of the tens of thousands of men and women who lived within these communities were intelligent, hard-working people. They came from every denomination and every social class. They were blacksmiths and farmers, journalists and lawyers, tailors and scientists, teachers and clergymen. A few of them were amongst the most articulate and prescient reformers of their era.

While the utopians were at odds with the dominant values of the day, their dream of building a new and perfected society in the North American wilderness echoed the keenest hopes of the American Revolution. “We have it in our power to begin the world over again,” wrote Thomas Paine in 1776. “A situation, similar to the present, hath not happened since the days of Noah until now.”

When these small societies failed, it was mostly because their citizens ceased to believe that paradise was waiting for them just around the corner. As long as they believed that their dream might be realized, they labored with heroic energy, gladly bearing immense hardships. At their best, they labored with an inspiring sense of solidarity, working, as one of them wrote, “as one man, afire with dedication and enthusiasm.” When the utopian faith slipped, the wind spilled from their sails.

is a writer living in Lagunitas, California. His book Paradise Now: The Story of American Utopianism was recently published by Random House.

*Photo courtesy of Library of Congress Prints and Photographs Division.