More than 40 years after the Civil War ended, machinist George Q. Whitney, formerly a private in the 16th Connecticut Volunteer Infantry, helped to dedicate a monument to his state’s prisoners of war. The statue, nicknamed “Andersonville Boy,” was a duplicate; the original had been erected at the site of the former Confederate prison in Andersonville, Georgia in October 1907. Whitney told a crowd assembled in Hartford that, “many of you know nothing of the Men whom I represent, so it seems to be the proper time and place to speak of them,” before assuring his listeners that they should not feel “ashamed” for helping to “honor those who honored their country in its peril.”

It was an unusual thing to say at such a moment—but then again, the story of the 16th Regiment is unusual, too. Today, as when Whitney gave his speech in Hartford, most Americans know nothing about the unit, but its history shows the difficulty of reconciling the real, often mundane and unheroic aspects of the Civil War with the more celebratory and jingoistic narrative that still lingers in today’s popular imagination.

In front of the monument that day in 1907, Whitney gave a quick overview of the story: the weeks-old Union regiment received a baptism by fire at the battle of Antietam, got captured at Plymouth, North Carolina, and suffered a long incarceration in Andersonville Prison. “Like all troops,” he stated, “we did the best we could, learning as fast as possible, and were soon in shape to stand up with the best.” Whitney glossed over some significant details, including the unit’s breakdown at Antietam, its members’ threats of mutiny, the fact that some pledged to the Confederate side, and the bitter humiliation of capture. He did, however, quote from a colonel’s closing words to the regiment on their mustering out in June 1865: “Although a less amount of glory in the field has fallen to our lot than to many others, no regiment from the state has been subjected to so much suffering.”

The speech was a single salvo in a decades-long campaign—led by Whitney and two of his friends in the unit—to ensure that the memory of the 16th Connecticut endured, and that it was something for which no one would be ashamed. Making public addresses and building monuments, the men sometimes disagreed about the story they were telling, unsure how to acknowledge the regiment’s struggles and still align their accounts with a triumphant story of saving the Union. Whitney, then a 19-year-old machinist from Hartford; Robert H. Kellogg, 18 and training to be a druggist; and 19-year-old Ira E. Forbes, a farm laborer saving money for college, met as fresh-faced volunteers in the summer of 1862, when men were still willingly flocking to fight for the Union, even though the terrible war had begun to take its toll. They would become lifelong friends, and the Civil War would remain the most important experience of their lives.

The 16th Connecticut participated in only one major engagement of the war—the battle of Antietam on September 17, 1862—but that battle, which was the single bloodiest day in the war, shattered the unit. It had been just three weeks since the men had mustered into service, yet they found themselves rushed to the front as part of George McClellan’s Army of the Potomac’s efforts to halt Robert E. Lee’s invasion of Maryland. After a day of carnage and confusion, the Confederates withdrew, but it was in many ways a pyrrhic victory for the Union. For the 16th Connecticut, Antietam was a debacle: Called into action late in the fight, its members were woefully untrained in how to fire their rifles, let alone ready to understand orders barked in the chaos of battle. More than a quarter of the men were wounded, and many others broke and ran from the field.

The unit never recovered its strength or reputation. For more than a year, they moved from place to place, doing mostly monotonous garrison duty, making the men in the ranks feel like, as one member described, “a wondering body of nomads.” By January 1864, they were stationed in Plymouth, North Carolina, a place that struck them as the edge of the world. “It’s a kind of barbarian place, here,” one soldier wrote his brother, “about 9 miles from nowhere, as the boys say.” On April 20, after a three-day siege, Confederates captured the entire regiment, some 400 men. Kellogg recorded in his diary that day that “we threw up the white rag and gave up to them.” 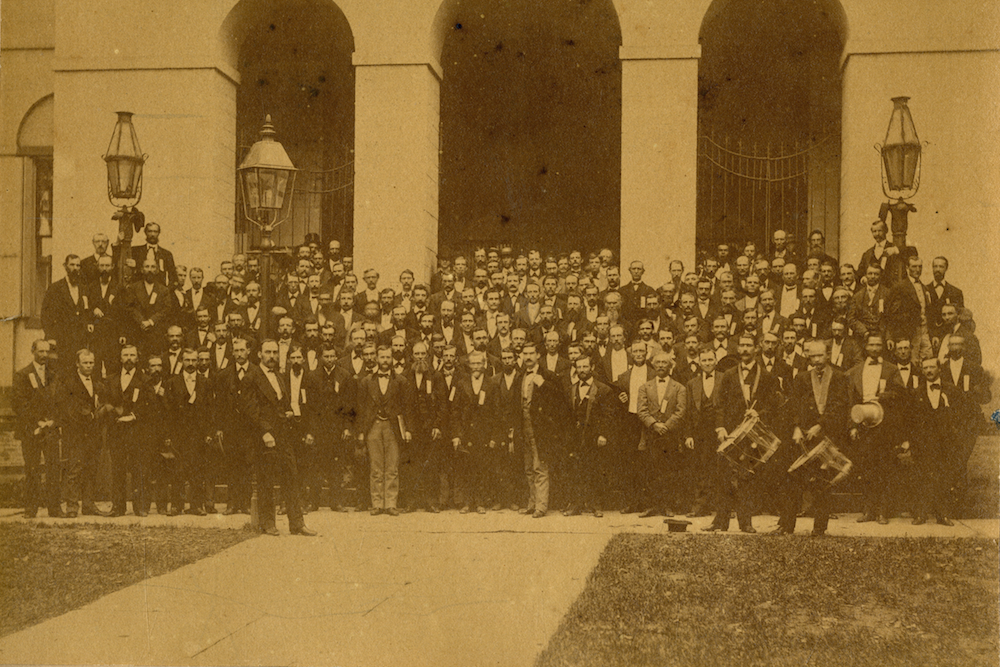 Gave up, indeed. The 16th Connecticut soon went to the notorious Andersonville prison in Georgia. First opened in February 1864, by May it housed more than 12,000 prisoners, crammed into an open-air stockade. Men died at alarmingly high rates due to malnutrition, disease and exposure—29 percent of the prisoners overall, and about a quarter of the men of the 16th Connecticut. Conditions were so miserable that some members of the 16th took an oath of allegiance to the Confederacy to gain relief from their grueling captivity. Forbes reflected in his prison diary: “It would be the source of unspeakable happiness to me to return to our army and again fight beneath our glorious banner.” Kellogg later wrote that he and his comrades did not wish to be “free from all participation in strife”; instead they preferred the “sulphurous smoke of the cannon, in the fiercely contested battle, for there,” Kellogg explained, “at least would be glorious action.”

Kellogg, Whitney, and Forbes returned home in 1865, but they were changed men, scarred by their memories. Kellogg tried to resume his career path as a druggist, but found himself disconnected and isolated. When a local deacon died, he wrote in his diary that he felt numb: “Death seems to have lost its solemnity in me since ‘Andersonville.’” Forbes returned to college, graduating from Yale in 1870; but rather than studying theology as planned, he became a journalist, reporting for the Springfield Union, the Hartford Evening Post, and The New York Times. George Whitney resettled in Hartford and began working as a contractor for his family’s machinist firm, Pratt and Whitney.

Whitney decided to create a biographical record of every single member of the 16th Connecticut—laborious work, in which Forbes, who by the turn of the century had authored numerous stories about the Civil War, and Kellogg assisted him. Nearly every single member has at least one sheet in the collection devoted to him. Some pages have only a soldier’s name and nothing more. Others provide long handwritten narrative descriptions of a particular soldier’s experiences, recounting wartime exploits and anecdotes. In addition to preserving these records, Whitney also attended funerals, aided comrades with pension applications, and visited veterans and their families. At one point he told another former member of the unit, “[t]he main thing to me is that they should be satisfied and pleased with what they know is done.”

Robert Kellogg, meanwhile, moved to Ohio, where he worked as an insurance agent. He stayed in close contact with both Whitney and Forbes, offering his own memories of individual soldiers for Whitney’s project, but also spinning his own version of the regiment’s record, focusing on the hardships the men faced at Andersonville. In March 1865, he published Life and Death in Rebel Prisons, an account dedicated to the families of POWs and the “thousands of brave men” who had “gone down to their untimely graves through unparalleled sufferings.” The book bitterly laid blame on Confederate authorities; Kellogg also testified at the trial of Henry Wirz, the infamous commandant of Andersonville. In his accounts, Kellogg emphasized the sacrifice and stoic valor of the unit, seldom speaking of the despair that led some comrades to take oaths of loyalty to the Confederacy. In Life and Death in Rebel Prisons, he denounced these men as cowards, but in his later published writings he was silent about them.

Ira Forbes, too, sought ways to promote positive stories about the unit. His initial account of captivity, written months after his release, is remarkably free of bitterness: “I do not,” he told his readers, “desire revenge.” Forty years later, he completed a lengthy history of Andersonville, anxious to have it available in time for the monument dedication of “Andersonville Boy” at the site of the former prison.

Survivors of the 16th Connecticut did other things, too, to preserve and perpetuate the memory of the unit: dedicating monuments at Antietam, Andersonville, and Hartford; attending reunions; marching in parades; and making public speeches. They collected scraps of their regimental flags, which they had hidden and saved from their capture at Plymouth, and had them sewn into a new flag designed by Tiffany & Co., a tangible emblem of their efforts to never forget. But there were always cracks in the narrative: Different soldiers told different stories, with some more willing than others to admit the unit’s failures and foibles. The strands of the story they were trying to create never really came together.

Forbes, in particular, could sound like a Southern apologist, refusing to blame Confederates for the horrors of Andersonville and refuting charges that Confederates wantonly murdered surrendered African American troops at the battle of Plymouth. Kellogg supported his old friend, writing, “You are doing grand good work in a thorough and careful way, and it makes interesting reading.” Whitney, however, was more critical. “I believe,” he maintained, “in putting things as they were, not as you wish they had been.” Forbes did not accompany his fellow veterans to Georgia when the Andersonville monument was dedicated.

The men kept working diligently on these memorials, but their recollections gradually receded in relevance and clarity. By 1907, Kellogg wrote a note to Whitney on the back of a business card: “Were we really ever in Andersonville?” Four years later, Forbes was committed to an insane asylum; Whitney was one of two comrades who signed the commitment papers. Whitney remained indefatigable, devoting years to his biographies, but his records mainly preserve the minutiae of forgotten men. In 1925, soon after his death, Whitney’s family donated this massive collection of notes and handwritten sketches to the Connecticut State Library, where it resides today.

The Civil War service record of the 16th Connecticut was marked by failure in its only full-fledged battle and a long, dehumanizing imprisonment, and it conflicted with conventional narratives of martial heroism. George Whitney, Robert Kellogg, and Ira Forbes were determined to recount their military service, to record and preserve it, and to ensure that no one would ever be ashamed of it. The great irony is that despite their earnest determination to never forget, few Americans know anything about them at all.

Lesley J. Gordon is the Charles G. Summersell Chair of Southern History at the University of Alabama. She is the author of A Broken Regiment: The 16th Connecticut’s Civil War.