“Do you have the kind of bullet that killed Lincoln?” asked a tourist buying a Derringer pistol, wearing a God Bless America t-shirt. I looked up from the counter a bit confused. I’d come in late after watching Steven Spielberg and Doris Kearns Goodwin speak at Gettysburg’s Soldiers’ National Cemetery for the 149th Remembrance Day, the anniversary of Abraham Lincoln’s address. I was cold and my coffee had only begun to wake me up.

“It should be the size of any pistol bullet,” I said. “I’ll look up the caliber on my phone and see if we can find one that matches.” It was a strange request, but it didn’t faze me the way it would have years earlier. I had been working in my family’s store, The Horse Soldier, for a little over six full months after graduating college in 2012. I had promised my grandmother, who still worked at our front counter every day possible until retiring this year, that I would stay at our relic and antique store through the summer of 2013. We were preparing for the deluge of tourists that would be drawn by the 150th commemoration of America’s bloodiest battle; this was no time to be squeamish.

I picked up a U.S. Minié ball from hundreds of bullets stashed in front of our counter and wondered whether my grandfather knew what he was signing us up for when he found his first one. 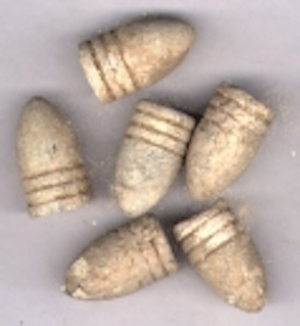 Union .58 caliber Minié Ball bullets, which would have been shot out of a Civil War rifle

My family’s business started as my grandfather’s hobby. Chester “Chet” Small, a U.S. Marine, came home to Gettysburg after he and his brothers had served in World War II. While trying to move on from the war he fought in overseas, he kept finding relics and bullets from another war in his backyard, as he and his brothers had in their childhood, over the road from Pickett’s Charge. The harvest of such deadly memorabilia was tragically bountiful.

My dad, Maurice, is named after one of his uncles, the one killed in action in France and buried in the Soldiers’ National Cemetery. Most shop customers call him Sam. My aunts tell me my uncle Wes couldn’t pronounce his name when they were little so that’s what everyone calls him. My grandfather started trading the bullets and relics he had found with his old military friends. Sometimes he’d sell dad and Wes bullets for a penny so they could sell them for a nickel to earn money for ice cream at the stand past Devil’s Den.

At some point, my grandmother Patricia put her foot down, insisting that these strange bearded men stop bringing big rifles into her living room. So Sam, Wes, and Chet built a shed out near the side of the Emmitsburg Road in 1972 and hung up a sign that read “Civil War Relics.” 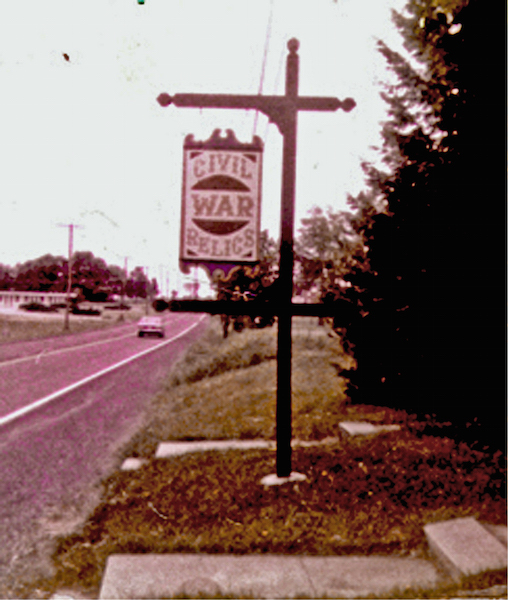 My dad and his brother went off to college and returned home in the 1980s. Unsatisfied with other jobs, they began to build the business and moved the operation into town. The park—like many famous Civil War battlefields, Gettysburg is part of the National Park Service—purchased my grandparents’ battlefield property and tore down their wooden house to restore the land to its state in 1863. Too bad they tore down the house: information later revealed that the house was a witness to the battle after all. It had just moved from its original foundation across the road, transported by horses pulling logs.

Piecing together a network of collectors, relic hunters, and researchers, my family would encounter an endless stream of Americana’s holy grails. By attending trade shows with vendors, growing up with families that ran Gettysburg’s museums, and distributing a catalog worldwide twice a year for nearly 20 years, my family built a reputation for the honest art of appraising Civil War authenticity. We’ve handled some impressive artifacts over the years: Ulysses Grant’s coat, a set of the Lincoln White House chinaware, signal flags from Little Round Top, a pike from John Brown’s raid, fabric from Jefferson Davis’ chair, Frederick Douglass’ signature.

Most recently, we handled the belongings of General John Fulton Reynolds. Reynolds was shot on the first day of the Battle of Gettysburg in McPherson’s Woods and died in the building next door to our store’s current location. His descendants, the Scotts, had passed down the items generation to generation. The family relinquished some of the artifacts—the kepi, belt, sword, corps badge he wore on July 1, 1863—to the National Park Service. A photo of Reynolds ended up in the National Portrait Gallery, and some daguerreotypes and presidential commissions promoting him remain in our store; a commission signed by Lincoln will go for $35,000 to the right buyer someday.

To most Horse Soldier customers, that overpriced stuff is for eggheads. Why pay five figures for a piece of paper when you can buy an 1861 Springfield musket, original Colt pistols, cartridge boxes, an Ames Cavalry sabre, daguerreotypes, a Sharps carbine, artillery shells, a tourniquet, bayonets, a canteen for a lot less? Most collectors aren’t about the big names; they’re about connecting with the historical moment. Civil War fandom is very democratic that way.

Customer nostalgia—if you can be nostalgic for a past you didn’t experience first-hand – is triggered by all sorts of associations. Many come searching for a relative’s possessions or just an emblematic piece of state pride. A lot of our customers are veterans, communing with the artifacts (and sacrifices) of their predecessors.

The word nostalgia is a compound marrying the Greek words nostos (“homecoming”) and algos meaning “pain, ache.” Along with the other quack solutions you read about in Civil War medical texts, doctors believed that the homesickness variety of nostalgia could be cured by exercise and battle or would issue discharges and furloughs to treat more severe cases at home. Musicians, meanwhile, indulged the sentiment, pumping out songs about longing for home—from the hurrahs of “When Johnny Comes Marching Home” to the forlorn ballad of “Lorena.”

The Civil War is a big draw for the nostalgic set longing for a time of purpose and moral clarity. And battle re-enactments offer adults a rare, if not last, chance to dress up and pretend. The combination of solemn respect and child-like play seems as contradictory as the Blue and the Grey.

The Horse Soldier provided the backdrop to my childhood. It’s where I best remember my grandparents. And everyone remembers the tree that grew right inside the front of the shop where Grandma used to feed acorns to squirrels. Around the corner you would find my grandfather, whom I knew only as Pop-Pop, rooted firmly on a green vinyl Steelcase chair next to the saloon doors and a row of rifles. Eventually, the tree was torn down, replaced with a panoply of cannons and Gatling guns aimed at anyone who dared to enter.

My grandfather passed away five years ago. As his health declined, some of my relatives, high school friends, numerous Horse Soldier employees, and I boxed up every last item to move down the street to our new location. It was a strange exercise, tearing down something that seemed so permanent, accounting for every piece before I went back to my sophomore year of college.

That winter, I was deeply moved by an old poem entitled “My Childhood Home I See Again,” about the bittersweet mixture of remembrance and loss felt in returning home. Its author, Abraham Lincoln, submitted the poem to Illinois Whig in 1847:

O Memory! thou midway world
‘Twixt earth and paradise,
Where things decayed and loved ones lost
In dreamy shadows rise …

Lincoln’s poem goes on to describe the feeling of returning home “after 20 years have passed away,” and his sentiments rang true with me only after a couple of years removed from Gettysburg. We often take the places that nurture us into the world for granted. Having grown up surrounded by battlefields, I used to dismiss the reverence people displayed for this American shrine.

After my grandfather’s passing, I began to read Civil War history to coincide with the epochal 150th anniversaries being commemorated. I read Carl Sandburg’s tomes about a home-spun, rail-splitting dark-horse Republican candidate from the frontier that won the presidency that fall, assembled a “team of rivals” halfway during my junior year winter break, and was sworn in just a couple days before my 21st birthday in March. As I geared up for finals in April, South Carolina fired shots at Fort Sumter.

As I returned to Gettysburg in 2012, I knew the buildup to the battle would be long, so I made a daily habit to check the period newspapers—The New York Herald, The New York Times, Harper’s Weekly, Leslie’s Illustrated— in “real-time.” I also went on a serious history-reading bender, taking on a challenge from Horse Soldier employee, John Peterson, who offered a Bob Dylan poster as bait. Before I read James McPherson’s Battle Cry of Freedom, “Lincoln freed the slaves” was a platitude. Before I read Stephen Sears’ Gettysburg, the battlefield was a nice place for a picnic, not a three-day ordeal through the crucible of hell that took place during one July’s opening days. 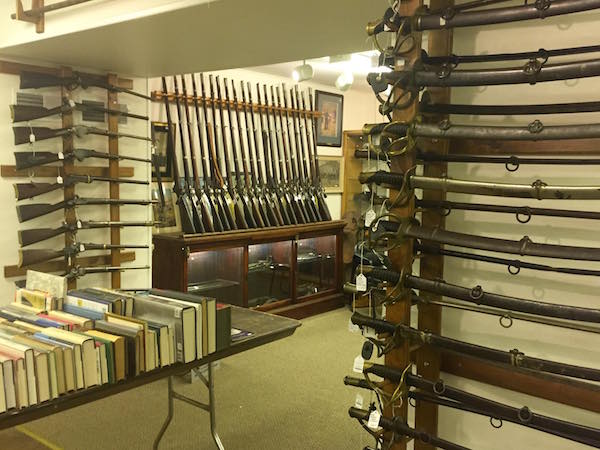 After you actually learn the true history, rather than the ghost story, you can’t escape the grasp of shared humanity. I gained a greater appreciation of what it means to preserve history. Touring where I had spent my childhood, a Horse Soldier regular, Jerry Bennett, breathed life into the past, pointing out buildings and recounting diary stories from housewives describing my hometown under siege.

So much has changed since Lincoln transformed the war from an inexplicable horror into a global struggle for honor in his dedication of these fields. While many Americans have some personal connection to the Civil War, I’m struck by how many people from outside the country are drawn to where Lincoln declared our country would have a “new birth of freedom.” Lincoln was a wise man ahead of his time, but I am not sure he could have imagined little kids far into the future dressed like him with stovepipe hats and beards.

As for me, I am still pitching in at the store then and now, while pursuing a career in DC. But I am pretty sure I will be behind the counter in July of 2063, helping to commemorate the big bicentennial.

is a journalist living in Washington, D.C.