Iowa Lottery CEO Terry Rich presents a check to Lerynne West, one of the winners of a $700 million Powerball prize in November 2018. Courtesy of AP Photo/Charlie Neibargall.

Today legal gambling in the United States is widely accepted and more prevalent than ever. But as recently as the 1950s, gambling was seen as a fundamentally un-American way to make a living. This shift in attitudes towards gambling—which took about a half-century to achieve—spoke to generational shifts in American beliefs about morality and capitalism.

While Americans have always loved to gamble, the 19th century saw a strong pushback against the lottery promoters and bookmakers who had made gambling possible. The public turn against these gambling professionals was not without reason—the lotteries of the day were notorious for fraud, and bookmakers actively fixed horse races. By the second decade of the 20th century, states had banned all gambling, save for two—Maryland and Kentucky—which continued to permit betting on horse races.

And the blatant corruption of tracks and bookmakers turned people against horse racing. You needed bookmakers—the professionals who set the odds on races—to be able to bet on horses. Bettors could choose a near sure thing for a small payout, or try their luck with a long shot. But bookmakers could lose a great deal of money if too many people bet on a long shot that won, so they had a vested interest in the outcome. They often fixed races to keep from losing their shirts. 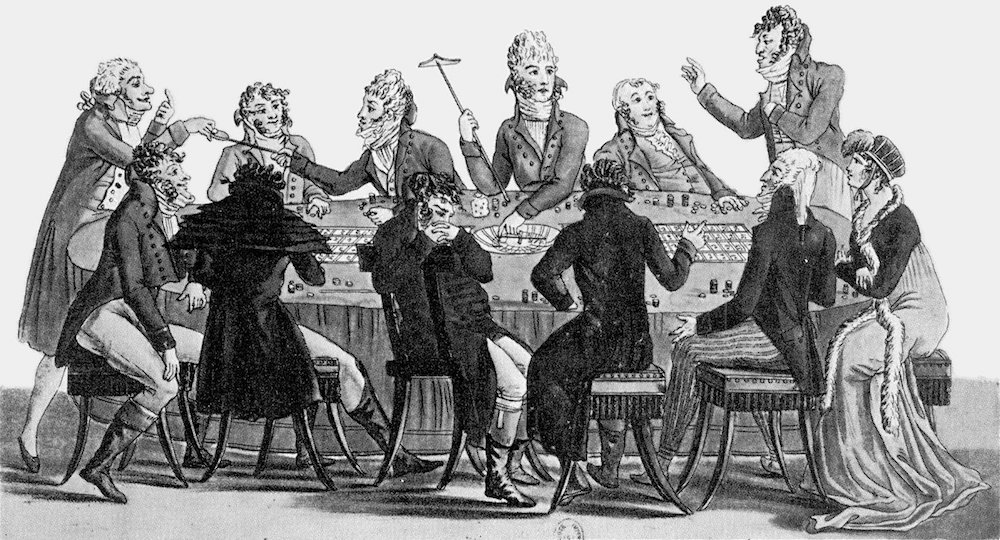 This illustration is a common 19th century caricature of gambling, showing men and a woman at a roulette table. It reflected widespread American distaste for gambling at the time. Courtesy of Wikimedia Commons.

Legal gambling first rebounded because of Americans’ faith in technology and organization. In the 1920s, the invention of the totalizator—an automated system for betting displayed on tote boards—allowed those who took bets to figure out payouts in a way that returned the bulk of money bet back to patrons, with a small, set percentage going to operators and the government. It was all done by machine, and with the track getting a fixed percentage of the betting pool, it didn’t matter who won or lost—the track’s take was the same either way. With no apparent incentive for tracks and bookmakers to cheat, the public embraced pari-mutuel wagering, leading to a Depression-era comeback for horse racing.

The game of bingo, while requiring no technological innovation, also became popular during those same years because of who sponsored it: charitable and religious organizations. Surely, if your church or local fraternal hall was giving you a chance to risk a few dollars for the chance to make many more, there couldn’t be anything too bad about it.

Still, the seduction of easy money couldn’t always be satisfied by legal channels, and by the middle of the 20th century, a vast network of illegal gambling—from numbers games (illegal lotteries) in the inner cities, to slot machines in corner stores, to race-betting rooms linked by telegraph—had grown.

On the surface, none of these practices seemed like a big deal. After all, what difference did a two-dollar bet make in the grand scheme of things? But authorities saw a danger—not in the bets, but in the people who collected them. The illegal business of gambling was dominated by former bootleggers, particularly a cohort of ambitious, young first- and second-generation Americans who came to maturity in the early years of prohibition. Predominantly Italian and Jewish (with a sprinkling of Irish and native-born Anglo-Saxon Protestants), this group unashamedly offered America the gambling it wanted.

Even before prohibition, violence between rival gambling providers had occasionally flared. And, long after the last Chicago rum shipment was hijacked, gambling operators continued to settle their issues with bombs and bullets. In the mid-1940s, a deadly national feud over control of the race wire, the international telegraph that connected race tracks with betting parlors, spilled into the streets. In 1950, the U.S. Senate’s Special Committee to Investigate Organized Crime in Interstate Commerce (informally known as the Kefauver Committee after its flamboyant, coonskin hat-wearing chairman, Estes Kefauver) made gambling, for the first time, a national issue.

When Kefauver started his crime investigation, the presumption was that organized crime was fundamentally un-American and that gambling, which represented the lifeblood of organized crime, was being foisted upon unwitting Americans. Kefauver seemed to believe that, if you arrested enough bookies and numbers bankers, Americans would give up gambling. He and other committee members fulminated against former bootleggers who had become “boss gamblers” who did nothing for society. 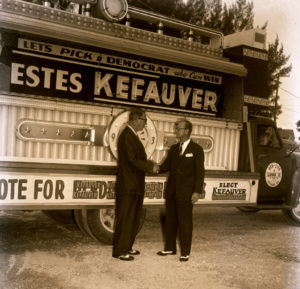 “You don’t contribute a thing in the way of production that makes real wealth,” Senator Charles Tobey of New Hampshire scolded Flamingo casino manager Moe Sedway during the committee’s hearings in Las Vegas. “If you put the same talent you have got toward constructive things in life, producing something that makes real wealth and human happiness, men would arise and call you blessed.”

Tobey may have been willfully blind to the demand side of the supply and demand curve for illegal gambling, but others were not. Apocryphally, onetime bootlegger and future casino owner Moe Dalitz told Kefauver himself, “If you hadn’t have drunk it, I wouldn’t have bootlegged it.” And that was the problem.

Yes, the Kefauver Committee focused the eyes of the nation on its gambling problem, with its televised hearings becoming a national phenomenon. The public watched, rapt, as mobsters and gamblers ducked, weaved, and evaded the committee’s questions. And in the early 1960s, as attorney general Robert Kennedy would try and fail to smash the mob using the Federal Wire Act, a law that criminalized the interstate transmission of gambling information, Americans kept on gambling.

Gambling became not a public evil to be eliminated, but a public good to be tolerated, even encouraged. New Hampshire went first; in 1964, it legalized the lottery to stave off having to levy an income tax. Other Northeastern states quickly followed suit. After all, what politician wants to raise taxes?

Such lotteries were first conducted soberly, without advertising, in an effort to meet an “unstimulated demand.” But within a decade, lotteries offered daily number games specifically tailored to displace the illegal numbers. Before long, lottery commissions were frenetically marketing themselves to citizens, telling them that all it took was “a dollar and a dream.”

Meanwhile, casinos in Las Vegas became so successful that they served as a boon to the state budget while providing enough jobs to create a thriving desert metropolis. Once the state of Nevada amended its gaming laws to allow publicly traded companies to own casinos, the writing was on the wall: That cohort of once young and ambitious bootleggers, now dead or retired, would be replaced by corporations as the national providers of gambling.

As America the productive heartland was replaced with America the consumer heaven, it didn’t matter so much how you made your money—only that you had it to spend.

With government and Wall Street giving lotteries and casinos their blessing, and with gambling proceeds funding education and other public goods, most Americans accepted gambling as a business like any other. By the time the government and mainstream finance took over the business of gambling from the likes of Dalitz and Sedway (and Frank Costello and Nick Civella), the immigrant subcultures from which bootlegger bookmakers had emerged in the 1920s had become thoroughly American. Gambling also became accepted because it was perceived as an equalizer. What is gambling, if not a recourse for economic justice denied? You might not have the wealth you think you deserve, and can’t see a way of getting it, no matter how hard you work. A visit to the casino, the purchase of that lottery ticket, gives hope that you can take a shortcut to the economic “justice” that seems unattainable.

Kefauver and his allies had considered the possibility that Americans might choose to legalize gambling as a way of containing an irrepressible vice. This prospect horrified them. Gamblers weren’t criminals just because their business was illegal. In Kefauver’s mind, they were inherently, irredeemably un-American, and letting them pay taxes and breathe as easy as any other businessmen would have been heresy.

Yet within a generation of Kefauver’s investigation, these descendants of immigrants were not so threatening. After The Godfather, they were romanticized and even admired as American success stories. There’s a reason that the first spoken line of Mario Puzo’s and Francis Ford Coppola’s mob epic The Godfather is “I believe in America.”

As America the productive heartland was replaced with America the consumer heaven, it didn’t matter so much how you made your money—only that you had it to spend.

In other words: If the essence of America isn’t making things but buying them, does it matter if what you sell isn’t a thing at all, but just a chance to win more money?

So not only are the grandchildren of the bootlegging generation as American as anyone else, their much-maligned second illicit good, gambling, is now just as legitimate as anything we can buy—or sell.

David G. Schwartz is a historian and associate vice provost for faculty affairs at the University of Nevada, Las Vegas. He is the author of several books, including Roll the Bones: The History of Gambling and Grandissimo: The First Emperor of Las Vegas.