For the past eight years I’ve been living with 72 people. These 28 men, 25 women, 12 girls, and seven boys are long dead—they were Africans sold into captivity and shipped to America in the mid-1700s. It’s generally accepted that a factual account of their experience—like almost all Africans enslaved in America—is beyond recovery. Even Roots blended fact and fiction into something its author referred to as “faction.”

But thanks to laborious archival research and the linking of two rare and important documents, I’ve been able to shed new light on where these Africans came from and provide illuminating details about their capture and their lives in bondage. This account adds pieces to a story that is still imperfect, but—crucially—more human.

In 2008 I began tracing those 72 people—one cohort of captives—from a single slave ship in Sierra Leone to the plantations of South Carolina. At the heart of the study were two documents. The first was a tally of the captives “purchased” in 1754 by the captain of the Rhode Island sloop Hare traversing Africa’s Upper Guinea Coast from 24 different slave dealers, whose names were included in the document. The second was a list of white South Carolinians who took ownership of 55 of the captives. 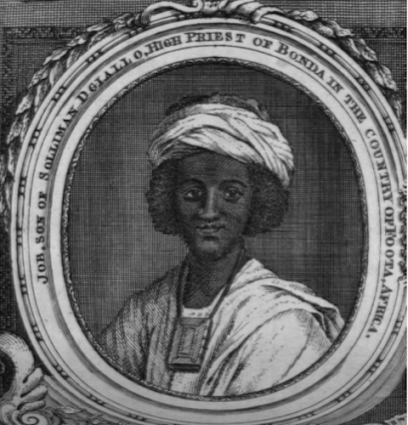 Ayuba Suleiman Diallo was seized on the Gambia River and taken to Maryland in the 1730s.

The shortcomings of these lists reflect the times. The slave dealers in Africa and the white Southerners are all listed by name. The slaves are listed by category: number, gender, and age. And so, even though these 72 people have been my constant companions for eight years, I don’t know the names they carried with them from Africa to America. Still, by linking these two documents and by tracking the Hare captives from Africa to specific plantations in South Carolina, we get a closer look at the inner workings of the slave trade and also at how these Africans, mostly speakers of the interior Mande languages, with some speakers of coastal Atlantic languages, came together to cope with their circumstances in colonial America. Indeed, there is much to be gained from the simple act of recognizing that these enslaved West Africans were not a randomly selected crowd, but rather a coherent group of people with a common background on which to draw as their labors built the foundation of the colonial economy.

The experience of being taken at the same time and from the same general region in Africa did create a bond. I was able to document ways in which these slaves, both on plantations and in cities, tended to live among people of similar Mande background. Those who wound up in Charleston found themselves in the largest community of African-born people in North America. The number of Mande speakers probably approached 1,000. Those who wound up in rural areas also found themselves among “countrymen.” In one rice-planting neighborhood, I was able to document at least 30 people from the same part of Africa living within walking distance of each other.

These details may not seem like much, but they are a crucial addition to our understanding of Africans in the colonies. Ethnographic and ethno-historical methods have been useful to get at African life in early America, but they tend to work better with African Americans than with pre-1808 African-born migrants. Elsewhere, such as in Portugal and Spain, the Catholic Church forced the acknowledgement of the humanity of slaves, and civil law granted them a few nominal rights. As a result, there is much we can learn from those records.

But in British North America, the most commonly available information relates to the categorization of Africans as property: in wills and probate inventories, in plantation records and runaway advertisements, and in related governmental and court records. There is little to no information about their history and culture.

There are a couple of places to look for hints—primarily slave-related advertisements that appeared in colonial newspapers. As one of the few sources in the North American archive where African cultures are acknowledged, the notices have proven indispensable to historians. Most don’t record cultural information but rather the region of the African coast from which the person’s slave ship arrived: the Gold Coast, “Calabar,” “Angola.” Sometimes just “Guinea.” Their veracity is suspect, however, since they were frequently drafted by planters whose knowledge of their slaves’ background was virtually nil, hence the prevalence of phrases like “a new negro” and “a lad from the Guiney country.”

Still, for South Carolina at least, not all newspaper ads were the same. Some were for runaways, but many others were workhouse advertisements, generated when a suspected runaway was captured away from home. Prisoners were then housed in the Charleston, South Carolina workhouse until reclaimed.

The owner was not present so the information had to come from the captive, and it tended to be more detailed. The workhouse warden would place an ad in the newspaper, providing as much information as he could. Workhouse ads contained more references to “Keeshees,” “Congoes,” and “Mandingoes” than to “new negroes.” The information needs to be handled critically, of course. Closely read, the notices suggest that many of these ethnonyms emerged as the product of conversations between captives, interpreters, and interrogators, a process which itself provides valuable insight into relations among Africans. 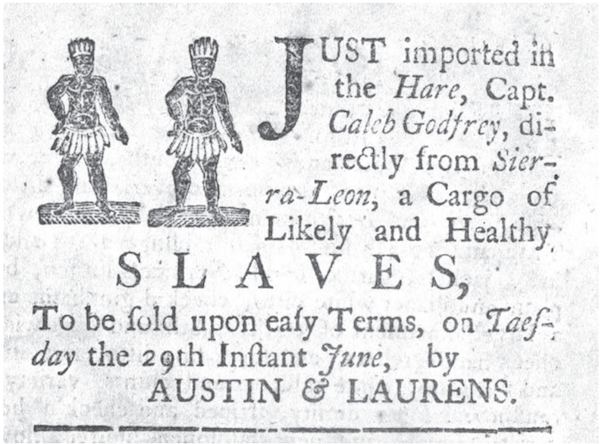 Advertisement for slaves from the Hare. South Carolina Gazette, June 17, 1756.

Another underutilized source is testimony by Africans. Not the dozen or so canonical slave narratives that most historians know, but the incidental (and often accidental) glimpses of autobiographical testimony by Africans that can be found in sources ranging from court records, to church records, to obscurely published reminiscences and local histories. Most of these are brief, and most are related in “as told to” fashion by whites. But given the sparsity of the record, they are invaluable sources that can help us to recover the African migrants’ humanity.

A group of scholars has collected almost a thousand such testimonies from across the Atlantic world, including many from North America, which eventually will be viewable via Studies in the History of the African Diaspora—Documents Project (SHADD) at York University in Toronto. The project, on which I’m an editor, is slated for completion in 2018.

Even without the names of the 72 captives at the center of my research, armed with these scraps of detail, the numbers themselves can tell an important story. Statistics from the the 17th and 18th centuries are notoriously spotty, but it appears that Africans probably constituted the largest group of transatlantic migrants to British North America, outnumbering even the English.

By the latest estimates, almost 279,000 people were carried directly from Africa to North America before the American Revolution. If we add those Africans and people of African descent who were brought to North America from the Caribbean, via the inter-colonial trade, the true number is probably closer to 350,000 out of a total of 800,000 Old World migrants. And that wasn’t the end of it. Another 100,000 Africans would arrive in the years between the end of the American Revolution and the end of the legal slave importations in 1808, against about 50,000 immigrants from Europe.

It is certainly fair to question comparisons between aggregated “Africans” and disaggregated English, Scots-Irish, French, and Germans. Unfortunately we’re faced with another information gap—the political identities that Africans carried to North America are mostly unrecoverable, for statistical purposes at least. But we do know what regions they came from. If we break those down, pre-revolutionary migration looks like this: 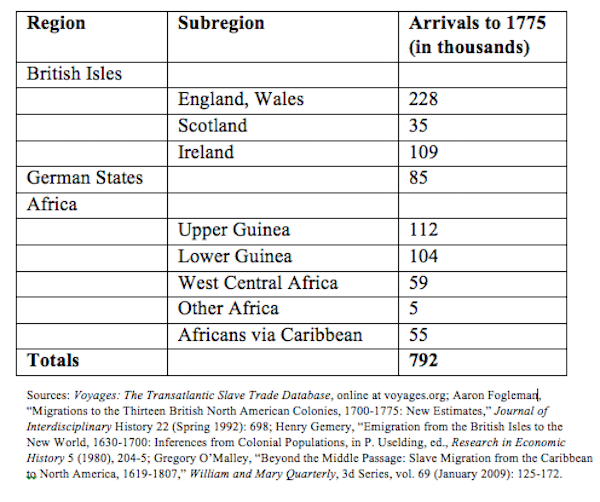 We could debate the historical and cultural coherence of such artificial designations as “Upper Guinea” and “Gold Coast”; but we could probably do much the same for “England” and “Germany.” The point is twofold: that Africans constituted a significant proportion of the early American population, and that our interpretations should take full account of their history and differences. Up to this point historical accounts generally haven’t done that.

Once historians start thinking about Africans as people and not solely as property or laborers, we will also need to engage more deeply with African history. Even so, I must admit that having undertaken that task myself has not allowed me to exorcise the ghosts of the Hare captives. I imagine scenes from their lives, working, creating, and dying. In this way, I’ve lived with them, but I’ll never know them.

is a historian of Atlantic slavery. He teaches at the University of Essex. His latest book is The Voyage of the Slave Ship Hare.