Hamilton is the hottest show on Broadway, filled with hip-hop songs, R&B rhythms, and tri-cornered hats. Its multi-racial cast portrays the pantheon of Revolutionary greats, and for many a starry-eyed critic this sing-along with the founders offers “a factually rigorous historical drama.” Those are the words of Jody Rosen in The New York Times, and he is not alone. As an academic who spent years studying Aaron Burr before producing a scholarly biography, I can say emphatically that rules of historical rigor do not apply to Hamilton.

The musical follows an old playbook that divides the founders into heroes and villains. This started after the Revolution when Charles Willson Peale began compiling portraits of “Revolutionary Patriots” and displayed them in his renowned Philadelphia Museum. In 1818, a Russian diplomat and artist, Pavel Petrovich Svinin, observed that “every American considers it his sacred duty to have a likeness of Washington in his home, just as we have images of God’s saints.” In death, Washington figuratively became a god, when an artist attached his iconic face and head to a classic pose of Jesus sitting on a cloud and ascending into heaven. The impulse to glorify the founders is still with us. They were romanticized in the silent film era, and in innumerable, hokey Hollywood movies since. The Patriots awed New York theater critics during World War II, and 1776 rocked Broadway in 1969, with Jefferson, Adams, and Franklin singing and dancing their way to independence. Have we already forgotten HBO’s gushing tribute, John Adams? 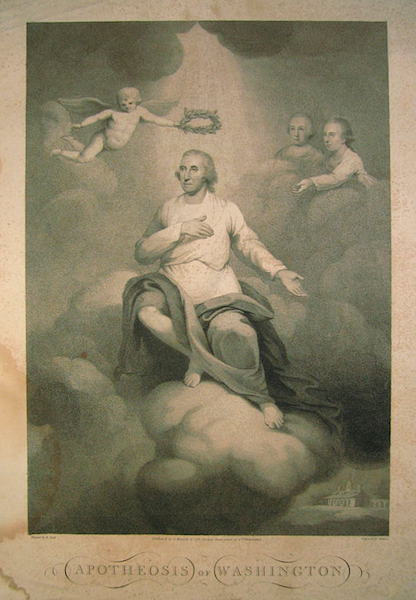 “The Apotheosis of Washington,” an 1800 engraving of the first U.S. President by David Edwin.

The drama of the founders has overtaken the reality. In the undergraduate seminar I teach, “America’s Founding Myths,” I ask my students to identify the life masks of John Adams and Thomas Jefferson, produced in 1825, which is as close as we can come to capturing their likenesses. None of my students recognized them. Why? They are old. Adams is jowly and bald. There isn’t an ounce of glamor in these unflattering busts. The reason that Hamilton is so popular is that the theatergoer is treated to vigorous youth, brazen sex appeal, macho brashness, capped by so-called genius—all wrapped up in a loving and whimsical portrait of a Hamilton who “tells it like it is” in the pounding, nonstop rhythms of hip hop. Which guy do you want to be? A shrunken Jefferson, or the dashing and daring Hamilton who, like Peter Pan, never appears to grow up?

No one watching Hamilton will want to be Burr, one of the most interesting figures of early American history. Leslie Odom, Jr., who plays Burr, has a lovely voice, but his portrayal echoes a familiar slur: the opportunist. Or to use Hamilton’s favorite insult of Burr (and others): a “cunning” man, who carries himself with aristocratic airs. In Hamilton, Burr is a mere prop, a villainous foil, his personality an overblown caricature. He is portrayed as a man who lacks principles, unwilling to believe in, or fight for, anything that matters.

The historical Burr was no less passionate about the Revolution than Hamilton, eagerly joining the arduous 350-mile march through Maine wilderness to Canada in 1775. He was appointed aide-de-camp to General Richard Montgomery, who died during the invasion and lived on as a Revolutionary martyr. For courage under fire, Burr received a commendation from Congress. Contrary to the song lyrics, he wasn’t “waiting” for anything.

The men he later commanded admired him, and he believed in expanding democratic rights to uplift and empower poorer men. He was not pompous or aloof, nor a man of mere surfaces, nor a Chesterfieldian dandy, as his slanderous enemies pretended. His New York wing of the Jeffersonian party, the “Burrites,” were men of mixed class backgrounds, whereas the Schuyler-Hamilton Federalist faction was a top-down organization favoring elite interests. Falsely casting Burr as an aristocrat is a rhetorical ploy: It incorrectly shifts the blame for class prejudice onto him.

By taking sides in a mudslinging fight for power that goes back more than 200 years, Hamilton misses Burr’s actual contributions. He was a skilled innovator of democracy, working to make elections, financial services, and even the U.S. Senate more fair and transparent. In New York, he was charged with “revolutionizing the state,” because he backed progressive policies for funding internal improvements, debtor relief, and establishing a more democratic method of electing state senators. He founded the Manhattan Company, the first bank to extend financial services to ordinary merchants and mechanics outside the ruling elite. As vice president, he presided over the Senate’s impeachment trial of Supreme Court Justice Samuel Chase in 1805. His judicious behavior, which helped to maintain the impartiality of the judiciary, won him grudging praise from many Federalists; one called him “one of the best presiding officers I ever saw.” A man with sophisticated ideas, respected for his impartiality and scrupulous conduct—this Burr never appears in Hamilton. 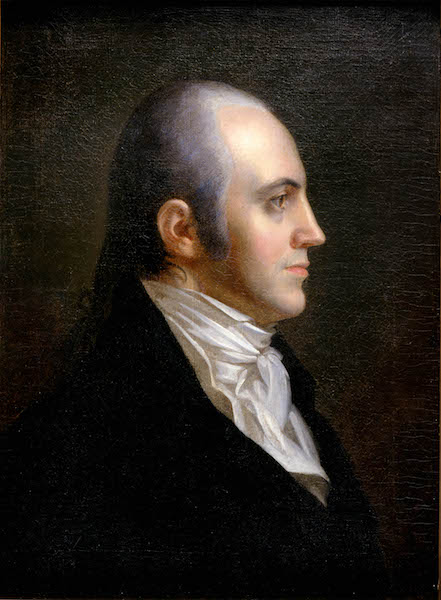 An 1802 portrait of Aaron Burr by the painter John Vanderlyn.

Reducing Burr to a villain turns the musical into a lopsided morality tale, glossing over the complexity of early America in favor of characters we can cheer for. Thus hip-hop Hamilton unabashedly celebrates the American Dream; the conceit that the country has always been the land of opportunity. Hamilton represents the immigrant made good, because he was born on the Caribbean island of Nevis. Left out of the upbeat story is that Hamilton—and the Federalist Party he headed—were hostile to the idea that the United States should ever be led by newcomers. It was the Federalists who pressed for a constitutional amendment barring naturalized foreigners from elected offices, and it was that villain Burr, in the New York Assembly at the time, who gave an eloquent speech defending the liberal promise of the young republic. “America stood with open arms and presented an asylum to the oppressed of every nation,” he said. “Shall we deprive these persons of an important right derived from so sacred a source as our Constitution?”

The musical puts feminist words in the mouth of Angelica Schuyler, Hamilton’s sister-in-law, presuming she wanted to tell Jefferson to rewrite the Declaration to include women. This is absurd. In truth, Aaron Burr was far ahead of Hamilton, Jefferson, and Adams in advancing the ideas of English writer Mary Wollstonecraft, the leading Enlightenment advocate of women’s rights. Burr and his wife Theodosia educated their daughter as they might have a son: She could read and write at the age of 3, then mastered French, Italian, Latin, Greek, mathematics, history, and geography. The idea that women were the intellectual equals of men was a radical one, and Hamilton attacked Burr for it, calling him a proponent of “Godwinism.” (William Godwin was Wollstonecraft’s husband.)

Finally, Hamilton wrongly claims that the duel with Burr was over the election of 1800, and that Burr knowingly shot Hamilton after he saw him fire a bullet in the air. Wrong again. The real cause of the duel was that Hamilton attacked Burr’s character (and refused to apologize) when Burr ran for the New York governorship in 1804. Conveniently missing is the fact that Hamilton supplied the pistols, and the one he used had a secret hair trigger. This gave him an unfair advantage and violated the gentlemanly code of conduct.

Can we expect a more accurate musical someday? Probably not. Interestingly, in times of political turmoil, the pop-culture pendulum often swings in a critical direction. In the 1930s, the iconoclastic painter Grant Wood (best known for his American Gothic) mockingly reworked the Parson Weems tale of George Washington, as the cherry tree slayer who would not lie. The same artist turned Paul Revere’s ride into a surreal jaunt through a fairytale town, with Revere astride a miniature rocking horse. Wood’s point was simple: In the midst of the Great Depression, bedtime stories about the founders were suitable for children but not adults. It was time for Americans to grow up and embrace their real history, a darker one. Gore Vidal did the same in 1973, when the breakdown of Nixon’s Watergate was in full sway, publishing Burr, a fictional history, in which Jefferson is savagely shown as a Janus-faced, dilettantish, ruthlessly power-hungry politician. In times of trouble, a little skepticism (and sarcasm) goes a long way.

Hamilton may be delight to watch, but let’s not convince ourselves that it honors the discipline of history. When he interviewed Lin-Manuel Miranda, Late Show host Stephen Colbert joked: “I didn’t have to read the Bible, because I saw Jesus Christ Superstar.” That pretty much says it all. The musical Hamilton is to the historical Hamilton what Charlton Heston’s Moses is to … well, you get the picture.

, T. Harry Williams professor of American history at Louisiana State University, is the author of Fallen Founder: The Life of Aaron Burr, and the forthcoming White Trash: The 400-Year Untold History of Class in America. She is also the coauthor with Andrew Burstein of Madison and Jefferson.