Last year, when my driver’s license was set to expire, I went online to apply for a renewal but was thwarted by error messages. Exasperated at the time I had to spend entering my information and getting nowhere, I called the help hotline only to be informed, after a 20-minute holding time, that because I had gotten eyeglasses since my last license was issued, I was ineligible for online renewal and would have to go to my nearest Department of Motor Vehicles office.

Like all other motoring Americans, I know full well what a visit to the DMV entails. You pull a number to wait in lines to pull more numbers to wait in more lines, all the while avoiding eye contact with your fellow motorists. To kill time, you might scrutinize the portrait of the governor on the wall, looking benignly down at you. As a student, I suppose I have the luxury of time, and could have gone to the DMV almost any day of the week. But, somehow May rolled around, and there I was driving around with a license that was about to expire. It’s hard to motivate yourself to spend a whole morning or afternoon waiting in line.

What got me to take my number at the DMV wasn’t the fear of being stopped by the police, but rather the thought that I might be turned away from a bar for having an expired license. I know, I know; we all have our priorities. So I finally made my way to the DMV and took a number to get a new license. 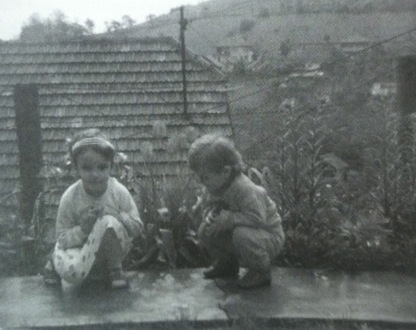 Jagesic and her sister in Bosnia before the war

All of which is to say, I have come a long, long way. Such a cavalier attitude toward my “documents” and officialdom is a recently acquired privilege.

For most of my life, identification documents, especially their expiration dates, were a serious, life-altering business that left no room for nonchalance. I was born in Bosnia and fled the country with my family during the civil war of the 1990s. I was only in second grade, but one of my clearest memories of that time was waiting in a long line in Zenica so that my mother, sister, and I could get the required documents to join our father who, like many Bosnians, had already fled to Hamburg, Germany. It’s a strange childhood memory to hold on to since waiting in a line and filling out paperwork is nothing remarkable. But even as a second grader, I knew that this line and paperwork was not just any line and any paperwork. There were lots of questions about whether or not we would be able to get the papers. The stakes were palpably high. 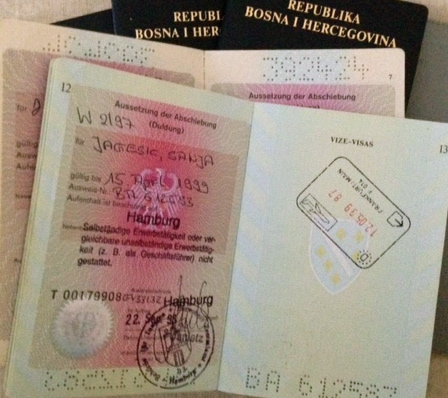 I didn’t know it then, but waiting in lines for important and potentially life-changing paperwork was going to define my life for a while. My family and I spent the next six years living in Hamburg, where several times a year Bosnian refugees would have to report to the local refugee authorities, who would tell us that we could either spend several more months in Germany or that we would have to go back to Bosnia. We would line up as early as 5 a.m. and spend all day going through various offices, standing in long lines, and filling out what seemed to be mountains and mountains of paperwork to find out if our life would go on as it had, or if things would abruptly reverse course.

In the last couple of years that we lived in Germany it became increasingly common for families to be deported and sent back to Bosnia, or other parts of the former Yugoslavia, on the spot, with less than a couple of hours to gather their belongings. It was like a horrid game of bureaucratic roulette: black, you stay; red, you go. 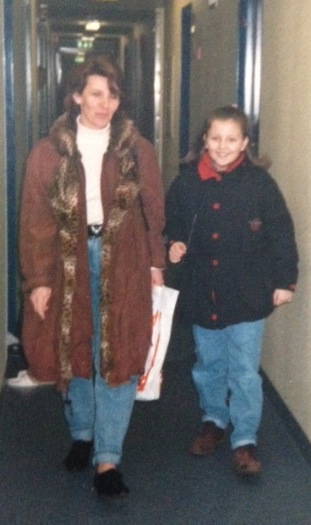 Two months prior to getting the letter that we would be resettled to the United States, my family and I almost lost the game. As usual, we were waiting to hear how long we would be able to stay in Germany when an official called us into his office and told us we had two hours to prepare to be sent back to Bosnia. My parents pleaded with him that we only needed a couple more months because we had applied to a refugee resettlement program and were waiting to find out the date of our departure. He was unconvinced, but after some more pleading, he gave us an hour to produce the required papers or be deported that day. My mother had to run across the city to get the document confirming that we needed to stay in Germany because we were awaiting resettlement. Meanwhile, my sister, father, and I stayed in the official’s office as collateral.

When we were resettled to Boston, it seemed to me that the same pattern of long lines and worry over paperwork was awaiting us here. Social security numbers, work permits and, eventually, green card applications—each document hard to obtain, but holding out its own promises about what the future might hold, a hopefully less tenuous future. Even when things proceeded smoothly, I always felt a great anxiety about the next paperwork hurdle and the possibility that the next visit to the downtown immigration office could turn south.

Each additional document we secured meant we were closer to being eligible to apply for citizenship, but it was all too reminiscent of life in Germany for me. I was always afraid that something would be wrong, and we would somehow end up being sent to yet another place where we’d have to start over again.

It was mostly this fear that drove me to apply for my American citizenship on the very first day that I was legally allowed to do so in 2005. I wanted to belong, permanently. I spent the months leading up to that first date of eligibility researching all the requirements and putting my application packet together. I went to the post office several days earlier and even paid extra for the confirmation of delivery option. While I was able to overcome my tendency to procrastinate, there was still my inner klutz. In my eagerness, I neglected to sign the check that I sent along with my application, and the package came back to me several weeks later. I was horrified, worried that this would negatively affect my chances of citizenship, and might condemn me to expulsion from the union. I signed the check and mailed the citizenship application package back at once, and didn’t sleep soundly for days. But finally, the naturalization papers came.

For me, becoming an American has brought, among many other things, the comfort of knowing that nothing irrecoverable will happen if I don’t submit a form on time, forget to sign a check, or allow a document to expire. I can, finally, walk around with the same casual attitude toward officialdom that has long distinguished Americans.

is a fellow with the Strategic Data Project at the Center for Education Research Policy at Harvard University and a Ph.D. student at the University of Chicago. She is a recipient of the Paul and Daisy Soros Fellowships for New Americans.