The Southwest Chief in Colorado. Photo courtesy of Wikimedia Commons.

Amos, a one-legged Amish man, was having trouble with his new prosthesis. He left the leg in his sleeping compartment and came to the diner on crutches—a hazardous ambulation on a moving train.

Because Amish do not buy health insurance nor take Medicare or Social Security, he rode The Southwest Chief from Chicago to California and went to Mexico to see a doctor. He paid cash for the leg in Tijuana.

“A van picked us up at border and took us to a clinic,” he told me. “They have everything down there.”

Now he was eastbound, crossing the treeless high plains of eastern Colorado. Amos stared out at the sagebrush and sighed, “I just want to be back on the farm. I don’t suppose you know anything about feeder calves, do you?”

I knew enough to make conversation, and by the time dessert arrived, I had learned how to finish, or fatten, a calf with corn.

I’ve ridden Amtrak since college, and, in recent years, logged nearly 100,000 miles researching and promoting a book on rail policy. Dinner with Amos was one of my more remarkable encounters. But it wasn’t entirely unusual. During meals in the diner, where Amtrak practices community seating, Americans who might never otherwise encounter one another sit face to face at tables and break bread.

All mass transit brings Americans together, of course. When we travel, the self-segregation we otherwise practice—by race, income, education, politics, culture, religion, class, or political tribe—evaporates. But a train is special. Unlike a 20-minute commute on a city bus or subway, or an airline flight in the cramped seat of a fuselage, a train requires the commitment of time and space. Passengers ride together for hours, even days, and during the journey have the liberty to move about, eat and drink, and socialize.

Trains also have an intimacy with landscape. Incapable of negotiating steep topography, they follow valleys, hug rivers and oceanfronts, and strike out across plains and desert basins. Train travel induces a sort of reverie—a hypnotic feeling of being adrift on the geography of America. Passengers, many of whom are seeing the country for the first time, marvel at its beauty, diversity, and exoticness. And those feelings carry over to an inclination to engage one another and embrace the same diversity within the rolling coaches.

So while I still fly on airplanes, if I can work a long-distance train into my travels, I get aboard. When I want to feel and hear the zeitgeist of America, I get on a train.

Early in the Great Recession, on The Empire Builder—running from Chicago to the Pacific Northwest—I encountered jobless men converging on North Dakota with just a few dollars in their pockets and the hope of work. In Williston, men who had arrived months earlier in the oil patch boarded the train to go home for a few days and see family before heading back to sprawling “man camps” erected by Halliburton.

A roughneck having a beer in the observation car told me a woman was arrested for prostitution the day before at his man camp.

“The cops called it a crime. It was a public service. Those man camps are tense.” 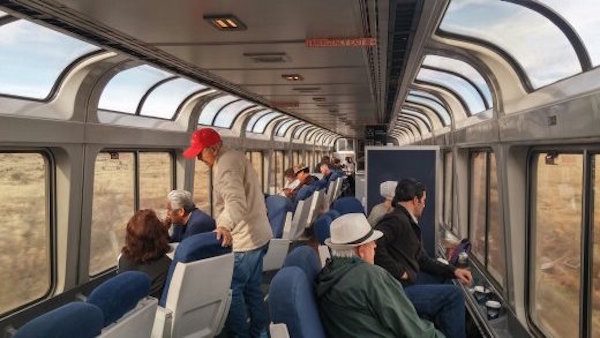 The train rolled past campers with no running water parked out on the frozen prairie and rigs flaring off natural gas-like colossal candles. The snow and sky shone red and apocalyptic.

He had not been home for weeks.

“There’s no place out here for a family. And my wife, she’s sick. She got the cancer.”

On The Sunset Limited in New Mexico, I chatted with a Texan returning home from Los Angeles after being checked over at Kaiser Permanente. He tapped his chest.

“A weird virus took out my heart muscle. Two years ago, I had a heart-lung transplant.”

We watched pronghorn antelope sprint away from the train and mule deer standing in dry washes.

When he got up, he clapped me on the shoulder, “Every day is a good one … remember that.”

Over the years, I’ve dined with school teachers, a deputy sheriff, a distraught widower, an apprentice mortician, a veterinarian recruiting for slaughterhouses, a priest who discovered the call in Vietnam, an aging movie star, and a wheezy 98-year-old who was a door gunner on a Flying Fortress. A woman at our table whose own father had been a POW in Germany said, “Thank you for your service.”

He seemed bemused: “It wasn’t my idea. I got drafted.”

In Everett, Washington, my train picked up a cocky young man who told us he had piloted gunships in Iraq and was taking the train to Wenatchee for the funeral of a comrade who had committed suicide. Someone bought him a beer. Years later in Kansas, I ate a steak with a huge man in his late 30s, straw-colored hair flaring out beneath an oily baseball cap. He was like a sheep dog gone feral. He’d been in the “special forces.”

Inwardly, I groaned. Is anyone just a grunt, a cook, or a clerk anymore?

“I got fragged over in the sandbox and had to get out. I’m six foot five and used to be 215. I could run forever,” he said. “After my wife left me, I let myself go.”

Over the years, I’ve dined with school teachers, a deputy sheriff, a distraught widower, an apprentice mortician, a veterinarian recruiting for slaughterhouses, a priest who discovered the call in Vietnam, an aging movie star, and a wheezy 98-year-old who was a door gunner on a Flying Fortress.

He laid natural gas pipeline in Oklahoma, lived in motels, ate Chinese and take-out pizza each night, and guzzled gallons of beer. Flush with money, he apparently lived a lonely, haunted life.

Always, I take late meal reservations so if my companion(s) are compelling, we can linger over coffee or a glass of wine. The dining car stewards are in no hurry to bus the tables and throw us out.

Not all meals are a pleasure. Teenagers remove their retainers at the table, young lovers speak only to one another, people text on their Smartphones, passengers come to the diner still wiping sleep from their eyes, and others have no filter for what passes as dinner conversation.

Leaving St. Louis, I met two sisters heading west to visit a son. The mom said, “He’s such a good boy, called me every day when my husband passed.” The boy had testicular cancer when he was 16 but had still impregnated his wife on two occasions. Unfortunately, the poor dear miscarried both times.

She prattled on and on. As my father used to quip, some people never come up for air. I gobbled my food and fled the car.

On The Coast Starlight outside Salinas, the owner of a restaurant in the Wilshire district of Los Angeles told me she was worried. There were Muslims on the train. “Are they in Michigan, too?”

Yes, I say. Muslims are urban homesteading blighted neighborhoods in Detroit. “They’re making a go of it there.”

I listen, nod, and try not to be judgmental or revealing. If the conversation grows intense or tedious, there is always the window and a “Hey look at that” as a way to change the subject.

We could be looking at a hillside of wind turbines in Iowa, iceboats racing on the Hudson River, dapper worshipers exiting a corrugated tin church in Mississippi, delinquent kids in New Jersey heaving rocks at the train, kudzu vines strangling telephone poles in Georgia, or homeless men huddled in cardboard shacks beneath I-5 in Seattle.

A train trip unspools in an endless stream of images and words. And if you listen well, you hear America.

James McCommons teaches journalism and nature writing at Northern Michigan University. He is the author of the 2009 book Waiting on a Train: The Embattled Future of Passenger Rail Service.

Americans, NEXUS, RAIL, railroads, trains, what it means to be american