As Asia continues its rapid advance in the global economy, the resources of Hawaii—as well as its strategic geography—uniquely position it as a portal into the future of relations between the U.S., Asia, and the world.

At a Smithsonian/Zócalo “What It Means to Be American” event supported by the Daniel K. Inouye Institute, Harris was joined by the president of the U.S.–Japan Council, a high-level diplomat, and a renowned chef in addressing the question: “What role will Hawaii play in the Pacific century?”

The wide-ranging conversation before a full house at the East-West Center in Honolulu explored trade, the economy, and military strategy, and emphasized Hawaii’s value as one of the nation’s most inclusive and culturally diverse states.

The program kicked off with a traditional oli, or native Hawaiian chant, including the harmonic blowing of conch shells, followed by a Chinese lion dance. Moderator Irene Hirano Inouye, president of the U.S.-Japan Council, opened the discussion by asking each of the panelists to address questions exploring how Hawaii is fulfilling its role on the global stage and what it could be doing better.

“Hawaii is a perfectly located and extraordinarily capable platform for diplomatic activity,” said Kurt W. Tong, U.S. Consul General to Hong Kong and Macau. “Every successful meeting of the Pacific Islands Conference of Leaders that President Obama has held has been here.”

There’s “a constant flow of soft-power exchange that Hawaii should aim to be a nexus for,” Tong said. Hawaii “can act as a magnet for really thoughtful people from around the world, for big set-piece government meetings, but also lots of conversations among leaders of the Asia Pacific. From the perspective of Washington, that’s how we would like to ‘use’ Hawaii.”

Admiral Harris concurred on the value of Hawaii’s physical location for different reasons, pointing out that Hawaii is home to the United States Pacific Command, America’s largest and oldest command with about 400,000 total personnel throughout the Pacific.

“I look at the world through the lens of the threats,” and protecting the United States and its friends and allies from those threats, Harris said. In that regard, he said, location is crucial. “Being in Hawaii makes it especially helpful. It’s where we need to be.”

He said that the U.S. government is in the midst of a “rebalance” in terms of its economic, diplomatic, and military commitment to the Asian Pacific region. “The most visible piece,” of the rebalance is a military shift, Harris said. “Everything that’s new and cool that the military has is coming to the Pacific,” whether it’s combat ships aircraft carriers.”

Harris added that the most important piece in the effort to both recognize and bolster the value of the region is not military but economic. “The business community here—the civic community—is very welcoming of the military. We enjoy this synergy that’s special. It’s critical that we continue the rebalance and continue to grow the relationship between the military and all of you here in Hawaii.”

The third panelist, Roy’s Restaurant chef and founder Roy Yamaguchi, whose chain stretches across both Hawaii and the mainland, stressed the importance of cross-cultural understanding to Hawaii’s economic success. Yamaguchi, who is known for fusing French and Japanese cuisine, described himself as an “Army brat” who grew up in Japan but whose family heritage is rooted in Hawaii.

“Growing up on army base—I probably think Japanese,” Yamaguchi said. “I’m an American, but for some reason I just feel that I think Japanese.” People from Hawaii, he said, “understand the Asian culture, so it’s easier to do business.”

Inouye asked the panelists to address another ongoing challenge for the islands: Ambitious visions for the future aside, Hawaii’s draw as a tourist destination has generated significant economic benefit, but also contributed to a soaring cost of living. How, she asked, can Hawaii balance growth and its global aspirations while also ensuring that it is “livable and affordable”?

“That’s probably a question for the governor of Hawaii,” Tong quipped, to appreciative laughter from the crowd.

“If you think about a place like London or New York or Hong Kong—where I live now—it’s very expensive, but people continue to move there,” Tong said. The government needs to work hand-in-hand with business to ensure livability.
“That’s a struggle that every major successful city on the planet has to contend with,” he said. “But I don’t think that’s a reason not to be ambitious.”

Harris acknowledged Hawaii’s high cost of living, but, he said, “It’s not insurmountable. The advantages of living here are great. People come here to vacation; we get to live here.”

During the question-and-answer period, one audience member wondered why, despite Asia’s obvious emergence as a global leader, the United States remained stubbornly Euro-centric in its cultural leanings.

Harris observed that while the U.S. will always have strong ties to Europe, “we’re changing as a nation,” and Asia’s primary role will become more apparent in the months and years ahead.

The question brought to mind a comment made earlier in the evening by Tong regarding the multiple ways in which Asian cultural influence is growing in the United States. Tong described his own experiences as “an arrogant guy from Massachusetts” who has spent decades living and working across Asia. His wife is Japanese, and their children are “double kids,” meaning “they really mix both cultures, they understand both.””

“I meet more and more people in the United States who are living ‘salad bowls,’” Tong said. “I think, as a nation we’ve moved beyond the whole melting pot idea to really appreciating that a salad tastes better than a soup.”

is the editorial director of Zócalo Public Square. 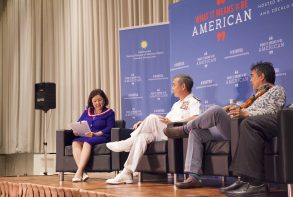 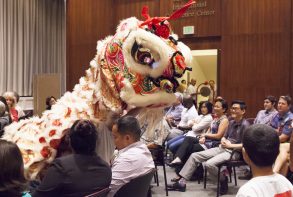 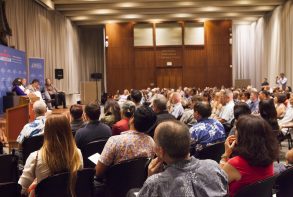 A full house at the East-West Center in Honolulu 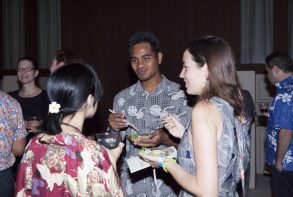 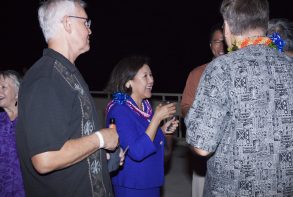 Irene Hirano Inouye, President of the U.S.-Japan Council, speaks with guests at the reception