Washington, D.C. locals built a temporary Capitol to house Congress, which was used as a prison during the Civil War. Photograph by William Redish Pywell. Courtesy of the Library of Congress.

As the national capital, Washington, D.C. always has carried special meaning—representing both the federal government and the United States as a whole. No matter how Americans might feel about the state of the nation at any given time, they typically respect and revere the city—visiting on vacations and school trips by the millions each year.

Many might be surprised to learn, therefore, that at one particularly precarious point in the city’s history during the War of 1812, Congress seriously debated abandoning the site and moving the capital to another location. Rooted in the ideological and regional disputes of the time, the moment highlighted the deep symbolic value Americans placed on Washington long before it evolved into a showplace of American culture, learning, and history as well as a stage for marches, protests, and rallies.

Disputes over the physical form and development of what would become Washington, D.C. began almost immediately after President George Washington chose the site for the city in 1791, with opposing political camps hoping that the new capital might be molded to reflect their particular visions for the new nation. Two major political parties had congealed in Congress during Washington’s administration: the Federalist Party, which envisioned a strong federal government at the helm of an increasingly powerful American nation, and the Democratic-Republicans (also referred to as the Republicans or Jeffersonians, after their leader Thomas Jefferson), who believed in a smaller and weaker national government, one lacking both the power and the funds to tyrannize Americans as the British government had prior to the Revolution.

George Washington never belonged to either of these parties, but his political beliefs leaned toward those of the Federalists—and the architect he chose to plan the new capital, the French-born Revolutionary War veteran Pierre Charles L’Enfant, delivered a grand and impressive city plan that reflected a Federalist perspective on U.S. power, prestige, and government authority. L’Enfant’s design placed the President’s Mansion and the Capitol Building atop existing hills, allowing each to loom over sections of the city. It featured long, uncommonly wide avenues, emphasizing the breadth and grandeur of the cityscape. It called for individual states to erect “statues, columns, obelisks, or any other ornaments” to commemorate Revolutionary War heroes. And, in terms of sheer size, L’Enfant’s capital dwarfed the footprints of other American cities, spreading across an area more than six times the 1.5 square miles at the southern tip of Manhattan that made up New York in 1800.

Unfortunately for the Federalists, the infant republic lacked the means to build on such a grand scale. In 1800, President John Adams and Congress moved into half-finished and just barely functional versions of the White House and Capitol Building. Summing up the state of the capital, Connecticut Congressman John Cotton Smith remarked that “instead of recognizing the avenues and streets, portrayed on the plan of the city, not one was visible, unless we except a road with two buildings on each side of it, called the New Jersey Avenue. The Pennsylvania Avenue, leading, as laid down on paper, from the Capitol to the Presidential Mansion, was then nearly the whole distance a deep morass, covered with alder bushes.”

After Jefferson and the Democratic-Republicans swept to power in the election of 1800, they followed through on their small-government convictions and left responsibility for further construction and development of the enormous city to the local residents. Over the next three decades, Jeffersonians confined federal government support for projects in the city almost exclusively to the stretch of Pennsylvania Avenue between the White House and the Capitol. Calls for assistance from the locals, whose tiny tax base could not begin to support management and development of a city the size of Washington, went largely unheeded.

It was this context into which British troops marched during the War of 1812, which had started when the United States attacked British Canada in the hopes of resolving ongoing disputes with the British Empire over interference with Native Americans, and over British naval policies that affected the United States during the Napoleonic Wars. But in August 1814, after easily defeating American soldiers and militiamen at Bladensburg, Maryland, British marines captured the otherwise undefended American capital. Happily repaying the Americans for the burning of the Canadian capital of York (now Toronto) earlier in the war, British troops set fire to the public buildings in Washington. The White House, the Capitol Building, the executive office buildings, and the Navy Yard all burned. 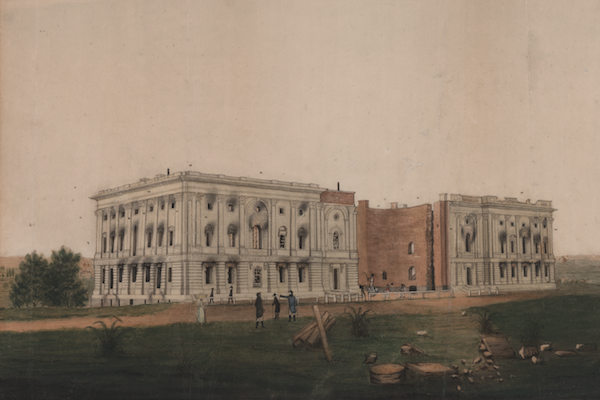 The U.S. Capitol after it was burned by the invading British during the War of 1812. Courtesy of the Library of Congress.

Although their homes and private businesses had been spared by a summer storm that prevented the fires from spreading, weary Washington residents suddenly found themselves facing another—possibly even greater—threat to their livelihoods. Almost immediately, members of the House of Representatives, who had been burned out of their chambers, began debating the removal of the federal government from the District of Columbia. On September 26th, meeting in the largest building still standing in Washington, a converted hotel that housed the Patent Office and the U.S. Post Office, Congress began to debate the future of the capital. Congressman Jonathan Fisk, a Democratic-Republican from New York, first proposed the formation of a committee to “inquire into the expediency of removing the Seat of Government.”

Largely hailing from the Northern states, proponents of removal argued that Washington had been proven insufficiently defensible and that a safer location should be found for the government. They also decried the inconveniences of cramming themselves together in too small a building and the indignity of what one member referred to as “making laws among ruins.” These latter complaints might have been remedied by temporary relocation of the government while the Capitol Building was reconstructed. But supporters of Washington feared that, once out of the District, Congress might never choose to return. These fears must have been exacerbated when advocates for removal raised longstanding complaints about Washington that stemmed from both its lack of development and from its location in the South, several days’ travel beyond the Northern cities that housed most of America’s banking and financial interests. Congressman Fisk noted, for example, that Congress would benefit from being “where they could have better opportunity to call into action the resources of the nation.”

Defenders of the Potomac capital asked what message departure would send to the American people and to their British enemies. Would they double the victory already won by the British by abandoning the site of their capital altogether? Would they leave behind the local residents of the District, many of whom had invested in land and businesses there? And what precedent would be set if the capital were moved? Nathaniel Macon, a Democratic-Republican from North Carolina, warned that, “if the Seat of Government was once set on wheels, there was no saying where it would stop.” Was Congress prepared to perpetually fight over the location of the capital?

On October 15, after three weeks of debate and two successful procedural votes to continue discussion of the motion, the issue was settled when the House voted 83 to 74 against removal. While views on the proper size of the city and the government’s role in its development had long been party battles, the subject of removal proved to be more tied to regional geography. Not surprisingly, Congressional delegations from those states nearest to the District, including Southern states, voted most overwhelmingly against removal, while congressmen from the North favored it. Delegations from states west of the Appalachians largely split their votes.

For their part, local residents banded together during and after this close call in Congress to ensure that the government remained in Washington. Even as the House debated removal, District banks offered $500,000 in credit to Congress to fund reconstruction, and the following February, Congress took them up on their offer. Also, recognizing that the cramped accommodations at the former Patent Office upset Congress, local residents formed a joint stock company which eventually spent $25,000—several hundred thousand dollars in today’s terms—to construct a temporary meeting place for Congress. Over the four years that Congress met in what came to be called the Old Brick Capitol, from 1815 to 1819, the federal government paid the Company a mere $6,600 in rent.

Although the locals didn’t come close to recouping their investment, their actions helped to reaffirm the District as the permanent home for the government. With the removal bill defeated and the reconstruction of the public buildings begun, Congress closed for good the question of the location of the capital city. National politicians, local residents, and all Americans now could return to debating every other aspect of the city’s form, function, and funding. By the 1830s, Jacksonian Era politicians had begun to leave behind the Jeffersonian insistence that the District fend for itself on matters of funding and development. And over the next two centuries, the city not only grew into but also, in many ways, lived up to and even surpassed the grand plans laid down by Washington and L’Enfant.

Adam Costanzo is a historian at Texas A&M University-Corpus Christi. He is the author of George Washington’s Washington.