Sitting atop the Burt open pit mine, on the Mesabi Range, in 1905. Photo courtesy of Library of Congress.

On June 2, 1916, 40 mineworkers from the St. James Mine in Aurora, Minnesota, walked off the job. The men, mostly immigrants, were fed up with the dangerous conditions they faced blasting and hauling iron ore in open pits and underground shafts, and with the prolonged abuses of mining company managers. The men had had enough. They fanned out across the almost 100-mile Mesabi Iron Range to entice fellow laborers to drop their work and join the common cause.

Their small labor disturbance would mushroom into one of the early 20th century’s most contentious battles between organized labor and management. Within two weeks, the 40 disgruntled mineworkers had grown to 100, then 1,000 strikers picketing in the streets. By July, 10,000 to 15,000 men were idled.

The Mesabi Iron Range strike was a remarkable feat of protest, and during that summer of 1916, the “Reds” won, for a time. After several unsuccessful attempts to hit back at their industrial oppressors, unskilled newcomers, some in the country for less than 10 years, brought America’s ruling industrial class to an unwelcomed reckoning with organized labor. This was possible because several groups of immigrants overcame deep divisions of history and language to band together to trade Old World nationalist pride for a new, American class consciousness.

It might have never happened if not for an earlier set of Finnish and Italian immigrant mineworkers who had gone on strike in 1907. Many of these men had already been radicalized by oppression in their homelands before they came to Minnesota in the early 1900s. By 1906 and 1907, conditions in the mines were particularly bad. Wages were low, and men worked 10- to 12-hour days. Worse, more than 100 miners had died, some by falling hundreds of feet down deep mine shafts. The situation inflamed the immigrants anew, and many joined the nascent Socialist Party of America and an industrial labor union, the Western Federation of Miners. The Enterprise, the pro-company newspaper in Virginia, Minnesota, described the especially vocal Finns as “fiery followers of the red flag.”

In the 1907 Strike, Finns and Italians clashed with newly arrived South Slavic replacement workers, or scabs, that the mining companies brought in to replace them. These immigrants from Croatia, Slovenia, Bulgaria, Serbia, and Montenegro had also fled from an oppressive government, the Austro-Hungarian Empire, and came to America to escape extreme poverty. They were willing to do almost anything to make money, including taking the jobs of striking Finnish and Italian ore workers, who later wound up blacklisted from area mines, some never to return to industrial work. Relations between the ethnicities—who gathered in their own saloons and worshipped in their own churches and who generally had little to do with each other outside of the mines—soured, for a time.

But gradually the South Slavic workers, now more established in their new American surroundings, became increasingly upset with wages, hours, and working conditions. In 1908, one anonymous mineworker sent a letter to company executives complaining that his people had been exploited during the 1907 strike, and that they would not be fooled again. South Slavic workers began attending meetings in the Finnish immigrant social halls and listening to the speeches of Italian union organizers. 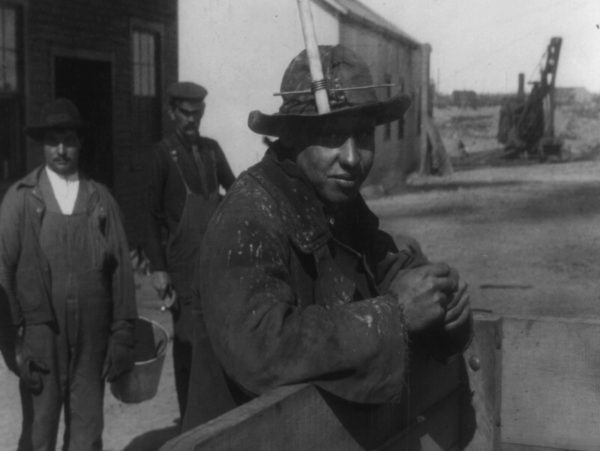 Three miners in Minnesota take a break from their work, 1905. Photo courtesy of Library of Congress.

Their newfound interest in organizing coincided with the arrival of the Industrial Workers of the World, or IWW, in the Mesabi area. The Wobblies, as they were known, were radicals and had been invited by the Finns. Wrangling the diverse, multi-cultural band of workers into a cohesive team wasn’t easy, but the IWW brought in a cadre of organizers who spoke most, if not all, the languages of the Range—from Finnish and Swedish to Italian to Croatian, Slovenian, and Macedonian—and they had a receptive audience. Minnesota’s immigrant unionists had lost their love for the Western Federation of Miners, which had affiliated with the conservative (and at times anti-immigrant) American Federation of Labor in 1911. By 1916, though, the miners were increasingly militant.

As the former foes became friends in a united effort to better the lives of the Range’s working class, they faced widespread suspicion from their neighbors. World War I was raging in Europe, and many paranoid Minnesotans had come to believe, incorrectly, that the IWW was backed by the German and Austrian governments. Mining company managers, in the meantime, fumed. They had been turning massive profits on the backs of cheap immigrant labor. In 1901, when the United States Steel Corporation incorporated, absorbing smaller companies like the Oliver Iron Mining Company (the Mesabi Range’s leading producer), it became the world’s first billion-dollar corporation, with a market capitalization of $1.4 billion. An immigrant mineworker’s daily pay hovered around $1.75 to $2.25.

Without scabs to keep the mines running, the industrialists fought back, testing the newly allied miners’ resolve. Companies constructed trenches around mine entrances, running razor wire across their tops. One mining company manager compared the region to the battlefields of World War I.

After several unsuccessful attempts to hit back at their industrial oppressors, unskilled newcomers, some in the country for less than 10 years, brought America’s ruling industrial class to an unwelcomed reckoning with organized labor.

Hired guards beat workers and prevented strikers from engaging with other workers. Mine guards, local police, and vigilantes joined in, making mass arrests and inciting armed skirmishes in the streets. In late June, mining company police shot and killed John Alar, a striking Croatian worker, who was the father of three children under the age of five. Days later, gunfire broke out when one group of striking workers were attacked by company thugs in the town of Biwabik. Two people died: a mining company guard and a bystander selling soda pop. The strikers involved in the skirmish had been defending themselves, but they were charged with first-degree murder. Astonishingly, so were IWW organizers, including the Italian anarchist Carlo Tresca and Native American Frank Little, who were more than 35 miles away when the deadly confrontation occurred. The whole lot were arrested and deported from the Ranges.

The dust finally settled in September, when the Wobblies, fearing a difficult winter, reluctantly agreed to a truce. The strike was widely considered a defeat, with the IWW’s organizing efforts stalled, and company brass boasting that they had won an absolute victory. But over the months that followed, the companies made concessions that they likely wouldn’t have made if the strike hadn’t happened. Workers got a 10 percent pay increase and an eight-hour workday: significant improvements, even if the companies wouldn’t say so out loud.

Minnesota’s iron workers had to find their voice amid profound exploitation and cultural roadblocks, and had to refine their sense of identity in a new American context. In the years that followed, the Finns held on to their radical beliefs and ways, but the Minnesotans from the Slavic nations would march on to create a new mainstream, their sons and daughters helping to form the United Steel Workers and becoming founding members of a new, working middle class that remains a political force today.

Gary Kaunonen is a historian and documentary filmmaker based in Minnesota. He is author of several books, including 2017’s Flames of Discontent: The 1916 Minnesota Iron Ore Strike, which won 2018’s Hognander Minnesota History Award.