My grandmother’s visits from New York City always began with what I call The Great Unpacking, which took place on our dining room table the very second she crossed our threshold. I always wondered if her fellow travelers knew what my nonni was carting in her assortment of tote bags, not to mention the gigantic piece of luggage that was stuffed solely with food. As an Italian-American family living in Virginia in the 1970s, our only chance of getting what we needed to survive rested on Grandma’s small shoulders. Our neighbors thought of an Italian supper as sodden garlic bread from the freezer, mushy spaghetti topped with orange-tinted Ragu, and “cheese” that came from a green cardboard tube. Twice a year, Grandma came to rescue us, bringing the mother lode from 187th Street and Arthur Avenue in the Bronx. 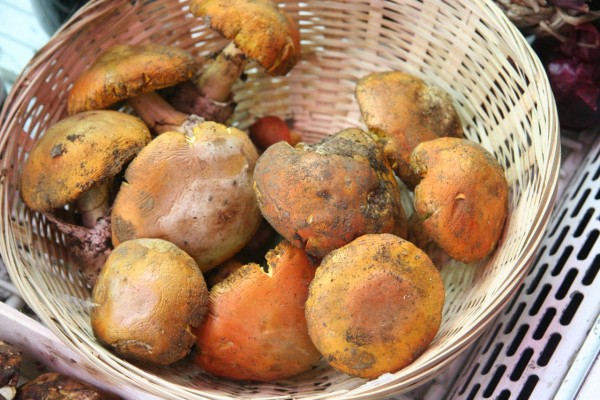 Inside her bags were huge tins of extra virgin olive oil and gigantic, hand-cut wedges of Parmigiano and Pecorino. There were cans of imported plum tomatoes and foil-wrapped jars of crinkly, oil-cured olives. I dove in frantically to uncover the big, golden balls of dried mozzarella, knotted at the top and stuffed with butter, and the crunchy wheels of toast known as frese. The fresh bread and pastries filled with ricotta and rum-scented cream would be devoured pretty quickly, but the spicy dried sausages made by my mother’s cousins were stashed away to last until the next visit. Most precious to my mother were the cans of espresso to brew in our macchina, which would soon be bubbling on the stove and filling the house with an intoxicating aroma as my grandmother and mother chatted away in Italian. As I sat in between them, munching away on Nonni’s homemade honey cookies and walnut-stuffed figs, the reminder of who we were and where we came from washed over me.

Grandma understood our needs in Virginia because she had experienced the same struggle when she came to the Bronx from her small town in Calabria after marrying my grandfather in 1926. Both accomplished cooks, my grandparents conducted an ongoing search for the right ingredients for family meals. They sought out the most reliable Italian vendors, who provided a small supply of imported foods. From Jewish dairy shops they bought fresh milk with the cream still on top, and scoops of sweet tub butter that was similar to what they had used in Italy. Produce, meat, and fish were purchased from trusted merchants in the Italian neighborhoods of the Bronx. 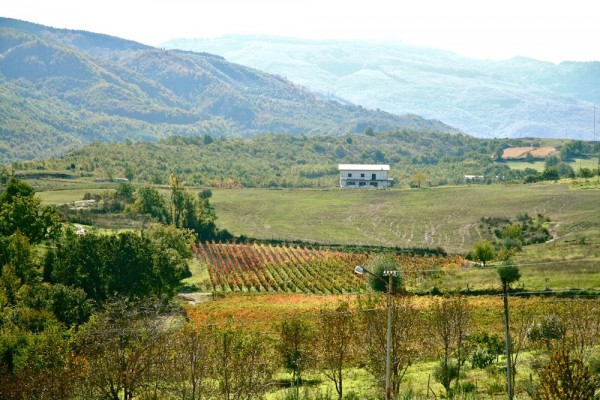 View of the countryside in Carolei, Italy, where DePalma’s great-grandparents lived

But certain things just could not be duplicated. Back in their village of Carolei, my grandmother used freshly milled wheat and corn flour from the town mill, ground specifically to order for making breads and fresh pasta. (Grandma never stopped complaining about the flour in America, which she said ruined her pasta dough.) She missed the fragrant black anise seeds and oregano from the wild plants growing in the surrounding hills. Just outside their doors were porcini and figs to be foraged and vegetables to be picked from the family garden. My great-grandfather raised and slaughtered pigs, making dried sausages and prosciutto, and my grandmother and great-grandmother used the lard for their pastry dough. And there were grapevines, of course, for making homemade wine. In a New York scraping its way out of the Great Depression and on the road to another World War, the family was determined to be Americans, to live out the dreams and desires that had brought them there, but in the kitchen, their hearts remained in Italy.

The kitchen, for my grandparents and so many other past and present newcomers to America, is a place to escape the tasks of assimilation and adaptation and find comfort in food. Even the humblest stove and a few cupboards can offer a safe haven and a way to preserve cultural identity and honor the traditions left behind. This expat yearning for the foods needed to cook family recipes has profoundly influenced the way that we all eat and shop.

My own family played a role in that, not just through our own home cooking, but also by starting successful food businesses. Our cousins, young twin boys who immigrated in 1947, eventually became restaurateurs and merchants of Italian imports. After 60 years in business, Mike’s Deli still thrives in the Arthur Avenue Retail Market in the Bronx, the place I visit every month for the same staples of Italian cooking that Nonni brought to us in Virginia. And it really came as no surprise that I too would become a chef. 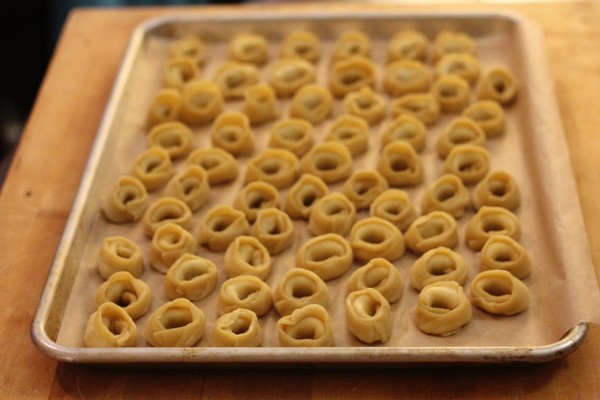 Fresh tortellini (made by DePalma)

Professionally and in my own home kitchen, I’ve reaped the harvest from seeds sown by my grandparents’ immigrant experience. In the 15 years I spent as the pastry chef of Babbo, a groundbreaking Italian restaurant in New York, I often paused and marveled at the abundance of imported Italian products I so easily accessed that they never would have imagined. And as a home cook, I reap the benefits of a local grocery store in my Washington Heights neighborhood that carries fish sauce, kimchi, and Sriracha, along with Danish butter, Spanish pimentón, and Israeli couscous. On weekends you might find me cooking dishes from India or Southeast Asia that feel about a million years from my childhood, when going exotic meant cracking open the Old El Paso Taco Kit.

I, like most Americans, can thank the generations of immigrants—like my cousins—who started out selling ingredients and cooking in small family restaurants as a way to make a living, serving their own communities first, and eventually anyone else with a nose for good food. The indiscriminate power of something delicious landing in a satisfied belly is a reliable way to overcome suspicion and prejudice. Goods cross international borders by boat, over highways, and through the air for the simplest reason: someone from somewhere else really misses them.

The “American melting pot” isn’t just a metaphor. It’s about what we eat for lunch. And when you look at what Americans love to eat, you see that we haven’t just tolerated our immigrant waves; we’ve embraced them. Every major city in America offers a panoply of ethnic delights spanning every continent on earth, and you’d be hard pressed to find a small town that doesn’t have at least a Thai noodle joint or taco shop in the local lineup.

The list of dishes that are indigenous to America is short; almost everything we eat originated elsewhere and evolved, layer upon layer. I think what is means to be an American cook is to appreciate, celebrate, and contribute in a way that enriches our culinary culture and makes it more than the sum of its parts. In restaurant kitchens and as a cookbook author, I devoted myself to using traditional ingredients in my desserts in new ways that would be exciting and expansive to my diners. Food has been one of our greatest triumphs of harmony and acceptance. For proof of this, we need not look farther than our pots, pans, and plates.

is a James Beard Award-winning pastry chef and author of the cookbook Dolce Italiano: Desserts from the Babbo Kitchen.