I am a hapa, yonsei Uchinanchu (a mixed-race, 4th-generation Okinawan-American) who was born in Riverside, California, in 1973 and raised in the shadow of the Cascade Mountains in Washington state. My mom’s roots stem from Spanish-Basque migrants in California and white southerners in Tennessee. My father is Okinawan from Hawaii. Because I don’t look quite white, people frequently ask, “What are you?” From an early age, even though Hawaii and Japan were enigmas to me, I have had to explain my relationship to these “exotic” places.

Growing up, we lived by my mother’s family and visited her parents weekly at their road-side motel near a Puget Sound ferry landing, but I knew little about my father’s childhood, an ocean away, on a Piihonua sugarcane plantation near Hilo. I got a glimpse on occasional vacations to visit family on the Big Island of Hawaii or my aunties in Los Angeles. The only other traces were evident in the Spam in our sushi, the fact that we called instant ramen noodles saimin, and in the echoes of Pidgin English in Dad’s accent that refused to be erased.

I am a painter, and at the heart of my paintings is the journey I’ve been on to understand how these different currents have formed my American experience. I’ve followed their flow back in time to the canefields of Territorial Hawaii and early 20th-century Okinawa, Japan.

My father, George Kina, worked as a family practice doctor in our small Norwegian community of Poulsbo. Like so many other post-World War II Japanese-Americans, he had moved away from the ethnic enclave of his youth, made English his primary language, and tried to fit as much as possible into the American mainstream. My father’s mother Mitsue Gubu could not fit in, however. At age 55, she came to live with us. Grandma Kina was always in the present moment—laughing, teasing, watching TV, reading junky romance novels, and snacking on even junkier sweets or “weird” foods like dried cuttlefish and crack seed. But she never explained these tastes or her own story to us. Her own mother characterized her as someone who “couldn’t even make rice without burning it.”

In my grandma’s 89th year, I could waste no more time – I wanted to hear the stories of her Nisei generation (those born in the U.S. whose parents immigrated from Japan), and what they and the Sansei (children of the American-born generation) remembered of the Issei (the first Japanese immigrants to America). I hoped to learn more about our family history so I could pass this along to my own daughter. Although I had been back to his Big Island plantation community many times by then, in 2010, my father and I, with my then 5-year old daughter Midori in tow, returned to Piihonua with a purpose – to “talk story” with elders. Collectively, we would remember. 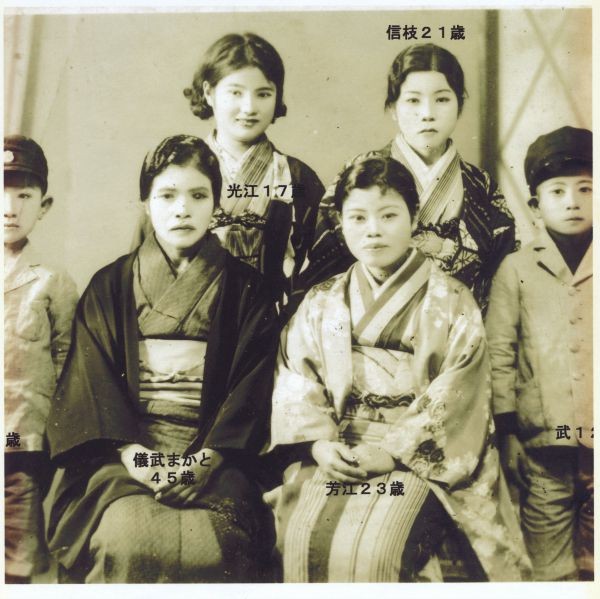 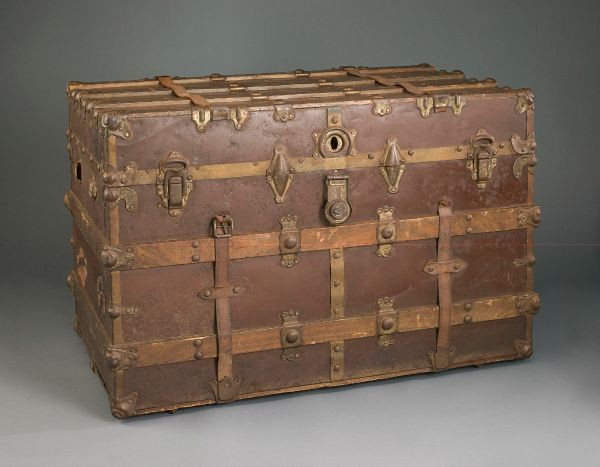 My great-grandfather Sakiji Gibu came to Hawaii before it became a part of the United States from the former Ryukyu Kingdom of Okinawa, which was annexed by Japan in 1879. He arrived in 1912 as a contract sugar plantation laborer as part of the Issei Uchinanchu (first-generation Okinawans) recruited by white American settlers who had recently overthrown the Hawaiian monarchy and aggressively imported foreign workers to drive down the cost of plantation labor. The Okinawans were just one ethnic group in a long succession of recruited foreign plantation labor to Hawaii that also included Chinese, mainland Japanese, Filipino, Korean, Portuguese, and African-American workers. My great-grandmother Makato Maehira arrived in Hawaii as one of the 20,000 “Picture Brides” who were married to men without seeing them because of severe immigration restrictions.

Grandma Kina was born in 1921, the third of four girls. Her two older sisters were Kibei—born in Hawaii, but raised in Okinawa. This was a common practice amongst the Japanese—wealthier families sent their children back for a “proper” education and cultural immersion; poorer families like mine were motivated by having one less mouth to feed. At 17, Grandma Kina joined her sisters as she was said to have been a particularly unproductive cane field worker with quite a big and loud mouth to feed.

Unlike her sisters who were fluent in Japanese, Grandma Kina spoke Pidgin English and Japanese and could not fully understand the local (and outlawed) Uchinaguchi language or standard Japanese. Because of this, she had difficulties assimilating into life in Okinawa. My relatives in Okinawa remember that she used to sing to herself in the mirror in English and tap dance in front of their house in Yonabaru. She also hung her laundry outside—including underwear—which was something the family considered impolite and a sign of her “stupidity.” She went back to Hawaii after only six months.

I found an old photograph of her from 1939 when she was at a port stop in Kobe, Japan, en route back to Honolulu. In the photo, my grandma is standing next to her older sister Nobue in front of an ocean liner. Grandma Kina has an open mouthed “All-American” smile and with a coy, three-quarters view, and is wearing a Western-style coat; her sister is wearing a kimono and looking sternly and directly at the camera. Nobue must have been tasked with escorting Mitsue back to the sugar plantation on the Kamakura Maru. My aunts told me that Grandma Kina’s mother greeted her return with, “Why did you come back?” 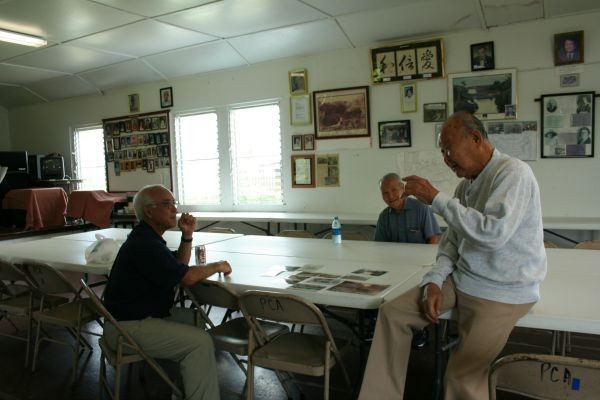 In 2012, it was my turn to go back to Japan to reconnect with our extended family. I made two trips that year—one with my dad (his second visit ever) and one alone. As disoriented tourists, Dad and I walked one day through the Kokusaidori Makishi Public Market in the bustling capital of Naha. My father stopped suddenly in front of a fish vendor recalling the familiar smell of katsuobushio. His grandmother, he remembered, used the dried bonito fish shavings to make dashi broth, which appears in everything from miso soup to ashitibichi (Okinawan pig feet soup). “Gochiso sama deshita,” he mumbled. “I used to say that after eating.”

He bought a whole dried fish wrapped carefully in newspaper to take home as a gift for mom. The smell of the fish began to trigger more memories of Japanese words he’d learned at Japanese school and the bits of colloquial Japanese they had used at home. On his first visit, our relatives had noted his old-fashioned way of speaking since it was a style of Japanese from when his grandparents first immigrated.

My father and I visited the rebuilt Maehira family home my Grandma had stayed at in Yonabaru. It had been carpet bombed in the “typhoon of steel” by the U.S. during the 82-day long Battle of Okinawa in World War II. Four of our family members, including my great-great-grandmother, were among the over 200,000 people killed. If my Grandma Kina and her sisters had stayed, would they have been victims, too?

In the post-war years under U.S. occupation, my great-grandmother sent care packages back to the family in Okinawa—smuggling U.S. dollars by sewing money into the hems of clothes and filling canning jars with homemade caramel candy and hiding money in the tops of the lids. My father’s generation had no idea of the mass destruction or of the outpouring of help from Hawaii’s Uchinanchu. No one talked about those efforts, or the ways the roots and branches our family trees have meandered and tangled and found their way to new water. 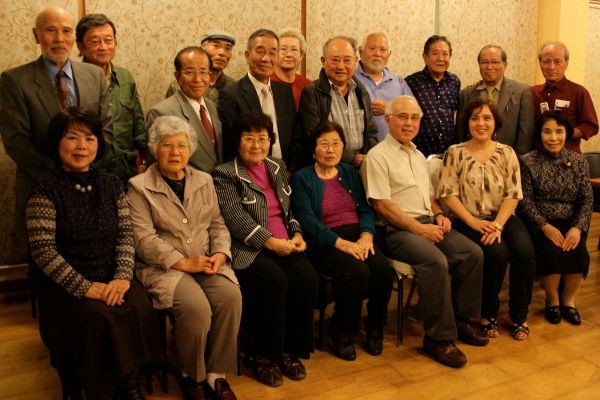 These journeys with my father to hear family stories, and cull from family and public photographic archives led to my “Sugar” and “Blue Hawai’i” series of oil paintings, some of which are in the Sugar/Islands: Finding Okinawa in Hawai’i—the Art of Laura Kina and Emily Hanako Momohara exhibition at the Japanese American National Museum in Los Angeles. Making these paintings has enabled me to tread back through these currents of history in search of my origins, propelling me to the present and leaving me standing on multiple American shores. Okinawa has reverted back to Japan and Hawaii has become a state, but the U.S. military continues maintain a strong presence on both islands, and they’ve both been transformed by tourism and histories of colonialism. To understand my relationship to these spaces as an American, I keep painting.

I am getting to know the younger generation of relatives in Okinawa and I have started leading a study abroad course in Okinawa on Okinawan art and politics at DePaul University in Chicago, where I teach. My father and I are trying to learn Japanese. He’s doing this, he says, because he regrets not paying attention in Japanese school as a kid and I am doing it because I hope one day not to need a translator to hear my own family’s stories. Maybe we can even learn some of our indigenous Uchinaguchi language.

is an artist and professor of art, media, and design at DePaul University, and co-editor of War Baby/Love Child: Mixed Race Asian American Art. Her artwork is featured in the book that accompanies the exhibition Sugar/Islands: Finding Okinawa in Hawai’i—the Art of Laura Kina and Emily Hanako Momohara.


She wrote this for What It Means to Be American, a partnership of the Smithsonian and Zócalo Public Square.

art, family, Hawaii, history, painting, what it means to be american