In recent years, fashion leaders have provoked criticism for incorporating Native American imagery in their designs. In 2011, Urban Outfitters introduced a line of Navajo-themed clothing and accessories that included the “Vintage Woolrich Navajo Jacket,” the “Ecote Navajo Wool Tote Bag,” and the “Navajo Hipster Panty.”

The Navajo Nation sued the company for copyright infringement of its name and, after a five-year court battle, the two sides settled. At a 2012 Victoria’s Secret fashion show in New York, model Karlie Kloss wore an extravagant feathered headdress and turquoise jewelry, inciting a backlash that led the company to issue an apology. Two years later, Ralph Lauren used historic photographs of Native Americans confined on reservations to tout his line of rugged, Western-style clothing. He removed those images and expressed his regret after Indian groups and others complained about his insensitivity.

The public debate led by Native American advocates, scholars, and other commentators focused less on the issues of copyright and profits and more on a lack of historical awareness. Feathers, turquoise, and patterned prints might represent superficial and fleeting aesthetic choices, but they also reflect indigenous traditions that have endured centuries under assault. Clothing style may seem innocuous, but it often expresses profound cultural meaning. In the battlegrounds of conquest, dress can become an important weapon when one group usurps the symbols of another. The past that Urban Outfitters, Victoria’s Secret, and Ralph Lauren failed to appreciate was America’s long and troubled history of cultural appropriation in the service of empire.

That history might have begun with buckskin. Perhaps Americans do not equate putting the sueded and fringed jackets on rugged men with draping feathered headdresses on lingerie models or printing Navajo patterns on panties. But the familiarity of buckskin as an emblem of the West—of ’60s counter-culture, and of American manhood—has obscured its native origins.

Indigenous groups across the continent wore garments of treated hide from a variety of species. The abundance of deer, however, led to widespread use of their skins. Native designers adapted it for their specific needs. The characteristic fringe, for example, served as an efficient means to shed water. Narrow strips drew moisture away from the body and allowed it to drip from the ends. By the 17th century, European traders and backcountry settlers recognized its value, and began bartering for buckskin jackets, trousers, and moccasins. During the American Revolution, colonial rebels adopted the style for its utilitarian and symbolic value. According to historian Philip Deloria, “playing Indian” permitted colonial fighters to assert their Americanness by differentiating themselves from Great Britain.

The appropriation continued after the United States established its independence. As the country moved toward a concerted policy of Indian removal, buckskin clothing—with its projection of rugged individualism and ostentatious fringe—became a highly visible tool in the cultural project of territorial expansion. By adorning themselves in the indigenous wear, Anglo-American men symbolically wrested the Native American masculinity that they admired, practicing what ethnographer Renato Rosaldo terms “imperial nostalgia”—the act by which agents of empire replaced guilt and shame with mourning and celebration of the very peoples they had destroyed. 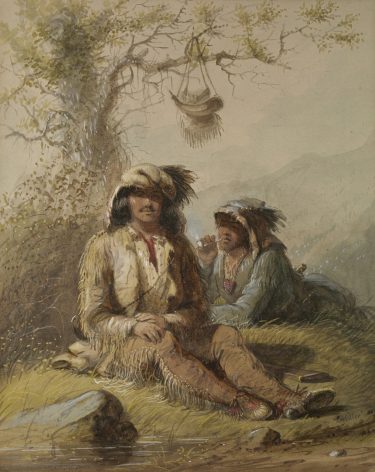 As such, during the 1820s through the 1840s, as the United States extended its economic influence into the interior of the continent, removed Eastern Indian groups to lands beyond the Mississippi River, and invaded Mexico, buckskin chic achieved iconic status, ostensibly demonstrating the Western male’s attainment of an imagined Indian-ness. In literature and art, white Americans invented aspects of indigenous cultures—emotional liberation, privileged violence—that they desired to emulate.

In an 1837 account of buckskin-clad Rocky Mountain trappers, Washington Irving noted that it became a “matter of vanity and ambition with them to discard every thing that may bear the stamp of civilized life, and to adopt the manners . . . of the Indian.” When Irving referred to the mountain man’s aversion to “civilized life,” he identified a counter-culture symbolism encoded in buckskin. Many Anglo-American men of this period fled to the West to escape the avarice and heartlessness that market competition and pursuit of profit had created in the East. By dispossessing the Native male of his self-dominion, these interlopers claimed to have embodied an original, essential manliness that contrasted with the materialist dandy of the city.

Authors like Irving, James Hall, and Timothy Flint, and artists like George Catlin, Alfred Jacob Miller, and Charles Deas communicated these ideas to an eager audience. When James Fenimore Cooper first introduced his frontier hero in The Pioneers (1823), he adorned him in “[a] kind of coat, of dressed deer-skin” as well as breeches, from which the character acquired the moniker Leatherstocking. In the popular A Tour on the Prairies (1835), Irving wrote of the rangers Jesse Bean and John Ryan “equipped in character; in leathern hunting shirt and leggins [sic].” Such was the fashion that in an 1833 biography of George Washington, author Mason Weems described the young Virginian as “Buckskin” to set him apart from the British general Edward Braddock.

Buckskin became a fixture of the wardrobes of fur trappers, overland merchants, and volunteer soldiers of the 19th century who sought connection to an ideal of the exceptional American male. For many, careers in the contested regions of the West had promised transformation from inconsequential greenhorns into conspicuous veterans—and grimy, worn, fringed garments attested to the perils and hardships that had forged their vital manliness.

Sometimes newcomers presumed too much, and put on the outfit before they had earned it. In 1839, Francis Lubbock, future governor of the Lone Star State, volunteered for the campaign to remove Cherokees and allied groups beyond the borders of the Republic of Texas. In his enthusiasm, he commissioned a tailor to provide him with “a pair of fine buckskin pants such as worn by frontiersmen.” Unfortunately, while he slept in camp, rain soaked his prized skins, and when he awoke and sought the warmth of the fire, his pants quickly and uncomfortably shrank. “They got tighter and tighter all the time until . . . ,” he recalled, “I had in a manner to cut them off my limbs.”

With the nation’s attention drawn away from the West and toward the controversies between the North and South, the vogue of tanned hides and fringe seemed to have waned by the Civil War. During the decades after, however, it enjoyed a resurgence. During Reconstruction, emasculated Southerners and battered Northerners sought common ground by resurrecting Western manhood, and buckskin served as a ready symbol. During his campaigns against indigenous groups, Lt. Col. George A. Custer wore jackets of that type, one of which is currently on view at the Smithsonian’s National Museum of American History. 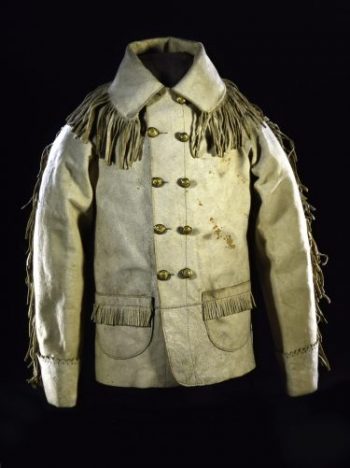 The showman William F. “Buffalo Bill” Cody wore the style. So did “Kit” Carson and “Davy” Crockett in the dime novels of the time. Theodore Roosevelt was so enamored with the image and its message of masculine superiority that he famously posed in buckskin for a series of photographs to accompany a book about his experiences out West. By donning the fashion of the Native American, these white men outwardly exhibited their extravagant manliness and celebrated their roles as agents of empire.

Images of buckskin-clad Westerners continued to reassure American audiences during the 20th century. Between 1930 and 1960, for example, John Wayne wore the style in at least eight film performances, including his Custer-esque portrayal of Capt. Nathan Brittles in She Wore a Yellow Ribbon (1949) and his turn as Davy Crockett in The Alamo (1960). Along with Fess Parker’s popular Crockett (and whose movie prop coonskin cap made of raccoon is also in the collections of the museum), these iterations of the honest, just, vital, and abjectly American frontiersmen reinforced the perception of the United States as the defender of freedom and democracy during the Cold War—in contrast to its missions of self-serving economic expansion and sponsorship of right-wing dictatorships.

By the late 1960s, counter-culture groups like the hippies emerged to oppose the American mantra of progress, consumption, and power—and they adorned themselves with buckskin anew, this time as a rejection of U.S. materialism and empire. They imagined that the garment endowed them with Indian simplicity and respect for nature. As historian Sherry L. Smith has shown, some hippies actively participated in the Red Power Movement. Others supported ecological causes, but many, if not most, were faddists who followed the superficial chic of the moment without understanding the cultural significance of their adoption of Native American imagery.

The history of the misappropriation of buckskin as an emblem of Anglo-American exceptionalism helps explain the criticism of 21st-century fashion designers’ marketing of indigenous symbols. Fashion houses may believe that the incorporation of feathered headdresses or Navajo geometrics celebrates Indian-ness, but they are mining an unfortunate past in their attempts to achieve a fresh aesthetic for profit. Much like generations of men in the United States who donned buckskin, they disregard the centuries-old project of usurping Native American emblems as a tool for conquest and subjugation.

Jimmy L. Bryan Jr. is the author of The American Elsewhere: Adventure and Manliness in the Age of Expansion. He is an associate professor of history at Lamar University in Beaumont, Texas.