In this painting of the Capture of the Hessians at Trenton, Gen. Henry Knox stands by the left shoulder of Major General Nathanael Greene, who is seated on the white horse at right. Image courtesy of Yale University Art Gallery/Wikimedia Commons.

In late 1783, General Henry Knox, formerly a bookseller from Boston who had become a trusted military subordinate to George Washington, wrote the first draft of an address to be presented to the commander-in-chief by his officers. Their Revolution won, the Continental Army’s leaders wanted to express their heartfelt gratitude to the general, “under whose auspices,” as Knox wrote, “the Army have been led to glory and victory, and America to Freedom and Independence.” Young Knox also urged his comrades to look to America’s future. The Revolution’s success, he noted, “presents one of the most precious occasions, ever offer’d to the human race, for establishing Liberty and happiness.”

On the eve of peace, Henry Knox clearly viewed himself as an American who devoutly believed in the new nation’s founding principles. But just a few years earlier, he—along with Washington and many other Patriots who fought in the Revolution—had considered himself a loyal subject of Great Britain. Between 1775 and 1783 these new Americans had had to discard their loyalty to the only country they had ever known, attaching themselves to a new national identity.

At the same time, the families they had left at home underwent a similar process of Americanization. During the war, Knox and his wife Lucy Flucker exchanged hundreds of letters and their correspondence provides us with a rare glimpse into how men and women decided to abandon Great Britain and take the essential first step toward adopting new loyalties to the United States. Embracing their new national identity involved fundamental sacrifices of family, home, and basic beliefs. The couple, whose reasons for ultimately rejecting Britain were not the same, found the process long and difficult. 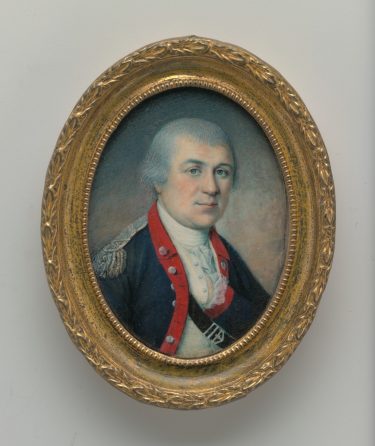 Henry Knox was born in 1750 to a struggling maritime family in Boston. His father abandoned the brood when Henry was just nine, but young Knox nevertheless grew up with a craving for knowledge and a knack for reading, especially books in military science, and he secured an apprenticeship in a Boston bookstore. On his 21st birthday in 1771 he opened his own shop, naming it the London Book Store to honor the British Empire’s great capital.

Lucy Waldo Flucker entered the store the following year. Six years Henry’s junior, Lucy possessed a formidable personality, a quick mind, an excellent education, and strong opinions, which she rarely hesitated to share with others. She also belonged to an exalted Boston family. Her grandfather, General Samuel Waldo, was a military hero and a successful land speculator. Her father, Thomas Flucker, was a wealthy merchant and a high-ranking crown official in Massachusetts. Her brother, also named Thomas, held a captain’s commission in the regular army and served in British Antigua. Lucy could not have helped but feel pride in an empire that had given her family so much.

After they met, the couple began a passionate courtship. Deeply attracted to one another, 16-year-old Lucy and 22-year-old Henry found they had much in common, including a great love of books, literature, and conversation. After the pair married in June 1774, they expected to spend the rest of their days together as well as to remain faithful subjects of their monarch. During the time of their courtship and marriage, the imperial crisis rapidly escalated in America, but Henry kept his political cards close to his vest. Consequently, he never joined one of Boston’s prewar Whig associations, possibly because many of his store’s customers were British officials and American Tories.

However, when the Revolution began the couple had to choose sides. Shortly after April 1775, they slipped out of the city and Henry joined the assembling Continental Army. He experienced a meteoric rise during the Revolution’s first year, earning command of the army’s artillery branch. In the winter of 1775-76, Knox led a remarkable trek that carried captured British guns and mortars from New York’s Fort Ticonderoga, through the Berkshire Mountains and to the American forces besieging Boston—forcing the British to evacuate and gaining the colonies their first great victory.

Even then, as their letters show, Henry and Lucy viewed the rebellion mainly as a momentous adventure. Little American blood had yet been shed, and the goal of most colonials was reconciliation. Still a loyal British-American, young Knox desired the same cherished liberties and respect enjoyed by His Majesty’s faithful subjects in the British Isles.

Like many ambitious Continental officers, he wanted to be considered a gentleman of honor. Early in the war, Knox spoke of enemy officers with great esteem—and he prized their respect in return. In a letter to Lucy in the summer of 1775, he wrote that a British officer parleying with colonial sentries near Boston’s Neck lamented “this unatural[sic] breach,” wishing only “to Heal” the wounds felt by both aggrieved parties. When recently captured British naval officers dined with General Washington, Knox noted how the men had respectfully presented themselves at dinner: the “one Lieut., one Doctor, one master & four midshipmen” had arrived dressed as “handsome Genteel looking men”; therefore, they too “were dispos’d of Genteely” in return. Knox scrupulously remarked whenever the British treated Continental officers as equals. He still viewed the British as national-kinsmen with whom he wished to put things right.

Lucy Knox’s traditional loyalties early in the war didn’t go to the empire per se, but to her family, all of whom had sided with the Crown. She wrote frequently to her parents throughout the Boston siege, sending letters across hostile lines. By spring 1776, she wrote Henry that she knew that her family had evacuated with the British, but little more. Worried for their well-being, she listened avidly for rumors regarding their whereabouts. That July, as the main armies gathered around New York City, Lucy heard that her father had gone to London and her mother to Halifax—and that her eldest sister, Hannah, might be with the British army encamped on Staten Island. Lucy worried that Hannah’s husband, British Captain James Urquhart, was stationed elsewhere. If Hannah was alone, Lucy wrote, Henry must bring her into American lines under a flag of truce, so that the two sisters could be reunited. Hannah would most certainly do the same for her, Lucy told her husband.

The hard war of 1776-77 had turned Henry against his British identity. In the same months, hard treatment at the hands of her own family forced Lucy to sever her loyalties to the past.

As the war’s costs escalated, however, the couple began to cast off their prewar loyalties. Knox supported the Declaration of Independence when it was announced, but his letters to Lucy indicate that he finally discarded his British attachments during the arduous New York-New Jersey campaign of 1776-77, when the Continental Army suffered repeated defeats and American civilians endured depredations at the hands of enemy redcoats. The season’s fighting famously ended with Washington’s victories at Trenton and Princeton.

Knox’s letters to Lucy during the campaign focused on the army’s movements and his safety. Thus, he didn’t dwell on Great Britain and the empire’s place in America. Afterwards, though, as Knox looked back on the months of hard fighting, it became clear that something had changed. Writing Lucy in January 1777 from winter quarters at Morristown, New Jersey, he began to express disdain for the British. Characterizing the war as “a Contest of Virtue with vice,” he insisted, “My Country demands my poor pittance … to rescue her from Barbarity, Tyranny, & every misery consequent to uncheck’d power.” The British had, among other crimes, sent vile “Hessians … to desolate & lay Waste [to] this Country, almost the only Country on earth … [to] have even the appearance of Liberty.”

Knox continued in this vein into the spring—“[W]e are contending with a people cruel indeed,” he wrote Lucy in April, whose “one Characteristick of Greatness” was “a total debauch of morals.” But at the same time, an attachment to the new United States started to emerge in his letters. Though frustrated that more Americans had not joined the army, Knox confidently told his wife, “I have the Most enthusiastic assurance of mind that it is the Will of high Heaven that America should be great.”

The hard war of 1776-77 had turned Henry against his British identity. In the same months, hard treatment at the hands of her own family forced Lucy to sever her loyalties to the past. Lucy wrote to Henry in Morristown how she felt “sick at heart [and] low spirited.” She especially lamented that her family had abandoned her. “[W]hen I reflect,” she unburdened herself, “that I have a father and a mother, sisters, and a Brother, and yet I am this poor neglected thing, I cannot bear it.”

Later that spring, as Lucy and her one-year-old daughter prepared for hazardous smallpox inoculations, she attempted once more to contact her kin. Hearing new rumors that her sister Hannah had gone to Halifax, Lucy wrote again. She claimed that she still felt “tender affection” for them all, but she reminded Hannah of “the great neglect with which I think I have been treated both by you and my dear Mama.”

Describing the Revolution as a “horrid” war, pitting “Brother against Brother, and the parent against the child,” Lucy begged for news of them and closed with prayers for peace—but the war’s damage was manifest. In the letter’s draft (which is all that survives), Lucy made several deletions that poignantly illustrate the ways she was severing ties to her former life. She originally wrote, for instance, of her “love” for her parents, but struck out the word—and the sentiment—from the missive’s final version. She deleted a sentence explaining how the Knoxes’ little daughter was “very much like her gran mama.” Finally, Lucy referred to Hannah as merely “my Sister,” instead of “my dear sister,” as in the first draft. Lucy’s missive, like her earlier ones, went unanswered, and she didn’t attempt to write her sister again during the war.

Lucy and her daughter survived their smallpox inoculations, and reunited with Henry. But Lucy never saw her Loyalist family again and she only rarely discussed them in the couple’s later correspondence. Like her husband—who ended the war as a major-general and served as President Washington’s first Secretary of War—Lucy Knox looked to the future and toward a new life, one bound together by her young family and loyalty to an independent American nation.

Phillip Hamilton is the author/editor of The Revolutionary War Lives and Letters of Lucy & Henry Knox (Johns Hopkins University Press, 2017). He teaches at Christopher Newport University in Virginia.