The Statue of Liberty’s creator, the Alsatian artist Frédéric-Auguste Bartholdi, grew up in a world apart from the “huddled masses” who arrived in the New World, sailing toward her beacon. Born in 1834, into a rich and prestigious family in Colmar in northeastern France, his ancestors were doctors, pharmacists and bureaucrats who never felt the need to leave their homeland in search of opportunity. And yet he managed to capture something ineffable about the America he visited in 1871, which—along with its placement—has made his statue an enduring symbol.

In the years since, Bartholdi’s statue has come to mean many things to the millions of people she has welcomed to America. For some, she is a tender mother protecting the “huddled masses yearning to breathe free”; for others, she is the guardian of the nation’s ideals—liberty and democracy—against foreign threats. For Bartholdi, too, the statue captured a variety of meanings, like the dignity and rectitude he discovered in cities such as New York, Boston, and Philadelphia alongside the wildness he relished elsewhere in the young nation.

When Bartholdi arrived at New York Harbor on June 21, 1871, he was on a quest to meet potential clients (as he put it, rich “connoisseurs”) to buy his art. His friend and patron, the liberal author Édouard de Laboulaye, admired the United States, and had suggested Bartholdi could bolster his reputation there by building a monument to celebrate Franco-American friendship during the War of Independence. 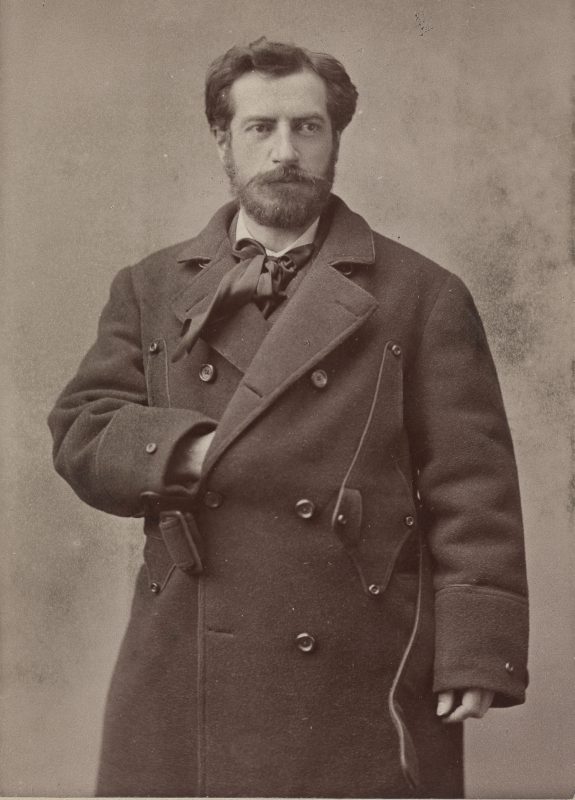 Bartholdi had an idea of what his statue would look like—her basic design was a holdover from an earlier idea he’d had for Egypt—but he needed to refine his vision, find a location, and get financial backing to get it built. To accomplish these things, he would stay in America for more than three months, traveling from Boston to San Francisco.

Bartholdi’s distinct sensibility owed much to his mother, Charlotte, who had been widowed when he was only two. Beautiful and strict, Charlotte was a skilled manager of the family’s connections and properties who made her boys learn English and music, toured with them to London and the Pyrenees, read them Cicero and Goethe, and enrolled them in the atelier of Ary Scheffer in Paris, where they learned to paint and sculpt. Scheffer, a republican, introduced Bartholdi to his political friends, but Bartholdi was no activist: He cultivated friends and clients among republican activists, monarchical nostalgics, and the powerful Napoleonic elites of the Second Empire.

As an adult, Bartholdi still often lived with (and always for) his possessive mother. When he needed a break from her, he journeyed abroad. Between 1854 and 1867, he visited Egypt twice, and travelled through Bavaria, Corsica, Florence, Naples, Rome, and Venice. Dressed in a white turban and a loose tunic, he sailed the Nile and unwrapped mummies in the desert. He mulled building a colossal statue, brandishing a torch, at the Red Sea entrance of the newly dug Suez Canal. His design looked like a female fellah, or Egyptian peasant, and was intended as an anthropomorphic lighthouse celebrating French and Egyptian gifts of civilization to the East.

By 1869, it had become clear that financing a statue in Egypt was going to be impossible, so Bartholdi decided to try to build his colossus in the United States. Charlotte objected to the idea, skeptical that, as her son put it, “the same principles” could be applicable to “two hemispheres.” The leap from the Nile to the Hudson seems unlikely, but many 19th-century European observers considered America an exotic place, notable for its “dirt, untidiness, and noise” and also for the “Oriental” look of its “multitude of flat roofs, topped by a thousand chimneys.” By 1871, Bartholdi was already drawing on such ideas to show that Egyptian monuments could, indeed, be made to suit the United States. 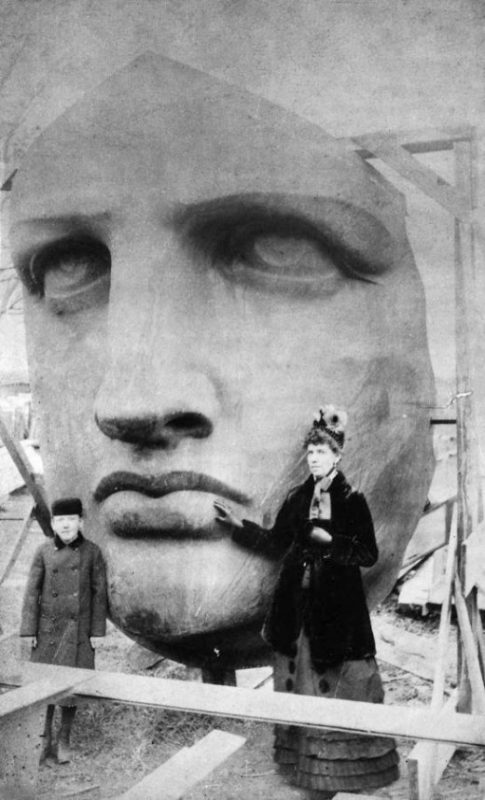 Unpacking the head of the Statue of Liberty, New York. Courtesy of Wikimedida Commons.

On board the S/S Pereire, Bartholdi approached New York with an anticipation that he had rarely felt before: ferries crossed the harbor like “colossal flies” and yachts glided “over the surface of the water … like marchionesses with their long trains.” Bartholdi grabbed his notebook and sketched a version of his statue as a sort of Venus springing from the water—a strange Venus, indeed, with her arm stretched high like a colossal mast and her tunic pulled by the wind like a sail. Later to his mother, he described Bedloe’s Island, today known as Liberty Island, in deeply religious terms. It was, he said, the virtual point of convergence of the East and Hudson Rivers, dividing New York into three parts (Manhattan, New Jersey, and Brooklyn) as if “to explain the mystery of Trinity.” He marked Bedloe’s Island with a bright red spot on his map.

Ashore, the heat was intolerable, the city almost deserted. The few businessmen Bartholdi met there gave him the cold shoulder because, as he put it, they had “little enthusiasm for anything but themselves and the almighty dollar.” His meetings in the region were disappointing, sometimes even embarrassing. New York intellectuals bored him.

Bartholdi eventually visited Long Branch, New Jersey, and the summer home of President Ulysses S. Grant. In Long Branch, Bartholdi found himself in the middle of a beach crowded with swimmers, where he was the only one wearing a French swimsuit that, he realized too late, was “too skimpy” for the occasion. Later, when the toy importer Richard Butler invited Bartholdi to his New York mansion, he held forth about “religion, high principle, and so on” for hours on end, never offering the artist anything to eat. To his mother, Bartholdi wrote that the United States reminded him of “the principles you inculcated in me”—that is, moral austerity.

That was truer in some cities than in others. Bartholdi arrived in Boston on Sunday, June 29, on a brand-new Pullman train car, to the city deserted—“not a sound to be heard, not a person to be seen.” Seemingly, the living had all gone to church. Soon, Bartholdi visited the nearby city of Plymouth, where the sculptor Charles Hammatt Billings was gathering funds to build a monument commemorating the Pilgrims, the National Monument to the Forefathers: a gigantic, elegant woman, dressed in classical attire, holding the Bible with her left hand and pointing to the sky with her right. Bartholdi did not mention this visit to his mother, perhaps because he was too proud to admit that someone else had a plan so similar to his own. In any case, Bartholdi may have borrowed from the Plymouth project, which was completed in 1889, to transform his Egyptian fellah into a book-carrying Puritan icon.

Increasingly, however, Bartholdi began to appreciate a wilder side of the country. Venturing from Niagara Falls to the Great Lakes, he arrived in Chicago, where he saw “a combination of movement” that he had not yet seen in America, “maritime, terrestrial, pedestrian, and, I could say, subterranean.” Next, he travelled to Omaha, where he saw a woman undress and remove her “mountains of fake hair” behind only a gauzy curtain. He saw an untamed landscape “plunge into valleys and gorges” in the Rocky Mountains—“diabolical, something out of a fairy tale.” In San Francisco, he marveled at the sight of Asian prostitutes waiting under dim lanterns. From his diaries and letters, it is clear that these picaresque aspects of America dramatically impressed him. He was taken with the boldness of the American character and landscape, and its brazen search for the new. 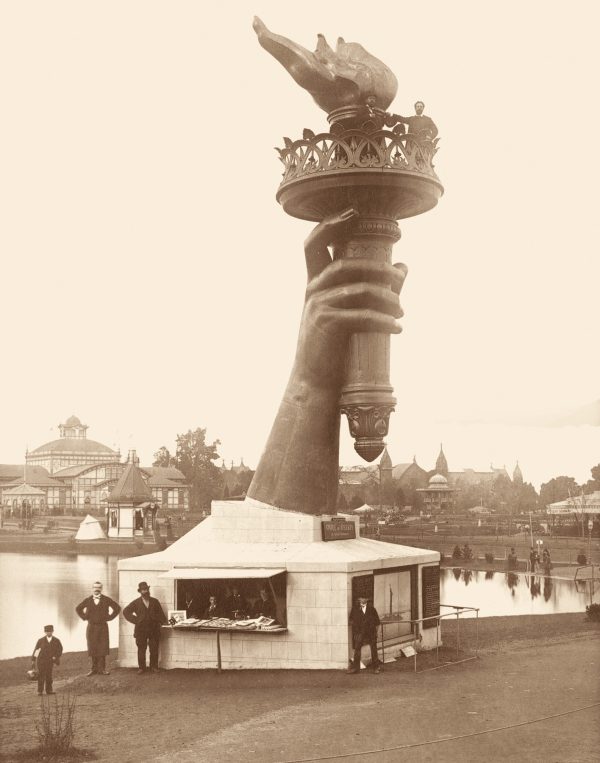 America, Bartholdi once observed during his travels, was “an adorable lady chewing tobacco,” a beautiful woman with poor manners or, perhaps, a pretty lass made more charming by her coarse behavior. He commented, with admiration, that the citizens of the United States were the “ultimate oseurs”—daring people, always defying common sense in the pursuit of innovation. “Sometimes they get it wrong, like all those who look for something, but among the infinite numbers of their efforts, there are always some that honor the spirit of invention.”

Bartholdi, too, was an oseur. His statue—colossal and metallic like the American technological inventions he so admired, looking like a ship sailing toward Europe, copper-red like the Rocky Mountains, carrying the revolutionary Declaration of Independence rather than the Bible—was hardly “proper.” Yes, she managed to convey the rigor and puritanism of the sculptor’s contacts in Boston and New York, those upright churchgoers who reminded him of his strict mother. For them (and for Charlotte), Bartholdi gave his statue the posture, draped tunic, and thorny crown of the early Renaissance saints or Christs he had learned to paint and sculpt in Scheffer’s atelier.

But then Bartholdi added a ruder twist to the statue’s pious look. Rather than making her appearance graceful, like that of the pure and devout figure standing at the center of Billing’s Monument to the Forefathers, Bartholdi sculpted a frown on his statue’s face, emphasized her masculine features, and wrapped her in a red copper mantle (long since weathered to green), which was meant to evoke the “devilish” landscapes that seduced Bartholdi in the West. The statue is, indeed, Eastern and Western, feminine and masculine, pious and devilish, adorable and rough, motherly yet ready for war. She may be promising vengeance in the name of the downtrodden, or she could be a sentinel holding the line.

But who knows? Perhaps, jaws tense and face straight, she may just be chewing tobacco.

Francesca Lidia Viano is a fellow at the Weatherhead Center for International Affairs at Harvard University. She is the author of Sentinel: The Unlikely Origins of the Statue of Liberty.