Elinor Powell (right) with a fellow nurse at POW Camp Florence in Arizona, circa 1944-1945. Photo courtesy of Chris Albert.

On the summer afternoon in 1944 that 23-year-old Elinor Powell walked into the Woolworth’s lunch counter in downtown Phoenix, it never occurred to her that she would be refused service. She was, after all, an officer in the U.S. Army Nurse Corps, serving her country during wartime, and she had grown up in a predominantly white, upwardly mobile Boston suburb that didn’t subject her family to discrimination.

But the waiter who turned Elinor away wasn’t moved by her patriotism. All he saw was her brown skin. It probably never occurred to him that the woman in uniform was from a family that served its country, as Elinor’s father had in the First World War, as well as another relative who had been part of the Union Army during the Civil War. The only thing that counted at that moment—and in that place, where Jim Crow laws remained in force—was the waiter’s perception of a black army nurse as not standing on equal footing with his white customers.

Infuriated and humiliated, Elinor left Woolworth’s and returned to POW Camp Florence, in the Arizona desert. She was stationed there to look after German prisoners of war, who had been captured in Europe and Northern Africa and then sent across the Atlantic Ocean, for detainment in the United States during World War II.

Elinor, like many other black nurses in the Army Nurse Corps, was tasked with caring for German POWs—men who represented Hitler’s racist regime of white supremacy. Though their presence is rarely discussed in American history, from 1942 to 1946, there were 371,683 German POWs scattered across the country in more than 600 camps. Some POWs remained until 1948.

And these POWs were kept busy. Prisoners of war, under rules set by the Geneva Convention, could be made to work for the detaining power. And, with millions of American men away serving in the military, there was a significant labor shortage in the United States. Farms, plants, canneries, and other industries needed workers.

For black nurses, the assignment to take care of German POWs—to tend to Nazis—was deeply unwelcome. To the African-American women who had endured the arduous process of being admitted into the U.S. Army Nurse Corps, this assignment felt like a betrayal. They volunteered to serve to help wounded American soldiers, not the enemy.

Long before World War II, black nurses had been struggling to serve their country. After the United States declared war on Germany in 1917, black nurses tried to enroll in the Red Cross, which was then the procurement agency for the Army Nurse Corps. The Red Cross rejected them, because they didn’t have the required membership in the American Nurses Association (ANA), which didn’t allow blacks to join at the time. A few black nurses eventually served in the First World War, but not because they were finally admitted into the Army Nurse Corps. The 1918 flu epidemic wiped out so many thousands of people that a handful of black nurses were called to assist.

More than two decades later, after Hitler invaded Poland, the United States began an aggressive war preparedness program, and the Army Nurse Corps expanded its recruiting process. Wanting to serve their country and receive a steady military income, thousands of black nurses filled out applications to enlist. They received the following letter:

“Your application to the Army Nurse Corps cannot be given favorable consideration as there are no provisions in Army regulations for the appointment of colored nurses in the Corps.”

The rejection letter was a crushing blow, but also an honest appraisal of how the country regarded black nurses: They weren’t valued as American citizens or seen as fit to wear a military uniform.

The National Association of Colored Graduate Nurses, (NACGN)—an organization founded in 1908 for black registered nurses as an alternative to the ANA, which still hadn’t extended its membership to black nurses—challenged the letter. And with political pressure from civil rights groups and the black press, 56 black nurses were finally admitted into the U.S. Army Nurse Corps in 1941. Some went to Fort Livingston in Louisiana and others to Fort Bragg, in North Carolina, both segregated bases.

When Elinor Powell entered the army in 1944, she completed her basic training an hour outside of Tucson, Arizona, at Fort Huachuca, which had become the largest military installation for black soldiers and nurses. The army had a strict quota for black nurses, and only 300 of them served in the entire Army Nurse Corps, which had 40,000 white nurses. It was evident the military didn’t really want black women to serve at all, and they made this clear. 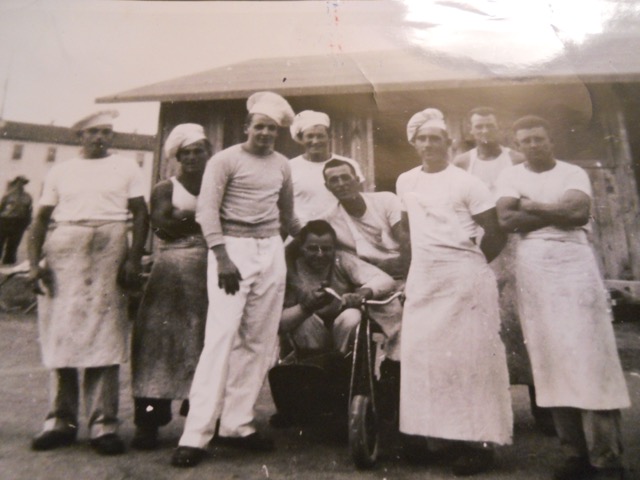 Elinor’s cohort of newly trained Army nurses soon received shocking news: There had been too much fraternization between white nurses and German POWs at Camp Florence. So the Army was bringing in black nurses as replacements.

POW camps would become an ongoing assignment for the majority of African-American nurses. The remainder were stationed at segregated bases with black soldiers, who mostly performed maintenance and menial jobs during the war, and understood what it meant to wear a U.S. military uniform and still be treated like a second-class citizen.

Life for a black army nurse at a POW camp could be lonely and isolated. The camps in the South and Southwest, in particular, strictly enforced Jim Crow. The list of complaints from black nurses included being routinely left out of officer meetings and social functions, and being forced to eat in segregated dining halls. The trips to nearby towns were also degrading because of establishments that either relegated blacks to subpar seating and service or barred them from entering altogether.

At the hospitals in the POW camps, black nurses weren’t that fulfilled either. A great many of the prisoners were in good health, which had been a requirement to make the trans-Atlantic journey in the first place, so the black nurses weren’t utilized to full capacity. There were typical bedside nursing duties and occasional appendectomies performed, but rarely were there critical cases.

In some ways, from a social standpoint, the German POWs fared better than the black nurses. Local white residents, U.S. Army guards and officers were friendly toward them—a level of respect that black laborers, soldiers, and nurses did not experience with any regularity.

When German prisoners first arrived in the United States, many were shocked by the racial hierarchy entrenched in American culture. They saw the segregated bathrooms and restricted dining halls at train stations, and during their days-long journeys to their respective POW camps had black train attendants bringing them food and drinks and calling them “sir.” It was clear that in the United States, there was an inherent expectation of subservience to whites, even to those from Hitler’s army.

Once at camp, life for German POWs, for the most part, was comfortable. From the clean accommodations and regular meals, to the congeniality of Americans, some POWs were relieved to have been captured. And the interactions with black nurses were largely civilized.

But there were occasions when black nurses found themselves humiliated by German POWs and not backed up by the U.S. Army. At Camp Papago Park, outside of Phoenix, a German POW said he hated “niggers” in front of a black nurse. She reported the incident to the commanding officer, expecting a swift reprimand. The nurse later discovered the commanding officer didn’t think any punishment was necessary. She complained about the incident in a letter to the National Association of Colored Graduate Nurses:

“That is the worst insult an army officer should ever have to take. I think it is insult enough to be here taking care of them when we volunteered to come into the army to nurse military personnel…All of this is making us very bitter.”

Meanwhile, even though black nurses were underutilized, there was an urgent need for more nurses to care for the returning American soldiers, wounded in battle. Nevertheless, white nurses were tasked to tend to Americans almost exclusively. Yes, thousands of white nurses also had POW camp assignments—there were very few black women in Army Nurse Corps. But if a black unit could replace a white one at a camp, the swap was made.

As the war entered its final year, the numbers of wounded men rose exponentially. President Roosevelt made the alarming announcement of legislation to establish a nursing draft in his State of the Union Address on January 6, 1945. Radio announcements said the draft would be instituted unless 18,000 additional nurses volunteered.

At the time of the president’s address, there were 9,000 applications from black nurses hoping to enlist in the Army Nurse Corps. But those nurses didn’t count toward the goal, or dissuade FDR’s announcement—to the dismay of NACGN, the black press and civil rights organizations.

Congressman Adam Clayton Powell Jr., the esteemed minister from Harlem, famously denounced the decision: “It is absolutely unbelievable that in times like these, when the world is going forward, that there are leaders in our American life who are going backward. It is further unbelievable that these leaders have become so blindly and unreasonably un-American that they have forced our wounded men to face the tragedy of death rather than allow trained nurses to aid because these nurses’ skins happen to be of a different color.” 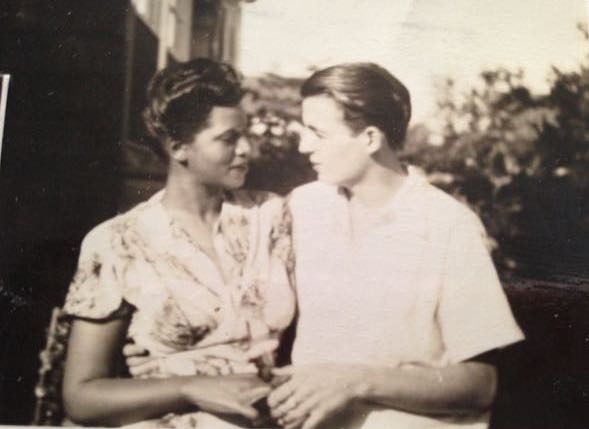 The draft legislation stalled in the Senate and the conscription of nurses never occurred. But with morale among black army nurses reaching record lows, the NACGN approached First Lady Eleanor Roosevelt for help, given her commitment to equal rights. And the meeting was a success.

In the final year of the war, black nurses were no longer assigned exclusively to POW camps. After a few months they were transferred to army hospitals for wounded American soldiers.

Elinor remained at POW Camp Florence for the duration of the war, and fell in love with a German prisoner, Frederick Albert. While fellow Americans humiliated her with segregation, a German, of all people, uplifted her. The two shunned the racist policies of Jim Crow and Nazism, seeking solace in a forbidden romance. They would spend their lives together in constant search of a community that accepted them, more than 20 years before laws banning interracial marriage were struck down in the 1967 Loving v. Virginia decision.

By war’s end, only about 500 black nurses had served in the U.S. Army Nurse Corps during WWII, even though thousands had applied. Despite the discrimination they faced, black army nurses demonstrated a persistent will to be a part of the U.S. Army Nurse Corp and serve their country. Their efforts paid off when President Truman issued an executive order to desegregate the entire military in 1948.

And by 1951, the National Association of Colored Graduate Nurses dissolved into the American Nurses Association, which had extended its membership to all nurses regardless of race.

Alexis Clark is a freelance journalist and author of Enemies in Love: A German POW, A Black Nurse, and an Unlikely Romance.