Turning on the TV in Los Angeles in 1949, you might have come face-to-face with a young man in a jeweled turban with a dreamy gaze accentuated by dark eye shadow. Dressed in a fashionable coat and tie, Korla Pandit played the piano and the organ—sometimes both at once—creating music that was both familiar and exotic.

According to press releases from the time, Pandit was born in New Delhi, India, the son of a Brahmin government worker and a French opera singer. A prodigy on the piano, he studied music in England and later moved to the United States, where he mastered the organ at the University of Chicago. Not once in 900 performances did he speak on camera, preferring instead to communicate with viewers via that hypnotic gaze.

He became one of the first TV stars, ever, with friends like Errol Flynn, Bob Hope, and Sabu, the Elephant Boy. He eventually ceded his TV performances over a contract dispute to the young pianist Liberace. And the way he came to fame is one of those only-in-America fables where the audience and the performer are both invested in the illusion.

I first got to know Korla Pandit in 1990, while I was working at KGO TV in San Francisco. I was producing a series on Bay Area eccentrics and a colleague at the station mentioned that Pandit had a live show on KGO in the ’50s.

I tracked Pandit down to a private residence in the Napa Valley, where I was greeted by a man who appeared much shorter than the pianist I’d seen on faded television clips. He was elegantly dressed in a grey Nehru jacket, a turban, and highly polished shoes. As he spoke to me in a soft but high-pitched voice, Korla regaled me with stories of India, Hollywood, and sold-out concerts, cleverly salted with “Indian pearls of wisdom.” He told me that in India a song never dies but materializes into beautiful forms and that he had played at the funeral of his famous friend Paramahansa Yogananda. I had no reason to doubt his integrity or question his philosophy. He seemed like a gentle soul.

Although his face was sunken and his gaze less alluring, he was able to take me back in time, much like the character Norma Desmond in Sunset Boulevard. After we got the necessary footage of him playing the organ and a great shot of him walking off into the sunset, we left, promising to stay in contact.

When the piece ran a few days later on the evening news, Pandit called me at work to say that he was happy to reconnect with his Channel 7 fans. He continued to call me every four months or so for the next seven years. We usually talked about the clubs he was playing at in Los Angeles. He told me he had a new audience of tiki hipsters who canonized him by calling him the “godfather of exotica music.” And he told me about his cameo appearance in Tim Burton’s film about cult film director Ed Wood.

When he called, I’d pick up the phone and hear a woman’s secretarial voice asking me if this was Mr. Turner. Then she’d say “Korla Pandit would love to talk to you.” After an acknowledgment, the line was usually quiet for 15 to 20 seconds until he came on with his familiar greeting of “Namaste, John.” It was straight out of a ’50s noir film.

In 1996, he invited me to attend a San Francisco concert held at Bimbos 365, an atmospheric club with ’50s-style booth seating. This was the only time I got to see him perform before an audience and boy, was he great. He played songs from his 29 albums. The crowd was on their feet for the whole performance.

In October of 1998, a viewer called the station to say that Pandit, age 77, had died that day at a hospital in Petaluma, California, of heart failure. We showed 20 seconds of him playing at his height in the ’50s, as well as something from the interview. I thought that closed the chapter on Korla Pandit. It didn’t.

In June of 2001, a friend sent me a story in Los Angeles Magazine written by R.J. Smith called “The Many Faces of Korla Pandit.” I started reading the article with excitement, which was soon followed by a clouded curiosity and later capped with a disclosure that shook what I knew about him (which apparently wasn’t that much because the name he was born with was John Roland Redd). I shared the article with a fellow KGO producer, Eric Christensen, who grew up in San Francisco and remembered his mother saying she was mesmerized by Pandit’s eyes, which seemed to see right through her.

We agreed that Pandit’s true story was astonishing, tragic, and yet illuminating—the foundation for a movie and a true American archetype of self-invention. Unbeknownst to the rest of us, he had actually been one of the first African-American television stars. Twelve years later, when we were both retired, Eric and I decided to use our pensions and social security to make that movie.

We started by filming Smith, the author of the magazine piece, who had known Pandit in the early ’90s. Only years later, as he was interviewing musicians for a book on L.A.’s great African-American music clubs in the ’40s, did Smith begin to uncover Pandit’s true history. When Smith complimented a piano player of note, Sir Charles Thompson, Thompson said offhandedly that while he thought he was a decent piano player, there was another musician from Columbia, Missouri, who was much better, a fellow named John Redd. He went on to say that when he was working in L.A., he turned on the television and lo and behold, there was John Roland Redd, running over the keys while wearing a turban and going under the Indian name of Korla Pandit. Well, this was a real shocker to Smith, and of course to us.

Smith confirmed that Pandit was indeed John Roland Redd, one of seven children born to Baptist pastor Ernest Redd and Doshia O’Nina Johnson, in Columbia, Missouri. His love of music took hold in childhood and he played a mean boogie-woogie piano. Smith learned that Frances, one of Redd’s sisters, had preceded him to Hollywood, where she found work as an actress on an all-black film called Midnight Shadow in which a shifty villain wore a turban. When he first came to L.A., Redd changed his name to Juan Rolando, because at that time, Mexican music was in vogue and Mexican musicians had an easier time then African-Americans getting studio and club work.

Frances had a white roommate who was a Disney artist named Beryl DeBeeson, whom she set up on a date with her brother. Their relationship eventually led to a Tijuana marriage, as interracial marriages were illegal in California at that time. Beryl helped John become Korla Pandit, doing his eye makeup and designing his sets and wardrobe. 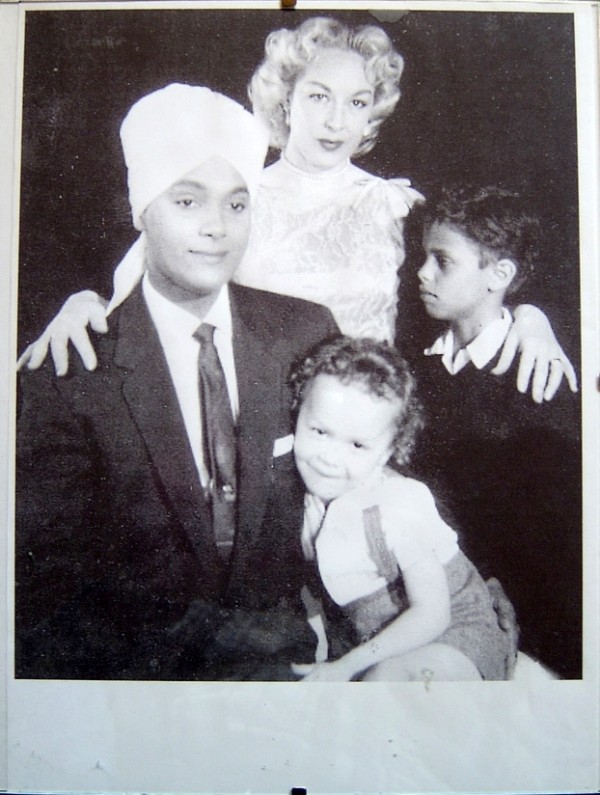 Korla Pandit with his wife and children.

One of Redd’s childhood friends filled us in on what life was like for African-Americans living in Columbia in the ’30s. There wasn’t much mingling between the races, as Jim Crow laws were in effect. Blacks weren’t served at the soda fountain and if you wanted to buy clothes at the department store, you couldn’t even try them on. A nephew told us that John was asked to play the piano before the local chapter of the KKK. He also recounted a humorous story about Redd hypnotizing a fellow grade school student for fun. Redd’s childhood friend felt that John’s move to California, after graduating from high school, only helped him.

We asked our interview subjects if John’s version of passing or reinvention was dishonest. Almost all responded that he did what he had to do to navigate the existing racism in the U.S. This overall sense of approval seemed to ring true because while many of the members of his father’s congregation knew of his transformation from John to Korla—as did numerous musicians—no one outed him. He was able to take his secret with him to his grave.

Hollywood was also kind to shape shifters who’d invented their biographies. And Pandit and his wife understood that Americans knew very little of India outside of the magical rope-climbing swamis or men-of-mystery they saw in the movies. With their sets and music, they created an exotic escape in people’s living rooms. Female fans of Pandit have told us that he was their first teenage crush. He was an image that came through their TV screens that they could safely fantasize about.

Korla Pandit understood—far more than anyone realized—that what we saw on TV wasn’t real, but it could be a whole new kind of reality.

has curated numerous shows on folk and outsider art and has written a biography on the self-taught artist, Howard Finster. For more information about the documentary Korla, visit korlathemovie.com or korlathemovie on Facebook.