From today’s vantage point, when many American cities struggle to sustain even a single print newspaper, the early decades of the 20th century look like glory days for local papers. Even small cities boasted two or three dailies. Larger cities might issue more than a dozen apiece. “City desks” hummed with activity, as reporters worked up stories on the regular local beats: crime, politics, schools, society, sports. Many papers built lavish headquarters buildings that became signatures of the skyline, from Philadelphia’s Inquirer Building to Oakland’s Tribune Tower.

Yet to refer to any 20th-century daily paper as a “local paper” hides an important truth: the proportion of newspaper content that was written, designed, and printed locally decreased in the early 20th century. Aided by a new technology called the stereotype, syndicates began to sell the same articles and illustrations to hundreds of different newspapers around the country. Meanwhile, publishers like William Randolph Hearst and E. W. Scripps bought up multiple papers to form chains, which shared content among themselves.

The rise of a telegraph network, in the middle of the 19th century, first enabled companies to sell content to multiple papers. Wire services such as the Associated Press offered breaking news by telegraph, with the understanding that editors would cut, embellish, or otherwise alter the text for their own pages.

When it came to entertainment, 19th-century newspaper editors had simply reprinted material they found elsewhere, running jokes from magazines or serializing entire novels. But by the early 20th century, a series of copyright lawsuits had ended the era of free material and created an opening for companies, called feature syndicates, that offered entertaining articles at an affordable price.

Feature syndicates commissioned articles and fiction from well-known authors such as Jack London, Frederick Douglass, and John Muir, and required that all papers purchasing the stories print them on the same date, so all could claim to be printing “fresh” or “first run” material. Receiving stories by telegraph or via paper “proofs” spared local publishers the trouble of hiring writers and reporters for all of the material that filled their pages.

But the system still required a lot of labor from local papers. Workers at each paper would set casts of the type into columns using a linotype machine, and from those casts another set of workers would fabricate a metal printing plate. Eventually syndicates began providing thin metal stereotype plates, or the lightweight casts used to make them, called matrices, which let publishers skip the typesetting process altogether. Using prepared stereotypes also allowed syndicates to sell illustrations, setting the stage for one of their top sellers: the comic strip. 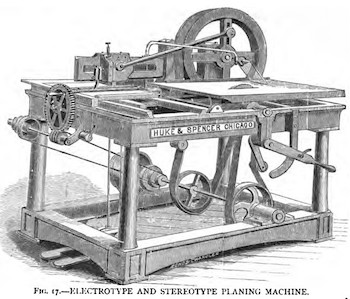 Business boomed. In 1913, there were 40 syndicates in operation; by 1931, there were more than 160. Some were small and specialized, offering only science articles or fiction; others sold a full array of features to thousands of newspapers. Local editors ordered syndicated features out of catalogs, choosing their paper’s sports column, women’s page, cooking feature, children’s page, and comic strips. Some purchased their paper’s entire Sunday magazine from a syndicate.

The same printing technologies—stereotype plates and matrices—drove the expansion of newspaper chains in the early 20th century. Once multiple papers could share material efficiently, the benefits of chain ownership multiplied, and so did chains themselves. By 1930 there were 59 different newspaper chains operating in the U.S. The Hearst chain owned 23 daily papers; the Scripps-Howard chain had grown to 25. Many chains ran their own feature syndicates, and would sell their material to any non-competitor newspaper.

So, by the 1920s, most of the articles that Americans read in their local papers had been bought, sold, or shared on the national news market. These articles had tremendous appeal. Syndicates that sold Sunday magazines or “rotogravure” photo sections offered higher-quality images than most independent papers could produce. Syndicates also enriched many papers’ international coverage. While local papers could buy breaking news from wire services (or send their own reporters), feature syndicates provided detailed illustrated articles on topics like politics in the Balkans, archaeology in Egypt, or diamond mining in Brazil.

When sociologists Robert and Helen Lynd studied the town of Muncie, Indiana, they found that everyone read and talked about Dorothy Dix’s advice columns; ministers even used her words as the basis for their sermons. During a 1945 strike in which New York news carriers refused to deliver for 17 days, a team of researchers asked New Yorkers what they most missed about the news. Very few could name a specific news story that they wanted to follow; instead they named features—mostly syndicated—that they missed.

The Milwaukee Sentinel bought a comic strip from the New York World syndicate in 1918, for example, but retitled it “Somewhere in Milwaukee.” The same paper told readers to send in their letters for Dorothy Dix as though she could be reached in Milwaukee, and not in New York City, where she lived and sold her work to the Ledger syndicate.

The average American reader didn’t necessarily notice the way syndicates and chains had come to dominate the news. Syndicates were careful to sell their material to only one newspaper per city. While syndicated features usually carried a small copyright symbol, the name that followed that symbol could be deliberately opaque. Readers wouldn’t automatically know that “King Features” denoted Hearst material, or that “NEA” indicated content from the Scripps chain. Local papers sometimes purposely disguised syndicated material. The Milwaukee Sentinel bought a comic strip from the New York World syndicate in 1918, for example, but retitled it “Somewhere in Milwaukee.” The same paper told readers to send in their letters for Dorothy Dix as though she could be reached in Milwaukee, and not in New York City, where she lived and sold her work to the Ledger syndicate.

Journalists, on the other hand, definitely noticed the growing power of syndicates and chains—and many were not happy about it. H. L. Mencken lamented that newspapers “now clump into miserable chains, like filling-stations and grocery-stores” and no longer cultivated hard-hitting local journalism. Syndicates could turn successful writers into national celebrities, but they ultimately cut down the total number of journalists, since one writer could provide the sports column for a hundred papers. While syndicated writers could potentially work from anywhere, in actuality this new system concentrated the profession into just a few cities: New York, Washington D.C., and Chicago. Formerly robust journalism scenes in other cities—San Francisco, Cleveland, Buffalo, Denver—withered.

Journalists worried, too, that syndicated news catered to the lowest common denominator. Syndicate managers urged their writers to stick to proven topics: mystery, romance, adventure, children, and animals. Writers purposely crafted placeless and politically bland features that could be sold to any newspaper, anywhere in the country. Within the industry, syndicated material was often referred to as “canned news” or even “canned junk.” Journalist Will Irwin, who wrote a series of exposés on the newspaper business for Collier’s Weekly, thought all of this amounted to newspapers full of “triviality—too much frosting and too little cake.” Irwin wondered whether standardized news might ultimately create a standardized culture, writing in 1924:

“Traveling across the continent, you have the impression that you have seen morning after morning and evening after evening all the way only the same newspaper, merely in cheaper or more expensive form. Continued over a generation this process must work to unify the national psychology—to make the next generation—East, South, West, and North—think and feel alike.”

Ultimately, syndicated news did not create the entirely homogenous nation that Irwin predicted—but it did have long-lasting impacts on American life. Like other mass media that boomed around the same time—radio, movies, monthly magazines—syndicated news diverted people’s energies and attention from local culture with alluring, slickly-produced entertainment. And like those other media, newspapers became a conduit for a shared commercial culture.

When they opened up their papers, Americans laughed at the same jokes, read the same advice, and learned the same vocabularies. Americans began to talk about “keeping up with the Joneses,” using the title of a successful syndicated comic strip about a family obsessed with appearing as prosperous and happy as the neighbors. Readers followed the antics of Buster Brown in his weekly comic strip, and then purchased the children’s shoes named after the character. Through syndicated columns that sold mail-order patterns, newspaper readers around the country built the same houses and sewed the same dresses.

Pressure from syndicates was especially tough on the foreign-language press. At the turn of the century, American cities published daily newspapers in German, Yiddish, Spanish, Chinese, and Polish, among other languages. But incorporating syndicated material proved awkward or impossible for these papers, who couldn’t translate the dialogue in a syndicated comic strip or the text in an illustrated beauty column, since the words were forged right into the ready-to-print stereotype plate. The absence of colorful, mass-appeal syndicated content became one more element pushing second- and third-generation immigrants away from the foreign-language press and towards English-language dailies.

In fact, immigrants and people of color were hard to find in syndicated material at all, apart from offensive caricatures in humor sections. As the American population diversified through massive immigration and black migration out of the South, syndicates and chains churned out features that reflected only white, middle-class norms, and made caricatures of all other populations.

We still call these caricatures “stereotypes.”

Julia Guarneri is a historian at the University of Cambridge and the author of Newsprint Metropolis: City Papers and the Making of Modern Americans.