One hundred years ago last May, President Woodrow Wilson signed the first congressional resolution and presidential proclamation calling upon all citizens to display the national flag in honor of American mothers on the second Sunday in May. But the credit for Mother’s Day’s popularity belongs to Anna Jarvis, who organized the first official Mother’s Day services on the morning of May 10, 1908, in her hometown of Grafton, West Virginia, and later in the afternoon in her adopted hometown of Philadelphia. Thanks to Jarvis—who wrote annually to every state governor as well as to any local or national figure she believed could advance her holiday movement, from former President Theodore Roosevelt to the humorist Mark Twain—most states already hosted a Mother’s Day observance well before Wilson gave the holiday federal recognition.

The holiday may have had an easy birth, but not an easy transition to maturity.

Anna Jarvis designed the Mother’s Day celebration in honor of her own mother, Ann Reeves Jarvis. As a young girl, she was inspired by a prayer she once overhead her mother give. “I hope and pray that someone, sometime, will found a memorial mother’s day commemorating her for the matchless service she renders to humanity in every field of life,” Jarvis remembered her mother saying. “She is entitled to it.” Jarvis chose the second Sunday in May to mark the anniversary of her mother’s death and selected Mrs. Jarvis’ favorite flower, the white carnation, as the holiday’s official emblem. Jarvis’ request for children to visit or write letters home on Mother’s Day reflected the significance she placed on her own correspondence with her mother.

As a single woman in her 40s, Jarvis viewed motherhood simply through the eyes of a daughter. Thus she constructed a child-centered celebration of motherhood for Mother’s Day: a “thank-offering” from sons and daughters and the nation “for the blessing of good homes.” “This is not a celebration of maudlin sentiment. It is one of practical benefit and patriotism, emphasizing the home as the highest inspiration of our individual and national lives.”

Commercial industries quickly recognized the marketability in Jarvis’ sentimental celebration of motherhood. Her themes became central to Mother’s Day advertising campaigns. The call to write tribute letters fueled the greeting card industry. The designation of the white carnation emblem energized the floral industry. Moreover, Jarvis’ own story as a daughter dedicated to fulfilling her departed mother’s greatest wish was better than anything a copywriter could invent. 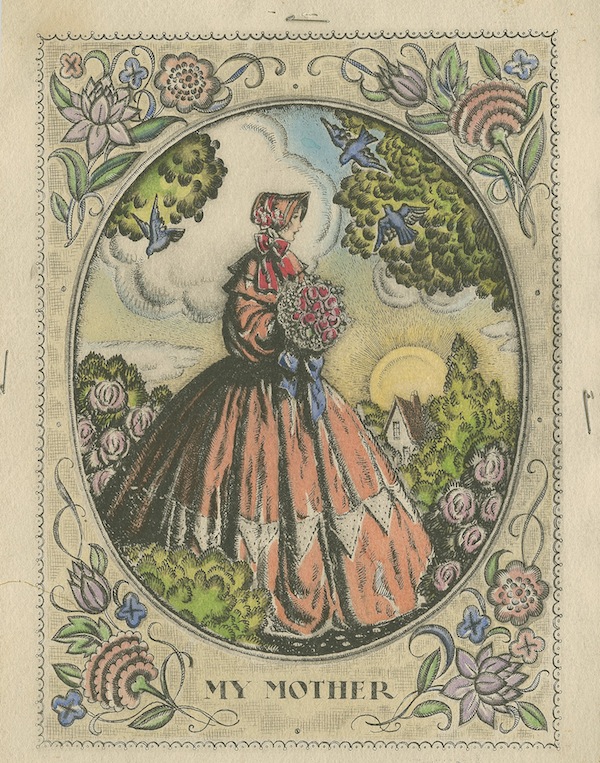 A Mother’s Day card from 1930, with an illustration of a woman dressed in 1860s-era fashion.

But despite her calls to the nation to adopt her holiday, Jarvis considered it her intellectual and legal property, and not part of the public domain. She wished for Mother’s Day to remain a “holy day,” to remind us of our neglect of “the mother of quiet grace” who put the needs of her children before her own. She never intended for the observance to become the “burdensome, wasteful, expensive gift-day” that other holidays had become by the early 20th century.

Jarvis’ attacks on the commercialization of Mother’s Day became legendary. Media sources chronicled her frequent public condemnations of those she denounced as copyright infringers, trade vandals, and blatant profiteers. In 1922, Jarvis endorsed an open boycott against the florists who raised the price of white carnations every May. The following year, she crashed a retail confectioner convention to protest the industry’s economic gouging of the day. In 1925, she interrupted a national convention of the American War Mothers in Philadelphia because she believed the majority of the money raised by the organization’s white carnation sales went into the pockets of professional organizers rather than going to aid World War I veterans.

Jarvis identified several diverse threats to her holiday movement throughout her career. But the biggest was another holiday: a more inclusive Parents’ Day. In 1923, New York City philanthropist Robert Spero attempted to organize a large Mother’s Day celebration, complete with a parade of marching bands and singing troops of Boy Scouts and Girl Scouts. Jarvis, however, would not permit it.

Jarvis had battled with Spero before over his role in the profitable marketing of artificial white carnations. Now she accused him of falsely claiming affiliation with her incorporated Mother’s Day International Association for sheer self-promotion. She threatened a lawsuit, and New York Governor Alfred Smith, who had originally supported the idea, successfully pressured Spero to cancel his entire holiday plans.

In 1924, Spero sponsored his first Parents’ Day celebration on the second Sunday in May. His rallies earned more holiday converts and media attention as the decade progressed. “We want fathers to feel they are more than breadwinners, that when they go off to work they have some responsibility for what goes on in the home,” Spero told The New York Times in 1926. That same year, a crowd of 4,000 attended the Parents’ Day rally in the Bronx. The holiday movement gained momentum with the 1929 official endorsement of Parents magazine publisher George Hecht. And in 1930, New York Assemblyman Julius Berg introduced a bill in Albany to legally replace Mother’s Day with Parents’ Day on the state calendar. He was confident that New York State mothers would have no complaints about sharing their day with fathers.

But Jarvis complained, vehemently. Not only did she consider the bill a personal attack on her legal copyright protection; she saw it as a patent insult to the state’s mothers. “Of all the freak and amazing attacks on the home and respected womanhood of New York State, surely this anti-mother bill sponsored by a little clique of anti- mother sons is a humiliating one,” she protested. For Jarvis, a threat to Mother’s Day was an affront to motherhood and, in turn, to family harmony. Although often criticized by her more feminist contemporaries, as well as modern scholars, for her failure to acknowledge mothers who were active in the era’s social and political reform movements, Jarvis never faltered from her defense of a mother’s preeminent role within the family.

Jarvis was not alone in her criticism of the Parents’ Day movement and its perceived attack on the veneration of motherhood. The state and national success that Spero predicted for his holiday never materialized. His annual rallies were never as well attended as predicted. Berg’s bill failed repeatedly in Albany. And even Hecht abandoned the holiday movement in 1941 to chair the newly incorporated National Committee on the Observance of Mother’s Day.

The holiday rivalry, at its heart, was a societal dispute over the shifting roles of fathers and mothers within the early-20th-century American family. Child care advice and popular culture encouraged fathers to play an active role in the daily lives of their children by the 1930s, calling fatherhood the most important occupation a man could hold. Yet despite the new views on fatherhood, Spero still failed to kick the mother out of Mother’s Day. Perhaps the holiday’s lack of broad appeal mirrored the larger cultural recognition of the unequal division of child care—that when contemporary child care experts or social pundits addressed “parents,” they were still really addressing mothers. Although many Americans certainly believed that fathers deserved regard beyond that of breadwinner, most hesitated to equate the maternal and paternal roles. Like Jarvis, they may have viewed a mother’s influence as irreplaceable and thus incomparable to a father’s role in design or status. Ultimately, Americans opted to honor fathers in a way that did not threaten the status of mothers or marginalize their role as children’s primary care takers. As the Parents’ Day movement faded in the 1940s, the celebration of Father’s Day grew in popularity.

On a national calendar already crowded with tributes to American fathers—from Presidents’ Day to our “pilgrim fathers” on Thanksgiving—Mother’s Day is the only culturally, commercially popular holiday that explicitly celebrates women. And that explains Jarvis’ protectiveness: “When a son or daughter cannot endure the name ‘mother’ for a single day of the year it would seem there is something wrong,” she implored. “One day out of all the ages, and one day out of all the year to bear the name ‘mother’ is surely not too much for her.” Based on the cultural longevity of Mother’s Day, Americans agree.

is an assistant professor of history and gender studies at West Virginia Wesleyan College. She is the author of Memorializing Motherhood: Anna Jarvis and the Struggle for the Control of Mother’s Day.