The clock tower at Cornell University, where anatomist Burt Green Wilder made his mark as an upholder of old-fashioned values. Courtesy of Wikimedia Commons.

Many faculty members objected to the holiday, but few were as visible and vocal as professor Burt Green Wilder, who would go on to become a defining, if little-known, figure in American higher education.

Spring Day built upon a relatively new tradition: During the 1890s students began holding a dance and fundraiser, the Navy Ball, prior to major fall regattas. Not surprisingly, on the day of the regatta, class attendance was low. But attendance became even more abysmal in 1901, when the students moved the Navy Ball to March and reorganized it as a “circus parade” and noontime concert to benefit the Cornell Athletic Association. Faced with almost no students in classes, the administration capitulated and declared Spring Day a holiday. But Wilder, a pioneering physician, anatomist, and natural historian, hated it—for reasons that turned out to be prescient.

Hired in 1867 as one of Cornell’s original professors, Wilder was a man of 19th-century values but 20th-century sensibilities. Whenever the Spring Day festivities took place in front of McGraw Hall, where his office was, he made clear his feelings about the concession, by writing his disapproval in five languages on a large blackboard, according to the Ithaca Journal-News. He began in French, “O athletique, que de folies on commet et ton nom,” and continued in English and Latin—“In an individual folly may be merely a fault; in a university it is a crime. From fake show to fake scholarship facilis descensus (it is easy to descend).”

Yet students who dismissed him as a curmudgeon or an anachronism were wrong, or at least not entirely right. Wilder could be grumpy, surely. But what is the point of aging if you can’t be grumpy? And Wilder’s case of grumpiness is instructive. In the ways he insisted upon applying traditional values to the culture of higher education, he proved to be a man well ahead of his time.

The second half of the 19th century was a time of exceptional transformation in the United States. An older culture that had emphasized the importance of character and stressed moral qualities was eroding. By the turn of the century, a new one emphasized materialism, scientific and technical improvement, leisure time and recreation. The concept of character was replaced by a focus on personalities, one that stressed the need for respect, admiration, and above all, success.

Wilder felt the tension of being caught in between. As a scholar of anatomy, he was an agent of change and progress. And he was optimistic by nature. But he was also grounded in the principles of his youth, principles that were fixed in the crucible of the Civil War. The words that Wilder associated with his youth were words such as duty, discipline, work, honor, reputation, morals, and integrity.

Wilder was born in Boston in 1841 to parents who were “members of the New Church,” also known as Swedenborgians; as such they were homeopaths, haters of oppression, and strict vegetarians. Late in life he summarized his parents’ influence. From his father he inherited “a hopeful spirit and tendency to seek new facts and to devise original methods.” From his mother, he gained a disposition “at once active and cautious, an unwillingness to sacrifice principle to expediency, and a tenderness towards animals which has prevented his hunting for sport and restricted his physiologic experiments to such as are painless.” From both parents he drew a life-long commitment to personal and societal improvement.

When Wilder graduated from Harvard with a comparative anatomy degree in 1862, he knew he should join the Army of the Potomac but he believed he lacked both the training and aptitude necessary. Fortunately, he was offered a position as an acting medical cadet in a Washington hospital.

The war, which was transforming American medicine and medical research, created the opportunity for a bright comparative anatomist with little medical background but with a compulsive work ethic, an ability to perform autopsies, and access to medical texts to grow professionally. Wilder soon found himself at the forefront of anatomy and medicine.

He also had his consciousness expanded. By May 1863, he had accepted a commission as an assistant surgeon in the newly formed black 55th Massachusetts Volunteers. During the 28 months that he served in the regiment, he developed a profound respect for the courage and commitment of the black soldiers.

His army experience also let him develop professionally. In what little time he had when he was not attending the sick and wounded or studying medical books, he collected species for his natural history collection, including a large silk-spinning spider he discovered on Folly Island in 1863, that was later given his name (Nephila wilder).

Given the sacrifices that others made on their behalf and the benefits which they would receive, Wilder believed college students should be more strictly held to account than their peers.

In the two years after the war, Wilder obtained a medical degree from Harvard while also working at its Museum of Comparative Zoology and publishing a half-dozen scientific papers. That, and a glowing reference from Louis Agassiz, a prominent naturalist, led to his appointment as Professor of Natural History at Cornell University, one of the new land-grant colleges. He would teach there until 1910.

At Cornell, he developed a reputation as an innovative teacher and a captivating lecturer. He pioneered pre-med education, introduced dissection and laboratory methodology into undergraduate courses, built up a natural history museum at Cornell, and established the Cornell Brain Collection. As president of the American Neurological Association in 1885 and the Association of American Anatomists in 1897, he used his research on the human brain to challenge the scientific racism and gender biases of the time.

In 1893 his former students recognized his contributions to Cornell and their debt to him by producing one of America’s first Festschrifts—a German term for a collection of writing published in honor of a scholar.

While Wilder was a progressive where science and society were concerned, his perception of student conduct remained rooted in an earlier era. By the turn of the century, that brought him into greater conflict with some he called “stoodlums.” Cornell students in 1900 were different from the first students whom Wilder had taught. Students now expected an element of fun and diversion while at college. Football had become an all-encompassing passion.

Wilder disagreed. He had always argued that university students were a special and privileged group. Given the sacrifices that others made on their behalf and the benefits which they would receive, Wilder believed college students should be more strictly held to account than their peers. “Leniency towards transgression, particularly when intoxication is pleaded in extenuation, is seldom really kind to them,” he wrote to the university president in 1909. It was also unfair to well-behaved students. 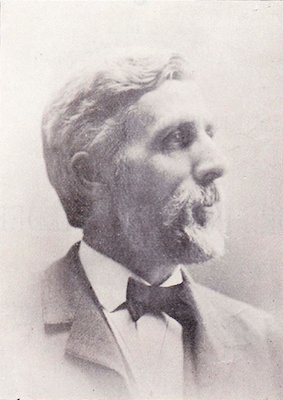 A portrait of Burt Green Wilder in 1889. Courtesy of Kevin S. Weiner.

Wilder had a long list of student activities he opposed. He was foresighted in his targets, pointing at activities that still create problems for universities today. He objected to secret societies, intercollegiate athletic competition of any kind (on-campus sports were fine), betting and gambling, hazing, campus smoking, alumni buffoonery, Spring Day, leaves of absence for other than personal or scholastic reasons, and “stamping in class-rooms.”

He gained national notoriety in the 1880s and 1890s for his opposition to the growing popularity of football. Not only did that sport take students away from their academic work, he argued, but it caused more serious injuries than other activities and also coarsened its audience.

Wilder was always willing to challenge authority in ways that might resonate today. In June 1905, Wilder responded to an article by U.S. Senator Albert Beveridge in the New York Daily Tribune titled “The Young Man and College Life.” Among other things, Beveridge had written, “I never took much stock in the outcry against hazing.” How could the senator defend the practice, Wilder railed, when his government, after a long investigation, had just dismissed cadets and midshipmen from West Point and Annapolis in 1901 for their hazing abuses? Hazing, Wilder continued, corrupted law, morals and ethics by giving one group of students’ arbitrary power and authority over others. Hazing always implied a preponderance of power or advantage on the part of the aggressors. As a result it was not only brutal and unjustifiable, Wilder believed, “but mean, despicable and cowardly.”

Wilder, who had long supported women’s rights, took even greater exception to another of the senator’s paragraphs headed, “The More Fun the Better.” Beveridge claimed that nobody cares how mad the student pranks were. Wilder challenged Beveridge’s argument that, “We cannot change our sex or the habits of it. A young man is a male animal after all, and those who object to his rioting like a young bull are in a perpetual quarrel with nature.” Although Wilder accepted that, “we cannot change our sex” as a truism, he was convinced “there are many, in college as well as without, whose unsexing would render this a cleaner and safer world.” While agreeing that the “habits of our sex” might not be changed in a day or a decade, Wilder was adamant that change was possible—and had to be possible if man was to be more than an animal.

Richard M. Reid is a professor emeritus of history at the University of Guelph in Ontario. The author of several books on the Civil War, he is currently working on a biography of Burt G. Wilder.