When Alexis de Tocqueville visited the United States during 1831 and 1832, he was struck by the fact that the young republic had no overpowering metropolis, that “the intelligence and the power of the people are disseminated through all the parts of this vast country.” While New York City was the hotbed of innovative newspapering, much of that innovation was in the service of disseminating the news to the broadest possible audience. The New York Sun, established by Benjamin Day in 1833, led the field in innovation. Eager to sell papers during a severe banking crisis, Day priced the Sun at one penny and outsold his rivals. He hired reporters rather than relying on his readers for news, as had been the common practice. But it was the far-sighted business plan of his successor, Moses Yale Beach, which would truly revolutionize the distribution of news.

Before Samuel Morse received his first patent for the electro-magnetic telegraph in 1840, news traveled as quickly as the swiftest horse, boat, or carrier pigeon. Foreign news, printed in foreign newspapers, was collected by agents in rowboats who met ships at Halifax, Boston, and New York. Regional news, which might include election results, presidential messages, or official pronouncements, traveled in a variety of ingenious ways. In 1843, the printers of the Sun waited aboard a steamboat for the text of the governor’s New Year’s message. When it arrived by rail from Albany at Piermont in Rockland County, the printers set up type on the boat as they headed down river to New York City. The next day, the Sun proclaimed: “By the Sun’s Exclusive Express. From Albany Through by Horse and Sleigh in 10 Hours and ½.”

As the telegraph expanded up and down the East Coast in the spring of 1846, Beach saw an opportunity to hasten the arrival of the latest news of the ongoing war with Mexico by combining the pony express, the U.S. mail coach, and the telegraph. The dispatches originated in the Mexican port of Veracruz, crossed the Gulf of Mexico by boat, and landed at Mobile, Alabama, where Beach employed an express rider to beat the mail to Montgomery. There, the news rejoined the mail for the journey to Richmond, the closest telegraph head, and was put on the wire. Beach did not pay his riders unless they gained a 24-hour edge over the mail. His greatest innovation was offering an equal share in the venture to other New York City dailies, his newspaper rivals. Four papers accepted: The Courier and Enquirer, The Journal of Commerce, The Express, and The Herald. With the Sun, they were soon referred to as “the associated press of this city.”

Thus was born the Associated Press, a uniquely American institution, at once a business and a public trust. In structure, it is a not-for-profit cooperative, engaged in gathering with “economy and efficiency an accurate and impartial report of the news” for its newspaper members. Where other countries have established state news agencies to address the costly challenge of gathering and distributing news from near and afar, in America it took ferocious competitors coming together to share the financial and logistical burdens associated with informing the public. Because this effort by newspaper publishers was aimed at reporting on the government’s war against another nation, as opposed to an effort by the government to shape public opinion on its own affairs, the Associated Press has always sought to protect and preserve its independent voice.

At the time he organized the cooperative, Beach doubtless understood that the telegraph would remove some competition and duplication of effort among members. If the telegraph office limited each sender to 15 minutes, why would a newspaper’s agent wait in line to send a common digest of news when the next person was going to be sending the same thing? As the telegraph spread nationwide, AP established arrangements for selling telegraphic news and inviting American newspapers to share the cost of the service. Member newspapers exchanged their own local news with the New York-based organization for news from New York City, from across the nation, and from overseas.

The fortuitous combination of Morse’s telegraph and Beach’s news service transformed the delivery of news in ways that would be hard to overstate. For the first time, strangers living far apart could acquire the same information at the same moment. Editors could collect news as it was breaking rather than rely on previously published reports. The imaginative impact of the telegraph may be gauged by Anthony Trollope, who lamented in his 1854 novel, The Way We Live Now, that because of the telegraph, “newspapers are robbed of all their old interest, and the very soul of intrigue is destroyed.” 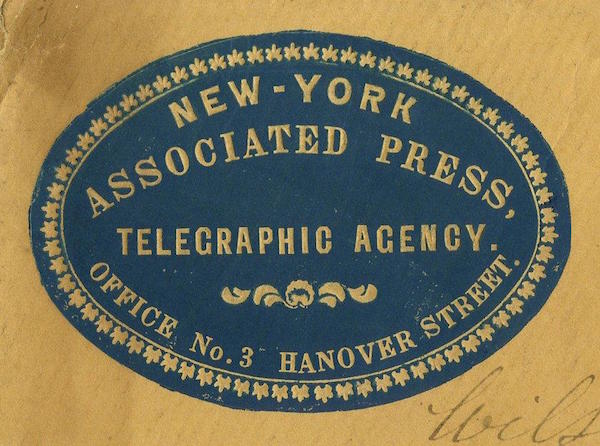 During the Civil War, anyone trying to learn the results of a battle or the fate of a loved one would have disputed Trollope’s assertion. Telegraph reports were subject to human error and transmission was erratic, if not interrupted by the war itself. At the same time, the war did draw attention to AP’s standards of objectivity. In testimony before the House Committee on Judiciary on February 5, 1862, Washington agent (as the bureau chief was then called) Lawrence Gobright articulated AP’s ideal of factual and impartial reporting. The committee was investigating how AP had been able to circumvent government censors in wartime, a charge that may have originated with newspapers rankled by AP’s favorable treatment by government officials. When asked by the chairman, “Can you state whether you have been able to send information over the telegraph wires which other correspondents of particular papers have been unable to send,” he replied:

“My business is merely to communicate facts. My instructions do not allow me to make any comments upon the facts which I communicate. My dispatches are sent to papers of all manner of politics, and the editors say that they are able to make their own comments about the facts which are sent to them. I therefore confine myself to what I consider legitimate news… Some special correspondents may write to suit the temper of their own organs, although I try to write without regard to men or politics.”

Translated into modern newsroom vernacular: get it first, but first get it right. In a few unfortunate cases, though, the AP’s dedication to accuracy did give way to haste, as when AP prematurely reported the successful D-Day landings and (years later) the death of Bob Hope, much to the confusion of the Germans and the bemusement of the comedian.

The AP’s “down-the-middle” approach to the news was sometimes anathema to the government’s desire to spin events during the Civil War, but it gave news from the front a much greater reach. A century later, the same straight-news approach managed to offend both Northern and Southern publishers during the Civil Rights era. The archives are filled with the letters of outraged editors demanding AP retract or correct various stories. That AP editors patiently answered each letter in kind is remarkable. That AP continued to witness the violence from Atlanta, Birmingham, Montgomery, Selma, and Little Rock is one of its greatest achievements. The bedrock of this kind of journalism is the people’s right to know, the belief that public opinion matters, and that therefore the risks taken to inform the people are worth taking.

As de Tocqueville observed, the only thing more powerful than the press is the people.

is director of the Associated Press Corporate Archives, New York.