One fall evening in 1881, a prospector named Henry Spiller knocked on the door of Aaron and Rosie Winters’ modest stone cabin about 40 miles due east of Death Valley and asked to stay the night.

After dinner Spiller exuberantly showed off a sample of “cotton ball,” a weird, semi-translucent rock formation containing borax. Spiller suggested to his hosts that fortunes awaited those lucky enough to find a generous deposit of the stuff. He showed them how to test for the mineral’s presence with a combination of alcohol and sulfuric acid. After Spiller left the next day, Aaron told Rosie he had seen a material very similar to this out on the desiccated lakebed of Death Valley.

That morning the couple set off to collect samples of the opaque dirty white bulbous material that resembled a handful of dirty cotton balls spread across the desert floor. They made a camp and (so the story goes) “when the shadows had closed in around them, Winters put some of the salt into a saucer, poured the acid and alcohol on them, and with trembling hand struck a match.” Watching anxiously, Aaron exclaimed, “She burns green, Rosie! We’re rich, by God.”

Getting rich by finding gold, silver, or oil is a California tale as old as the Gold Rush and as new as the Beverly Hillbillies. But the story of 20 Mule Team Borax is also the story of one of America’s defining brands, a product that came to sit on a shelf in every household, offering an only-in-America promise that by using this particular washing powder, immigrants from around the world could share in the heritage of the Wild Wild West and join the upper middle class.

Winters staked his claim in the middle of Death Valley and quickly sold the land for $20,000 in 1883 to William Tell Coleman, a Kentucky native turned San Francisco borax magnate who built Coleman’s Harmony Borax Works on the property. Forty Chinese workers scraped the mineral from the harsh desert floor for $1.50 per day, except when summer temperatures reached above 120 degrees Fahrenheit—not to give the workers a break, but because the borax could not crystallize properly under such extreme conditions.

Coleman used mules to transport the borax 162 miles due west to a railroad shipping spur in Mojave, California. The teams that later became infamous as “20 Mule Teams” in fact consisted of 18 mules and two draft horses. The animals were hitched to two massive wooden wagons with 7-foot-high rear wheels, carrying over 10 tons of processed borax apiece. Two fully loaded wagons with a full 1,200-gallon steel water tank and additional supplies weighed in at 36.5 tons. Just two men operated the wagons—one driving and operating the brake of the lead wagon, the other minding the rear wagon’s brake. The trip took 10 grueling days across the hot desert and was both monotonous—moving in a straight line was not much of a challenge—and dangerous on cliffside curves where an entire wagon train could fall off, driver and all. Specialized sections of the mule team were trained to angle their bodies while stepping sideways so that the preceding animals could navigate curves. 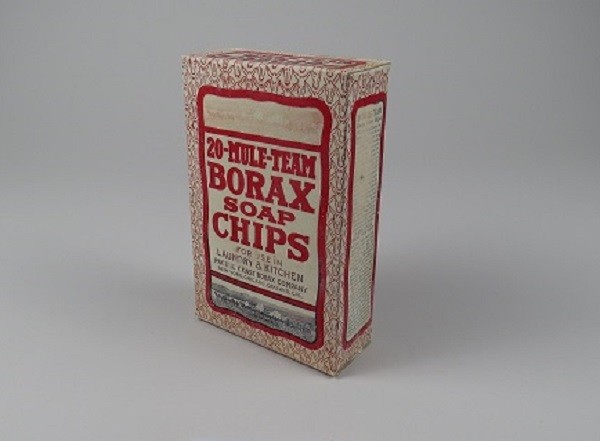 Coleman got so much borax out of Death Valley that the market crashed. In 1890, he sold out for half a million dollars to Francis Marion “Borax” Smith. Coleman died broke three years later.

Encouraged by young employee named Stephen Tyng Mather, Smith capitalized on the “lore and mystique” of Death Valley by creating the 20 Mule Team brand in 1894. Never mind that by 1896 borate ore from the region was shipped entirely by rail; the company created personalities like feisty William “Borax Bill” Parkinson, who was hired and trained as a driver for the 1904 St. Louis Exposition and other promotional tour events across the U.S. When Parkinson died suddenly another man became the new “Borax Bill.”

Borax Bill, said an early brochure, spoke to his balky mules in language “that would not sound well in polite society.” If it seems strange that housewives of the time embraced the idea that a man with a dirty mouth would help them get their clothes clean and white, it helps to remember what hard labor laundry was before the advent of washing machines and sophisticated detergents.

Smith’s goal was to “put a box of borax in every home” and he succeeded at doing exactly that. By the 1920s the brand was considered a legendary triumph of American advertising, lauded for creating such demand that prices fell for consumers.

The brand’s popularity coincided with a push toward cleanliness and germ eradication in both the U.S. and Europe. Besides being promoted as a laundry detergent, borax was touted as an essential part of personal health, hygiene, and cosmetics. A 1919 advertising pamphlet titled Borax: The Magic Crystal read, “Perfect health depends on perfect hygienic cleanliness; and perfect sanitary cleanliness is secured by the use of nature’s greatest cleanser and most harmless antiseptic—Borax.” The product materials spoke in a kind of code to hard-working women who wanted to better their lot. Borax pitched itself as “a very popular powder for whitening the faces of ladies who are too much tanned, or have faded in some way.” The pamphlet said the product could remove freckles, be used as a sunscreen—or a deodorant—and soften hands that had done too much manual labor. The message that being clean—and paler—was the ticket to the American Dream was almost explicit in advertising of the time, which was aimed at a big melting pot of recent immigrants. As ad executive Albert Lasker told his staff in the 1920s, “We are making a homogeneous people out of a nation of immigrants.”

In 1930, the company pulled off another trick of turning itself into not just a shared soap but a shared memory of bygone frontier days, producing a radio show called Death Valley Days. These Western morality tales ran weekly for 15 years on the radio and then another 18 years and 600 episodes on television, where it was one of the longest-running Western programs in broadcast history. Ronald Reagan hosted the program from 1964 to 1965, and actors including Angie Dickinson, Clint Eastwood, James Caan, and James Coburn did guest appearances early in their careers.

Death Valley Days was Reagan’s last TV show before he ran for governor of California. In his ads hawking Borax, he is simultaneously a character of the old West, a glamorous actor, and the father of Patty Reagan, who shows how domestic Borax can be. It’s a neat trick, and it foreshadows Reagan’s uncanny ability to evoke a mythic past with a vision of domestic tranquility for political purposes.

But underneath all of the ideals of the frontier, of blockbuster marketing, and of the melting pot, what’s probably given 20 Mule Team Borax its sticking power is that it speaks to the core American value of hard, dirty work—even if it only took 18 mules.

is an artist and educator residing in Joshua Tree, California. A 2015 Guggenheim fellow in photography, she is currently producing The Mojave Project. For more information visit kimstringfellow.com.