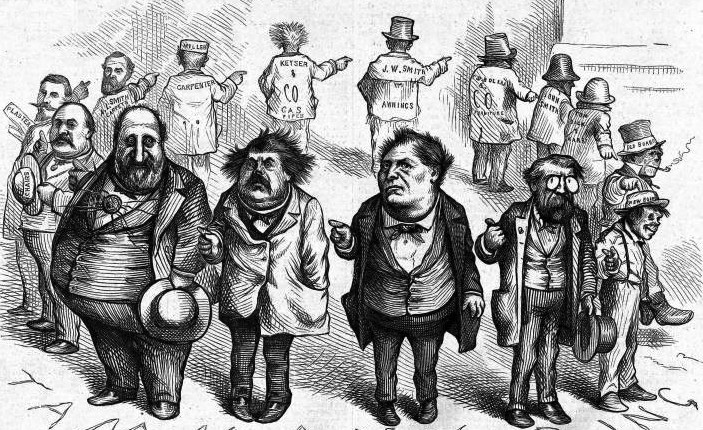 Voters are in a bad mood. Again. We are routinely (and justifiably) frustrated with our politicians, but “throwing the bums out” doesn’t seem to change much. And we are all bracing for another anger-pageant that will stomp through American life for the next 13 months until election day.

A forgotten moment in our history suggests that the way out of a bad political mood is not more rage, but a new political perspective. Around 1900, after years of anger at “vulgar” politicians, a young journalist pushed voters to resist the easy impulse “to go out with the crowd and ‘smash something.’” It was too easy, the muckraker Lincoln Steffens began to argue, to believe that bad politicians were just immoral people. Instead he asked his massive readership to look at the structure rather than the individual, to think about the warped systems that enabled political corruption, and to consider the ways angry voters inadvertently encouraged behavior they condemned.

Lincoln Steffens was the perfect man for the job. The young writer had bounced from California to Europe to Manhattan, driven by wanderlust, contrarianism, and a preference for the sleazy over the respectable. He honed his scorching prose, and learned about New York’s “low-life,” as a crime reporter in rough-and-tumble Manhattan in the 1890s. There was something feisty about Steffens. Over his long career, he was often wrong, sometimes a sucker, but rarely a coward. One politico called him “a born crook that’s gone straight.”

Like many Americans, Steffens grew up cursing his leaders. Between 1865 and 1900, frustrated citizens pointed to the never-ending string of political scandals and stolen elections, as leaders failed to address the massive traumas of the Gilded Age. Citizens often looked down on the parties, like the wealthy young man who wrote that all politicians were a “shifty-eyed lot, dribbling tobacco juice, badly dressed, never prosperous and self-respecting … a degraded caste.”

Attacking leaders was an easy route to becoming one. Self-impressed tycoons, high-toned editors, and rising politicians “greedy for power” all insisted that they knew how to clean up politics. Replace bad, immoral men with “the best men”—wealthy, God-fearing, respectable—and the democracy would fix itself. And by “the best men,” they meant themselves.

Again and again, angry voters tried this approach, throwing the bums out in election after election. In major cities, “reformers” applied the same formula, winning the mayor’s office periodically, but falling out of power just as quickly. And control of Congress changed hands with dizzying speed in the 1880s and 1890s, yet politics only grew more corrupt.

But as a crime reporter who befriended crooked cops and scheming politicos, Steffens stumbled onto a new approach to journalism. Instead of moralizing, he listened. People would talk, he found, if you let them. Steffens hung around police stations and pool halls, absorbing everything he could. He even tolerated the ceaseless lectures of a young police commissioner named Roosevelt (though Steffens devised ways to shut his new friend Teddy up). And he refused to sit, isolated, in New York, setting out across the country to study dirty tricks from Boston to San Francisco.

Steffens came away with two major insights. Bad politicians were not necessarily bad people, and society, as a whole, encouraged their sins.

He learned the most from Israel Durham, boss of the Philadelphia political machine, an organization so rotten that Ben Franklin and George Washington’s names often showed up on voting rolls. (People in Philly joked: “The founders voted here once, and they vote here yet.”) But Steffens liked Iz’ Durham. He concluded that Durham was not a bad man, but merely a successful man, trapped at the head of a system beyond his control. Durham was certainly guilty of tremendous crimes, but society kept rewarding him for them. Among other things, Durham explained that regular campaign donations, coming from upstanding citizens, did more to buy influence than any illegal kickback. Such contributions, the boss shouted, were “worse than bribes!”

Conversations with Durham and other bosses led Steffens to conclude that the angry public was focused on the wrong problem. Political dirty tricks were not “exceptional, local, and criminal … not an accidental consequence of the wickedness of bad men, but the impersonal effect of natural causes.” Americans—obsessed with individualism—liked to rage against immoral men, but really it was big, impersonal structures—like the steady drip of campaign contributions—that did more to buy power and harm the democracy.

Steffens began to write, furiously, publishing his “dawning theory” in his famous “Shame of the Cities” series in McClure’s Magazine between 1901 and 1904. Politicians were not a special caste of wicked men; they were no more immoral than bribing businessmen or lazy cops or short-sighted voters. Often, angry middle-class citizens, looking for someone to blame, perpetuated the pointless cycle of reform and relapse, throwing out individuals but failing to make real change. 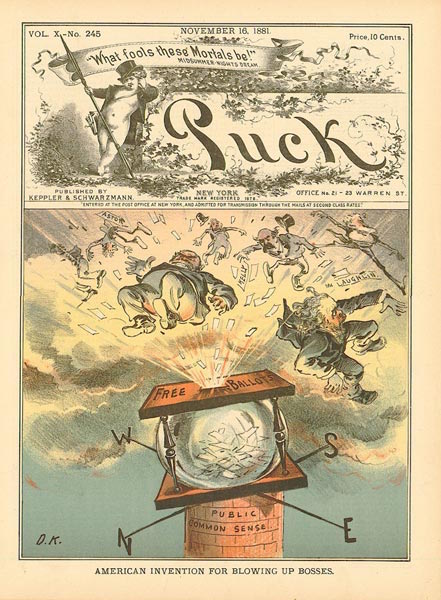 Illustration from Puck, November 16, 1881, “American Invention for Blowing Up Bosses.”

Their outrage at the “bad men” in government was really just a “thought-saver of the educated who think that they think,” Steffens declared, a way to avoid considering the deeper problems with their political system.

Steffens was the most articulate voice of the new burst of reform remaking American democracy after 1900. American voters began to see that the country’s political problems were, really, social problems. Instead of hollering about immoral bosses, reformers simply went around them, introducing primary elections, ballot initiatives, recall votes, and eventually the direct election of senators. Progressive activists focused on improving political structures, not what they labeled electoral “lynchings” of the bad guys.

Some clever bosses jumped on the bandwagon. Tammany Hall cleverly recast itself as a reform organization. But this was fine; it meant that voters were rewarding reform over corruption. By 1910, journalist William Allen White imagined the sleaziest bosses of the 19th century observing the new, cleaner elections, “cackling in derision until they were black in the face” at neutered politicians forced to play by the fairer rules. These changes marked the greatest moment of political reform, not sparked by a major crisis like a war or depression, in American history.

In our own era of intense skepticism towards the media, it’s important to remember how much we owe muckrakers like Steffens. And in our time of anger at politicians, it’s important to consider where bad leaders come from. Those today who attack all politicians, while running for office, are no better than phony Gilded Age moralists, who condemned the “bad men” in Washington while trying to join them. Their rhetoric turns every campaign into a contest that rewards anger, providing a smokescreen behind which elites masquerade as outsiders.

And it confuses the issue: politicians are, as a group, no better or worse than the rest of us. If they stink, something’s rotten with the system that feeds them.

Yet anger at our leaders is the political cliché of our day. As long as we see politics as a war between good and bad individuals, ignoring the structures that reward or punish them, this will continue. America’s stalled democracy is not our leaders’ fault alone, but ours as well, for treating all political problems as personnel problems.

is a curator and Jefferson fellow in the Division of Political History at the Smithsonian’s National Museum of American History. His book—The Virgin Vote—on the role young people played in 19th-century American democracy, will come out this spring.