African-American women joined the WAC during World War II seeking opportunity and a chance to support the war effort. For some, the experience was disappointing. Courtesy of the National Archives at College Park/Wikimedia Commons.

In late 1944, four African-American women—Mary Green, Anna Morrison, Johnnie Murphy and Alice Young—enlisted in the Women’s Army Corps, or WAC, the newly established military branch for women. All were eager to help the nation’s fight for democracy by learning skills the army desperately needed, and all believed that later these skills would improve their employment prospects for the future. Instead, within a year after reporting for duty, the young women stood in the dock at Fort Devens, Massachusetts, charged with disobeying orders.

The Fort Devens strike and court-martial was one the most publicized courts-martial of World War II; largely forgotten today, it was a curiosity that fascinated Americans in its time. Trials of black servicemen were routine, yet those involving women in uniform—an impossibility until the creation of the WAC just three years before—were rare. The case served as a proxy for many of the war’s controversies, including debates about women’s suitability for military service and about racial segregation in the armed forces. It also brought into question Americans’ domestic commitment to the values of democracy for which they were fighting.

The records from the Fort Devens WAC case provide insight into the systemic exclusion of black women. More than 6,500 black women volunteered for the WAC during World War II, an era when “Negro” signified black men and “women” signified white females. Each of their enlistments posed a bold challenge to other Americans, to recognize these soldiers as black and female patriots. The story of the Fort Devens court-martial details how onerous, unforgiving, and lonely that challenge was.

Green, Morrison, Murphy, and Young were all in their early 20s when they enlisted in the WAC, a new corps established to help the army meet personnel needs for a two-front global war. Wacs (as individual female service members were known) were intended to replace male soldiers in important support positions, freeing the men for field and combat service. The WAC cautiously avoided upsetting conventional gender paradigms. Aggressively advertising in newspapers and on the radio, it recruited women for suitably feminine jobs such as clerical workers and medical technicians, though it also prepared some to become drivers and aircraft mechanics, or to fill other non-combat jobs that had formerly been restricted to men. Crucially, the WAC promised to train women for skilled assignments. This appealed to Green and Morrison, who were seeking an escape from maid work; to Young, who had left nursing college but still harbored nursing ambitions; and to Murphy, who had clerical training, though no job.

In October, the four women arrived at Fort Devens, which had been chosen to house a black WAC detachment of 100 people. They had orders to report to the post hospital. As Young recalled, they were excited because “the whole company was under the impression that we had come here to go to medical technicians school.” Instead, officers assigned them to clean the hospital and wait on staff and patients. The army called it orderly duties. The women called it maid work. As one of the Wacs told her black officer, “we get tired of just washing and cleaning, and every time what they see something they tell us to wash this and wash that. It looks like every time they want some of the bad work done they say, ‘go get one them Wacs. Tell her to do so and so.’” Aghast by their confinement to peripheral and menial tasks—especially while all but a handful of white Wacs worked in skilled assignments such as teletypist, X-ray technician, chaplain assistant, or driver—the black Wacs complained to their superiors, who ignored their concerns. 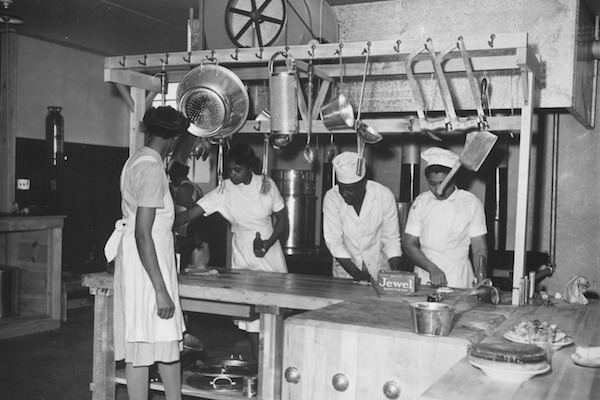 Everything changed on March 9, 1945, when nearly all of the black orderlies at the base refused to report to their duty stations. The strike, a mutiny in military terms, lasted into the next day, ending after an extraordinary intervention from the chief officer of the First Service Command, General Sherman Miles. Most of the black Wacs returned to work, but Young, Green, and Morrison opted for a court-martial instead and were promptly arrested. Days later, Murphy, who had been on leave the day of the strike, joined them, proclaiming, “I would take death before I would go back to work.”

The women’s trial commenced nine days after the March 10 arrests. Throughout the proceedings, the army prosecutor focused on the defendants’ failure to obey orders. The Wacs, in turn, accused their officers of discrimination. Their officers refuted the charge, insisting that the army did not discriminate against black Wacs—at Fort Devens or elsewhere. Indeed, bowing to pressure from an emboldened civil rights movement, the service had announced in 1940 the equal treatment of troops regardless of race and, in 1942, accepted black female recruits (initially, the only service to do so) under the same policy.

The problem was that under the military’s newly announced policies, “not discriminating” still resulted in a segregated army where officers had power to utilize troops “where they best fit”—and military policies assured an awkward fit for black Wacs. The War Department maintained separate directives for black soldiers (prioritizing segregation) and for female soldiers (prioritizing their status as assistants), and applied both sets of regulations to black Wacs.

White Wacs could attend a wide range of schools that remained off-limits to black Wacs, even when they were qualified. The complexities of organizing separate barracks, courses, and facilities, per army segregation policies, made offering black Wacs better training too expensive and cumbersome. Alice Young had attended nursing college and Johnnie Murphy a clerical course, but that didn’t matter—both still were stuck working as orderlies. When a frustrated Young requested admittance to Fort Devens’ driving school, which conducted sessions for black soldiers and for white Wacs, she was turned down because the post did not have classes for black Wacs. When investigators looked into the issue following the court-martial, they concluded that the motor pool did not discriminate. Offering driving courses for black men and for (white) women was deemed sufficient.

WAC director Oveta Culp Hobby hewed to established policies that marginalized the black Wacs even further. She ordered that every black unit have a black Wac commander, a practice that created self-contained units that could be, and often were, isolated. Concerned about the reputed sexual promiscuity of African-American women, Hobby refused to send black Wacs overseas until pressured to do so in the last year of the war. She curtailed the recruitment of black women in hopes of lessening their numbers and, conversely, she assumed, encouraging white enlistments.

The army demonstrated concern for white Wacs’ morale but ignored black Wacs’ woes. Before black Wacs arrived at Fort Devens, some white Wacs had worked as orderlies. When they complained, officers organized medical classes for them. Most were reassigned. When their black replacements pushed back, officers disregarded their grievances. “As far as I’m concerned,” white army nurse Lieutenant Simone Parent told investigators, “I think they just wanted something to complain about,” later remarking, “you can’t trust them,” but assuring her interviewers that it wasn’t “a racial thing.” White Wacs, perched in the better jobs, were perceived as good soldiers who followed orders and got along with others. Black Wacs, consigned to scrubbing floors and pushing heavy food carts, were viewed as constant complainers who performed poorly and perfunctorily blamed racism.

Their enlistments posed a bold challenge to other Americans, to recognize these soldiers as black and female patriots.

Black men in the service also suffered under segregation, yet as men were accepted as soldiers where black Wacs were not. “These are women and Wacs really aren’t soldiers,” The Washington Post noted, of the Fort Devens strikers. One campaign to support the defendants—launched by black legionnaires—appealed to the army’s understanding that Wacs were naturally “more frail, impulsive and sensitive than men.” Even the Wacs’ NAACP lawyer, Julian Rainey, rested his defense on this premise. A World War I veteran who well knew racial discrimination in the military, he attempted to free his clients by questioning their intelligence and repeatedly characterizing them as “confused by something they couldn’t understand.” Black men routinely praised the courage and determination of black servicemen who breached military protocol in defense of African Americans’ rights, but did not necessarily perceive black women as equally capable or self-sacrificing. Green, Morrison, Murphy, and Young “didn’t know what they were doing,” Rainey argued at trial.

But the black Wacs did know what they were doing. They had enlisted in the WAC based on army policies that guaranteed fair treatment, and they broke protocol only after realizing that those policies did not uniformly apply to them. Admitting that she was “sick and tired” of her treatment at Fort Devens, one black Wac who returned to the job, Private Dorothy Petty, noted, “I came in the army to try to help my country. You see, I thought I was a citizen.” Private Mary Johnson felt the same. “We might have gone about it the wrong way,” she admitted, “but the thing we were fighting for was justice and rights. We want to live like other people.”

Many Americans, riveted to the story as told by the black and mainstream presses, came around to the strikers’ side. Ordinary citizens joined civil rights leaders in protests, including besieging the offices of President Franklin D. Roosevelt and Secretary of War Henry Stimson with letters demanding an investigation and for the just treatment of the Wacs on trial. Caught off guard by the public’s fascination with the case and unsettled by the questions that these women’s experiences provoked, the War Department quickly dismissed the charges and released the women back to their unit, following up with an investigation which noted problems with the treatment of black Wacs but changed little. Green, Morrison, Murphy, and Young and the other black Wacs at Fort Devens worked as orderlies throughout the remainder of their time in the WAC.

Within two months of the strike, the newspapers had stopped writing about it. They had other news to report: stories about black servicemen who bravely battled segregation and white Wacs who carved new paths for women that today are familiar, and inspiring, World War II narratives. For a brief moment during the spring of 1945, however, Anna Morrison, Mary Green, Alice Young, and Johnnie Murphy put black women in uniform front and center for Americans— reminding them, uncomfortably, that they lived in a country where some patriots still didn’t fit.

Sandra M. Bolzenius is a former instructor at Ohio State University and served as a transportation specialist in the United States Army. She is the author of Glory in Their Spirit: How Four Black Women Took On the Army During World War II.