The residence hall in the United States has come to mark the threshold between childhood and adulthood, housing young people during a transformational time in their lives. When parents drop their kids off at college, do they pose in front of a classroom building or the library? Maybe. But it’s the unloading of clothes, computers, and comforters at the dorms that defines the break between childhood and adulthood.

This rite of passage is taken much more seriously by Americans than by people in other countries. In the United States, largely because of Americans’ romantic attitude toward the universities of Oxford and Cambridge—where young men once lived and studied together and forged lasting identities based on shared housing—students living together in one building has come to be seen as an essential part of the college experience. Students spend just 12 or 15 hours per week in class, plus a few hours of study; the rest of the time they are socializing, working out, gaming, managing clubs, politicking, making music, and relaxing with friends. In short, they are forging connections that will last a lifetime and establishing a network that will benefit their careers.

But living on campus—and the social benefit Americans place on it today—was never inevitable. American universities haven’t always intended for dorms to bring people together; campus housing was also organized, for many years, to keep groups of students apart. In fact, the very first purpose-built residence for college students in America was the Indian College at Harvard University, constructed by a British religious society in the mid-17th century to house Native American students and keep them separate from white boys.

And while today’s residence life experts tout diversity as the key reason for residing with fellow students, from the 17th century to the early 20th century, anti-diversity was the norm. Dormitories introduced young men to other men like themselves, and anchored young women in the domestic sphere they were expected to inhabit later on—and architects and university leaders came up with physical designs that furthered these social goals. 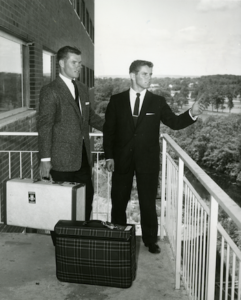 In the colonial period, college buildings were often single, multipurpose structures that housed all the functions of a school, including the president’s home, faculty apartments, student bedrooms, chapel, library, dining hall, and classrooms. Harvard’s first governing board reported in 1671, “It is well known … what advantage to Learning accrues by the multitude of persons cohabiting for scholasticall communion, whereby to acuate the minds of one another, and other waies to promote the ends of a Colledge-Society.” Since the actual curriculum was limited, Christian morality was a large part of what boys absorbed at the colonial college. This character formation was gained by observing role models; professors and students sharing living space was good for moral development. This attitude was an essential intellectual and emotional precondition for the American dormitory.

A uniquely American sense of religious identity provided the ongoing impetus for sorting students into dorm-style housing during the 18th and 19th centuries. Great Britain had one official state religion, Anglicanism, which dominated life at both Oxford and Cambridge. But in the United States, religious freedom expressed itself in dozens of sects—each of which wanted its own college, with its own moral imprint on its members. Religious leaders often founded small schools in rural districts, away from the crime and vice of the city; assigning students to live together in a dormitory allowed young boys to bond with each other and their tutors, reinforcing their social connections. Ideally, a young man’s roommate had a marriageable younger sister, tightening the bond once more.

While today’s residence life experts tout diversity as the key reason for residing with fellow students, from the 17th century to the early 20th century, anti-diversity was the norm. Dormitories introduced young men to other men like themselves, and anchored young women in the domestic sphere they were expected to inhabit later on.

Although dorms were exclusionary, on balance, university-sponsored housing was still more democratic than the houses built by the private fraternities for white men in the late 19th century. As fraternities surged in popularity, they erected houses for dwelling, partying, and secret rites on many American campuses. They soon began to dominate college social life, and by the 1870s a non-Greek student (also called an “independent”) had little chance of becoming student body president or first trombone in the marching band. As historian Nicholas Syrett has explained, “Like any society that includes some people and excludes others, fraternities gain prestige precisely through that exclusion.”

In the service of solidifying their status, fraternity men also pushed the boundaries of acceptable student behavior. At Cornell University, the University of Michigan, and other colleges, fraternity brothers made it known that so-called coeds (female college students) were not allowed at their parties, and that local women were the preferred guests. The brothers saw lower-class women as sexually available and “ostracized those female classmates who threatened their hegemony on campus,” Syrett writes.

College deans maintained that the gulf separating fraternity men from other men on campus could be blamed on housing. In 1930, S. L. Rollins, a dean of men at Northwestern University, spoke plaintively, “[It is an] undesirable result when the fraternity men are well housed while the independents are not. This inequality in housing is the predominant cause for the feeling of inferiority [among non-Greeks] and for their animosity toward the fraternity men.” Today it might seem laughably naïve that anyone thought animosity arose from poor housing, rather than racial and religious discrimination, but Rollins and other administrators felt that the construction of good dormitories was a positive intervention that would smooth the torn fabric of college life. So, in the early decades of the 20th century, many university leaders lobbied strenuously for a new sort of residence hall to serve as a democratic alternative to the elitist fraternity. 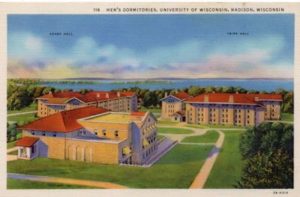 The University of Wisconsin’s Adams and Tripp Halls, pictured here on a 1926 postcard, were designed to level class distinctions. Courtesy of Carli Yanni.

Many of these pre-World War II dorms were arranged around a quadrangle, much like Cambridge and Oxford, to shut out the bustling city, create a private outdoor space, and hark back to vaunted English forebears. The University of Wisconsin’s Adams and Tripp Halls, built in 1924-26, are typical. They face away from Lake Mendota, making them cozy and self-contained, and they are laid out in the shape of a square donut, with four sides built to the same height and a central courtyard inaccessible to anyone other than a resident.

College deans wanted to establish the same esprit-de-corps within houses as could be found in an exclusive fraternity, but that required engineering. Each man had a single bedroom, so to create community out of these single rooms, students were organized into houses, formed vertically off of a staircase in a porous arrangement sometimes called the staircase or entryway plan. A brochure directed at incoming Wisconsin students emphasized the possibility that dorm life in places like Adams or Tripp Halls could level class distinctions, noting that the son of a banker and a farmer’s boy could converse and relax in front of the crackling logs of the fireplace.

Unfortunately, for all these widespread claims of egalitarianism, the dormitory still perpetuated barriers. Black students, for instance, weren’t permitted to live in white dorms—at Wisconsin or nearly anywhere else in the U.S. When the enormously popular University of Wisconsin chef Carson Gulley, who was African-American, couldn’t find housing in Madison in pre-civil rights America (before the mid-1960s), university leaders assigned him an apartment in Adams Hall—but it was in the basement, and Gulley’s family had to enter through a separate entrance that was reminiscent of a servants’ door.

Chef Gulley’s apartment was shoehorned into an existing dormitory; in contrast, nearly every space at Howard University in Washington, D.C., was built by black architects for black students. At historically black colleges and universities like Howard, the social value placed on the dormitory was high. Black colleges represented in physical form the acquisition of land, the aspirations for education, and successful uplift of African-Americans—and a certain style of dorm life became part of the program. But that came with a private cost: The handbook for Howard students said, “Always remember that a Howard student is a marked student. Each represents more than himself or herself, because the University entrusts its honor and reputation to each student.”

In particular, the construction of Howard’s Women’s Dormitory (known today as Harriet Tubman Quadrangle), demonstrates how these spaces were expected to protect and prepare their residents. The building was overseen by Lucy Diggs Slowe—a nationally respected educator, tennis champion, writer, and founder of the first African-American sorority (Alpha Kappa Alpha) who was dean of women at Howard for 15 years. Built under her close direction in the 1930s, the Women’s Dormitory resembled Adams and Tripp Halls at Wisconsin in that it was a completely enclosed. Its courtyard was larger, however, and there were fewer points of entry to the inside of the dorm—it was closed off from the city for the protection of the young women. Howard’s administration assumed that female students needed greater protection and surveillance, so the dorm’s architect, Alfred Cassell, organized room entrances around long corridors instead of the entryway plan. 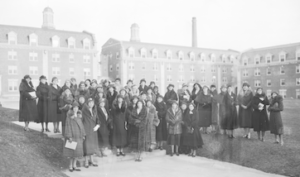 On the first floor of one side of the quadrangle, Cassell, at Slowe’s behest, supplied a panoply of social spaces, including parlors, a music room, and a social hall that could be used for special parties or for everyday dining. “A dormitory should be as much like a well-ordered home,” Slowe wrote, “as it is possible to make it”—in other words, a ladies’ dormitory was where the refinements of a carefully managed home would develop. Students entertained guests in order to learn to be good hostesses, and (later) good wives and mothers. The female students needed the extra living space, in part because they were not to go inside men’s dormitories; if a woman was meeting a date (chaperoned of course), he had to come to her dormitory. The female students at Howard were being trained in “thoughtfulness, courtesy, and hospitality,” Slowe said. Socializing was a goal of living in the dorm; the residence hall set a high standard for social behavior. The beautifully appointed parlors and music rooms were a stage set for enhancing students’ moral development.

Over the decades, American educators have cherished the residence hall as a transformational space in which adolescents turned into adult, morally conscious citizens. Of course, this may seem strange today, when living in a residence hall might just as well lead to a decline in moral character.

Either way, in the weeks around the start of the fall semester, students should stop and think more deeply about the physical space of their residence hall. What possibilities does it offer? Does it reinforce class and race divisions, or does it breakdown social expectations? Corridors make keeping tabs on students easy, but echo with noise; staircase plans prevent roughhousing but offer no communal space; lavish lounges in women’s halls were once intended to civilize male visitors, as were specially designed benches for courting couples. In spite of the fact that college housing policies often allowed for discrimination according to class, race, and gender, deans persisted in their vision of residence hall as a democratic alternative to the elitist fraternity. Against the backdrop of sweeping societal changes, communal living endured because it bolstered networking, if not studying. It’s no wonder families still pose next to the freshly made bunk bed.

Carla Yanni is a professor of art history at Rutgers University and the author of Living on Campus: An Architectural History of the American Dormitory.