We are told that this year’s presidential election is unprecedented in many ways. The American voters are faced with the choice between an unlikely candidate who has been repudiated by many within his own party, and a seasoned politician whom the head of the FBI characterized as “extremely careless.” The tumultuousness of the race makes many long for the good old days when elections were civil, thoughtful, and quickly resolved

In the Republican Party convention, Hayes prevailed on the seventh ballot against the early party favorite, Maine Representative James G. Blaine, after Blaine was unable to clear his name from a scandal involving the lucrative payment that he allegedly received from the sale of apparently worthless railroad bonds. Tilden had a much easier road to the Democratic nomination due to his reputation as a reforming governor who had gained his office by exposing the corruption and bribery practiced by Boss Tweed and Tammany Hall in New York City.

The general election campaign became a referendum on two distinct concerns. First, the widespread corruption of the administration of the departing incumbent president, Ulysses S. Grant. Second, the struggle to re-establish state governments throughout the areas controlled by the defeated Confederacy. Tilden appealed to rural voters who were fed up with the corrupt mess in Washington as well as to white Southerners who sought to recapture control of their state governments from Republican carpetbaggers and newly free African-Americans.

The Republican strategy, as Chief Justice William Rehnquist recounted in his 2004 book about the 1876 presidential election, was “to impress on the electorate that while every Democrat had not been a rebel, every rebel had been a Democrat.” Hayes was the champion of those who feared the election would undo everything the Civil War had achieved for African-Americans. Just 11 years past, the war’s bloody cost was still vividly remembered by the many Union soldiers now voting in the North.

We remember 1876 though, not because of the presidential campaign, but because of the inconclusive vote. Two weeks before Election Day, Hayes confided in his diary that “danger is imminent: A contested result. And we have no such means for its decision as ought to be provided by law.” Hayes could not have imagined how prophetic his words would become. 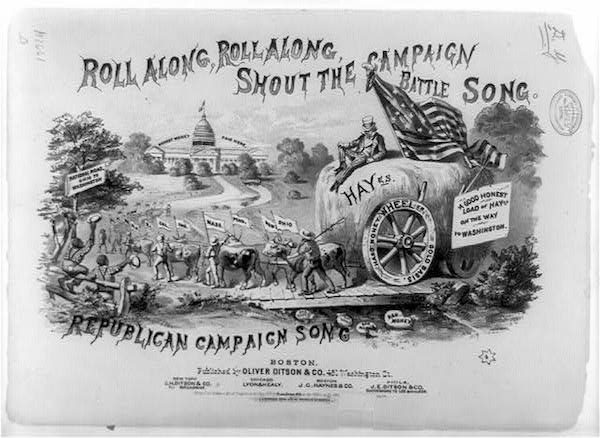 An illustrated sheet music cover for a song composed in honor of Republican presidential candidate Rutherford B. Hayes, 1876.

Tilden emerged as the undisputed victor in 17 states containing 184 electoral votes, and Hayes clearly prevailed in 15 states with a total of 166 electoral votes. Tilden won all of the former Confederate states that had emerged from reconstruction; the border states of Delaware, Kentucky, and Missouri a handful of Northeastern states; and the three scattered states of Indiana, Missouri, and West Virginia. Hayes won a belt of states ranging from the West through the Plains, as well as the Midwest, Pennsylvania, and five New England states.

The winner was unclear in the three Southern states that were still under the control of Republican governments backed by the federal army: Florida, Louisiana, and South Carolina. Each of those states had struggled to make the transition from the Civil War to the new era prohibiting slavery and guaranteeing equal rights, which was promised by the constitutional amendments. Federal troops were still there to enforce those legal guarantees and to defend the many African-Americans who had been elected to office.

Additionally, while Hayes won Oregon by about 1,000 votes—one of his electors also served as a deputy postmaster, thus violating the constitutional prohibition upon electors holding federal office. Hayes would prevail only if he won all 20 of the uncertain electoral votes: Louisiana’s eight electoral votes, South Carolina’s seven, Florida’s four, and the disputed elector in Oregon. Conversely, Tilden would be elected if he captured just one of those 20 electoral votes.

Tilden’s supporters insisted that Democratic votes had been wrongfully ignored in the three Southern states, while the Republican supporters of Hayes complained that African-Americans in those states had been prevented from voting through intimidation. The dispute was not resolved by any of the extant constitutional provisions or federal statutes, but rather by the 8-7 vote of a special commission that Congress established solely for the purpose of resolving the election.

Hayes thus defeated Tilden by one electoral vote–185-184–after it was determined that all four contested states had cast their votes for Hayes. Congress accepted that result just before Hayes was inaugurated on March 4, 1877.

There has never been anything like it before or since. Even in 2000, when the Florida Supreme Court and then the U.S. Supreme Court took turns overseeing the recounting of votes in Florida, the dispute was limited to one state and there were no allegations of violence or widespread fraud on Election Day. Since 1876, we have expanded the right to vote to women and to 18-year-olds, and have worked to secure the voting rights of African-Americans that were supposed to have been guaranteed by the constitutional amendments adopted after the Civil War. But we have yet to adopt a widely accepted standard procedure in this country for how to count votes—and recount votes when there are disputes. And this lack of a standard is what precipitated the events in 1876 and again in 2000. The special commission that Congress created in 1876 was a one-off, and nothing has replaced it. Each state has its own rules for counting the votes cast by the public on Election Day, and Congress remains free to decide how it wants to count contested electoral votes.

is a Professor of Law at the University of Notre Dame, specializing in election law and government issues.