This might be an appropriate way to characterize via Facebook the legacy of the 1965 Immigration Act, one of the biggest changes to the flow of people into America.

At a Smithsonian/Zócalo “What It Means to Be American” event on the occasion of the 50th anniversary of the the Hart-Celler Act of 1965, a panel of scholars tried to explain how a piece of legislation could create so many contradictory and unexpected after-effects, and what kind of world created the policy.

The contradictions, in fact, start at its very signing. In front of a full house at the University of California Washington Center, the moderator of the panel, Gregory Rodriguez, Zócalo’s publisher and founder, read these words from a speech that President Lyndon B. Johnson gave at the signing ceremony:

This bill that we will sign today is not a revolutionary bill. It does not affect the lives of millions. It will not reshape the structure of our daily lives, or really add importantly to either our wealth or our power.

Yet it is still one of the most important acts of this Congress and of this administration.

For it does repair a very deep and painful flaw in the fabric of American justice. It corrects a cruel and enduring wrong in the conduct of the American Nation

Johnson certainly saw the pain in giving some countries bigger immigration quotas than other countries, a policy put in place in the 1920s, explained Erika Lee, director of the University of Minnesota Immigration History Research Center. There could be as many as 51,000 immigrants from Germany a year, for instance compared to only around 3,400 allowed from Italy.

It was a “deeply unfair, unequal system that privileged immigrants from northern and western Europe, disadvantaged immigration from southern and eastern Europe, but also barred almost every Asian immigrant group,” Lee explained.

The new law got rid of lopsided national quotas and considered immigrants based on their skills and close relationships to people who were already in the U.S.

It was a way for politicians to speak to one particular demographic that was growing in political power, explained Mae Ngai, a history professor at Columbia University. In the 1950s and 60s, “ethnic” whites—the children and grandchildren of Italians, Eastern European Jews, Hungarians, and others who had come to America at the turn of the 20th century before preferential national quotas were put in place—were becoming a voting bloc and playing active roles in unions like the AFL-CIO. They became a big force behind the election of a super-majority of democrats in both houses of Congress.

“So what Johnson was in a way referring to was the symbolism of telling these groups, ‘You’re as good as the pilgrims,’” Ngai said.

But one of the aspects Johnson badly underestimated was the effect on immigration from Asia. Backers of the legislation promised people in Congress, in fact, that Asians were not going to come in great numbers.

“Johnson referred to the fairness of the new system and stressed the ability of people to enter on merit, but in truth, the main provision for entering under the 1965 act was through family ties,” explained panelist Richard Alba, a sociologist from the City of New York University Graduate Center. “So, there was—as legislators saw it—a built-in selection mechanism that would tend to preserve the kind of ethnic and racial composition of the population as it then existed, and to limit the numbers of people, particularly Asians, who were not well-represented then in the American population, because they would lack the family ties to come.”

That turned out to be completely false since the flow of southern and eastern Europeans expected to come to America failed to materialize. And instead, the number of immigrants from Asian countries multiplied.

The other major political miscalculation was to set caps, for the first time, on immigration into the U.S. from other countries in the western hemisphere.

At the time the act was passed, there was a robust circulation of immigrants between Mexico and the U.S. Between 1942 and 1964, some 4.6 million workers came to the U.S. as “guest workers” under the auspices of the Bracero program. The 1965 Immigration Act suddenly limited immigration from all countries in the western hemisphere, and a 1976 revision to the act further specified that each country (in any hemisphere) would only be allotted 20,000 immigrants.

These changes to immigration law “created an artificial separation between Mexican-Americans and Mexican immigrants,” especially in the 1970s, said panelist Matt Garcia, director of the School of Historical, Philosophical, and Religious Studies at Arizona State University.

“It’s very hard to see [the 1965 Immigration Act] as positive from a Latino point of view,” he said. For one thing, “The cap created the ‘illegal immigration’ label,” Garcia said, since the high numbers of Mexican and Central American immigrants going to America couldn’t stop overnight even if the law changed.

It also “imperiled attempts to unionize farmworkers,” Garcia said. Because the main sponsor of Cesar Chavez’s efforts with farmworkers (the AFL-CIO) didn’t consider non-citizens worth organizing, Chavez left out a large population of workers in need of protection.

It also led to laws like Proposition 187 in California, which limited undocumented immigrants’ access to public schools and publicly funded healthcare, among other services, Garcia said. (A federal district court later found the proposition unconstitutional.)

“It’s been very, very wrenching for Latino families,” Garcia said. “They’re the ones who have been the most vocal in saying we need immigration reform.”

Though Johnson acted in a high-minded way to reverse national quotas, he didn’t necessarily think through how treating every country the same might play out in practice, Ngai said.

“The whole way that Hart-Celler has been explained to the American public is that, it’s a civil rights act, we treat every country the same,” she said. “So people don’t question, ‘Why do we treat Mexico the same as New Zealand?’ … There could be a way to treat countries in a different way that was based on some rational logic: Being contiguous to the United States means that you should get more people. If you have long relationship with the United States, maybe you shouldn’t be subject to a cap.”

So how has the U.S. responded to this change in the make-up of our immigrants, and how have we prepared for more change? Rodriguez asked.

Alba said it was hard to answer how well the country has responded to the change, but it’s clear that “a tremendous transformation obviously has taken place.” In the 1970s, he said, America was largely a white-and-black society and the number of foreign-born people was under 5 percent.

Today, whites are a much smaller population, Latinos have become the largest minority, and those with Asian backgrounds are growing most rapidly, Alba said. The foreign-born population of the U.S. is now around 14 percent.

Alba also pointed out, “One of the blessings for the United States—aside from the diversity—that the Hart Celler Act initiated has been the relative youthfulness of our population compared to that of many other economically equivalent societies. We’re not Japan. We’re not Germany.”

In a wide-ranging question-and-answer session, participants asked about the effect of the immigration reform on African-Americans and those of African descent, what the panelists thought about how some forms of immigration included a path to citizenship and others did not, and the impact of the act on Latinos who do not come from Mexico. It became clear that the law has had very uneven effects on different groups in America, that Congress didn’t predict many of these effects, and that the world looks very different now from the one that created the act.

It’s good to keep in mind, as many of today’s politicians bring up immigration to stir up domestic audiences that back in the mid-’60s, immigration was very much an issue of foreign policy.

“Both [Presidents] Kennedy and Johnson were very conscious of … the tarnishing of America’s reputation as the leader of the free world,” Ngai said. “You had Jim Crow and you had national origins quotas. So a lot of the willingness of the administration to enact civil rights reform is [from wanting] to look better around the world.” 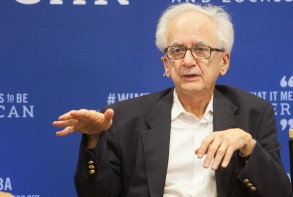 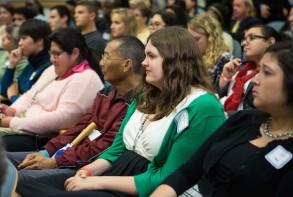 Great audience at the University of California, Washington Center 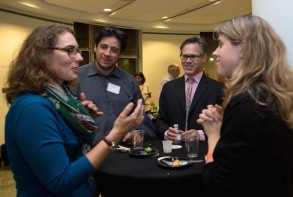 Panelist Matt Garcia, second to right, with guests at reception 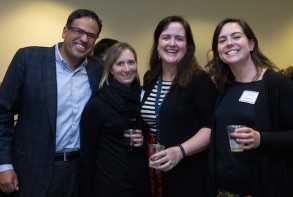 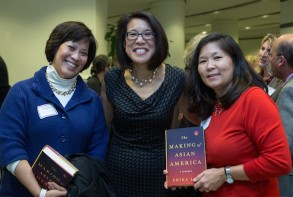 Erika Lee, center, with guests showing off copies of The Making of Asian America: A History