From the light bulb to the iPhone, America has a long history of revolutionary inventions. So what does this ingenuity spring from? What are the conditions that allow for our innovative spirit?

At a Smithsonian/Zócalo “What It Means to Be American” event, held at the National Museum of American History in Washington, Zócalo Public Square publisher Gregory Rodriguez moderated a lively, big-picture discussion about the nature of creativity and the cultural forces that influence it. The evening featured four panelists, all recipients of this year’s Smithsonian magazine Ingenuity Awards, from a wide variety of disciplines: Alan Stern, principal investigator of NASA’s New Horizons mission to Pluto; Zoe Crosher, co-curator of The Manifest Destiny Billboard Project; Harvard Alzheimer’s researcher Doo Yeon Kim; and Françoise Mouly, art editor at The New Yorker. In front of an enthusiastic crowd, they debated the right balance of doggedness and collaboration, and hunger and support.

Rodriguez kicked the conversation off by questioning the prevailing vision of the American loner—the individual, as opposed to the group, who tinkers alone in his garage until he or she makes a groundbreaking discovery. Is this the correct way to frame innovation? Is it just as important—or even more so—to have a society that wants innovation to take place?

Kim suggested that while society cannot force genius or ingenuity, a society supportive of innovation is still essential. Consider how easy it is for a society to stifle it, he pointed out. “I was raised in South Korea,” he said, and while there are many things about the country he loves, “I’ve seen a lot of cases where talented people just aren’t in the right place. There are genius people over there, but often they don’t find the right outlet for this genius.” They don’t have the impulse to push their fields forward as a result.

Mouly picked up on this idea by talking about her similar experience coming to the States from Paris. “I spent a few months in New York when I was 19 or 20 and still studying architecture in France,” she said, “and it was absolutely clear to me that there was an openness to new ideas and new ways of doing things.”

When she returned to Paris, she explained, she ran into trouble when she tried to land a job that required three more years of experience than she had. “I said I could do it: I have the skills, I’m interested. And the woman who was doing the hiring looked at me like, ‘Get out of my office,’” Mouly said. “I realized it was my New York spirit.”

While in France she often heard, “That’s not how we do things,” in New York, she never found barriers separating her from the experts. When she wanted to try her hand at plumbing, for instance, she found plumbers and learned from them. “To be curious was enough of a qualification,” she said.

The idea of a lack of hierarchy in America was a theme that ran throughout the conversation. Kim noted that he didn’t see the rigid divisions he’d seen in other places like Korea where “associate professors aren’t allowed” to talk to senior professors. Crosher added nuance to the idea by noting that it’s not that there are no hierarchies here—the politics of the art world, for instance, are “very bizarre, and exist in all sorts of irrational ways that all have to do with the market.” It’s that even in hierarchical fields, often there are ways to work around the established order, she said. The project she was recognized for, which commissioned artists to design works for billboards across the country, was sponsored by LAND (Los Angeles Nomadic Division), an arts nonprofit organization that she describes as a “really radical outlet.”

“My idea was insane. No one in a normal museum system would have been able to take this project on,” she said. “So I was able to find someone who could go around it. I constantly find myself bumping up against hierarchies, and I’m constantly finding ways to ways to get around them—or above them, or under them.”

Given the panelists’ rebellious streak, Rodriguez teased, “does ingenuity just mean a bunch of anarchists? Do you have to be a pain in the ass to be inventive?”

Yet Stern, who has developed numerous scientific instruments for planetary and near-space research missions, also noted that “it sells innovation short to characterize it only in terms of the anarchy aspect. Sometimes it’s just a smart person solving a problem in an inventive way. It’s important that we recognize innovation comes in many forms.”

Collaboration, Stern said, can both help and hinder individual innovation; it’s just “an issue of degree.” On the one hand, sometimes the open-office trend goes too far: People can get distracted when companies try to force collaboration and end up getting in each other’s way, he said. But on the other hand, when he worked in the University of Colorado’s Center for Space and Geosciences Policy, he had different research groups sit together, so that people from different specialties would bump into each other. The result was a cross-pollination of ideas, because people naturally shared thoughts as they passed by.

“Encouraging innovation has been very much to our advantage for the past 220-plus years,” he said. “We’ve been an inventive nation from the get-go, with democracy to the technological powerhouse that this nation has become. It’s cultural, and it feeds on itself. It takes many forms and pathways.”

In a lively question-and-answer session, many audience members pressed the panelists to consider the more challenging sides of innovation. Is war good for creativity? And who’s left out of America’s innovative ethos—who can’t afford to be creative?

On the topic of wars, Stern acknowledged that, for better or worse, they have in fact inspired a lot of technological invention. “It’s unfortunate, but empirically wars spur invention,” he said.

The panelists agreed that not all classes, races, and genders have equal opportunities to innovate—and more education and awareness are important to overcome these obstacles.

Still, said Mouly, “I do believe that here there are opportunities for somebody who is hardworking and passionate, regardless of class and academic achievement. I’m not saying there aren’t problems, but you can make your own way.” 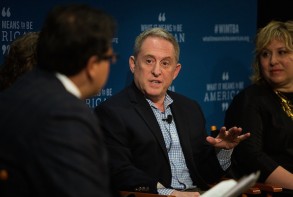 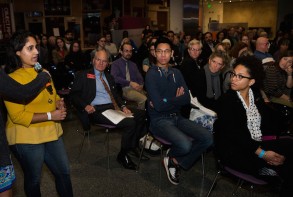 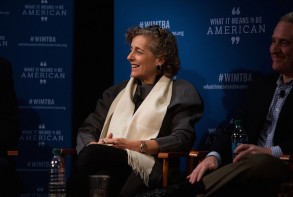 Francoise Mouly, art editor at The New Yorker and panelist 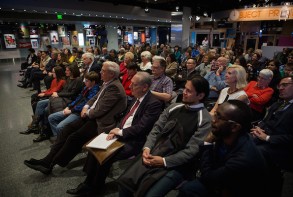 Great crowd at the National Museum of American History 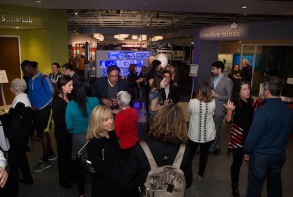