World War I was one of the most destructive events in human history, killing around 16 million soldiers and civilians worldwide, including 116,000 Americans. It did more than just destroy lives. It destroyed confidence in progress, prosperity, and the rationality of civilized society, perhaps the most treasured characteristic of the 19th century.

The Great War also arguably destroyed much of the next generation: those who would have provided leadership to Europe in the dark days of the 1920s and 30s, when once again the continent began sliding towards annihilation.

World War I also happens to be the most spectacularly memorialized war in history. In Britain alone, there are more than 50,000 war memorials. What many may not know is that three of the greatest World War I memorials in the world are located in the Midwestern United States: in St Louis, Kansas City, and Indianapolis.

The Soldiers’ Memorial Museum, in the heart of downtown St. Louis, is a huge and deeply impressive building dedicated in 1936 by President Franklin D. Roosevelt as a memorial to the 1,075 men from St. Louis who died in World War I. The memorial is spectacular—all mosaics and marble, with terrazzo floors and four huge Bedford stone sculptures entitled Loyalty, Vision, Courage, and Sacrifice.

The memorial’s centerpiece is a vast black granite cenotaph—Greek for “empty tomb” —covered with names of the fallen, in neat row upon neat row. It is a classical temple in some ways, full of symbolic carved figures, symbols of victory, with a huge empty tomb at its core.

The second impressive World War I site in the Midwest is the Liberty Memorial in Kansas City, which broke ground in 1921 and was dedicated on November 11 (Armistice Day), 1926. It was the result of a remarkable design competition, and an even-more remarkable fundraising campaign. In less than a year, $2.5 million had been raised through donations from over 83,000 separate contributors. 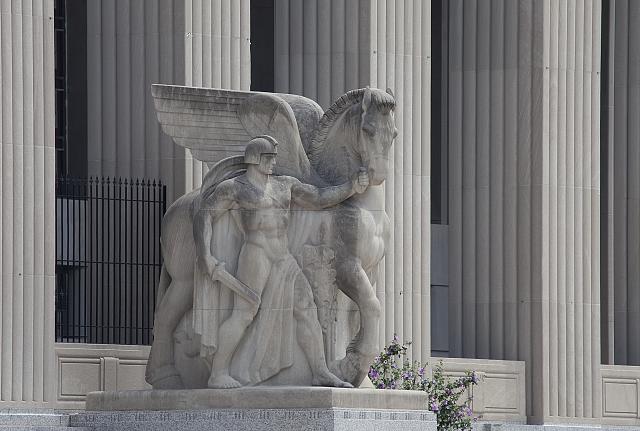 The winner of the international design contest for the structure was Harold Van Buren Magonigle, a distinguished American architect. It is centered on a 268-foot-tall tower that dominated – and still dominates – the skyline of this part of the city. At the top of Van Buren’s structure are four symbolic “guardians,” each standing at 40 feet high, entitled Honor, Courage, Patriotism, and Sacrifice.

A “flame of inspiration” burns from the tower each evening. Below this is the “Great Frieze,” which depicts the optimistic story of humanity’s march from an era of war to an era of peace. The sculpture, created by Great War veteran Edmond Amateis, runs about 488 feet long and is 48 feet tall.

The names of the 441 Kansas City war dead are listed inside of one of the two temple-like buildings that sit on either side of the tower. Outside, we see Kansas City’s version of the cenotaph—two empty cinerary urns, which would in antiquity have contained the ashes of the dead, flank the entrance of both buildings. And there are also two huge sphinxes: “Memory,” which faces the east toward the battlefields of Europe, shields its eyes from the atrocities of war. “Future” faces the west, covering its eyes from a future that is unknown. The overall effect of this memorial is quite stunning, and it is wholly appropriate that is now home to the National World War I Museum. 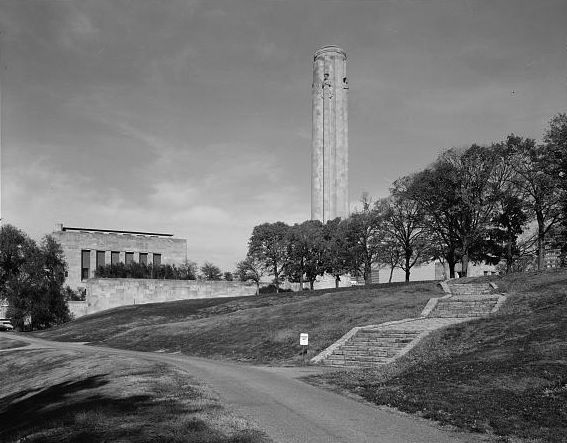 The third noteworthy U.S. World War I memorial is in Indianapolis. Five downtown blocks were razed to make space for War Memorial Plaza, which is the biggest war memorial project ever undertaken in the United States. It has three distinct elements—a cenotaph, an obelisk, and a war memorial shrine, which itself contains a shrine within a shrine. The cenotaph—which memorializes James Bethel Gresham of Evansville, the very first American casualty of the war—is surrounded by four columns, topped by eagles.

The 100-foot black granite obelisk was built in 1923, and the square was completed in 1930. Near its base are four-by-eight-foot panels to represent law, science, religion, and education—the sculptor said, “upon these four fundamentals are built the foundation of our nation, without any one of which it could not long survive.”

General John Pershing laid the cornerstone of the memorial shrine on July 4, 1927. One of the biggest war memorials in the world, it is so packed with symbolism and references to the history of memorialization that it almost defies analysis. One of the highlights is the sculpture on the outside steps entitled Pro Patria; it is 24 feet high, weighs seven tons, and was the largest cast bronze sculpture in the United States.

And finally, there is the “shrine room.” A huge American flag hangs over an empty tomb, blue lights shine from above, with light coming from an ornate chandelier known as “Star of Destiny.” The massive ceiling is supported by dramatic, blood-red marble columns, and the empty tomb, sometimes referred to as the “Altar of the Flag,” is guarded by four fire urns. In the words of American historian Jared Mayo, “Among American war memorials, there is no equivalent to the shrine room. The craftsmanship and grand opulence of its interior has not been surpassed.”

Like all war memorials, these three represent a paradox—they are elaborate celebrations of nationalism, and of military success, yet by having at their core a focus on the dead, they are also a powerful reminder of the cost of war. For all their splendor, the real purpose of these war memorials, and of our Memorial Day commemoration, is to draw our minds back to the men and women who fight the wars, and who pay the price for our freedoms.

Mayor Bernard Dickmann of St. Louis made these remarks upon the public opening of the St. Louis Soldiers’ Memorial in 1938: “We who live, because others have died, should make of this shrine a place of love and a monument of peace.”

These are fitting words for any Memorial Day.

James MacLeod, professor of history at the University of Evansville, has researched, written and lectured on war memorials. His book—Evansville in World War II: A City Transformed—will be published by The History Press later this year.