My great-grandmother, who was born in the 1880s, passed away when I was about 11 years old. Looking back, it is fairly obvious now that she was a hoarder on a colossal scale, but since this predated reality television, we tended just to say she was a packrat. As we cleaned out her house in rural Missouri, there was something special waiting: two boxes brimming with postcards. These were not of the “wish you were here” variety depicting washed-out hotel swimming pools and palm-tree-lined boulevards. These were older, more elaborate—variously embossed, gilded, tinseled, and extravagantly colored. They were greetings for birthdays and anniversaries, tokens of affection and romantic overture, and happy returns for every holiday on the calendar. Christmas, especially. 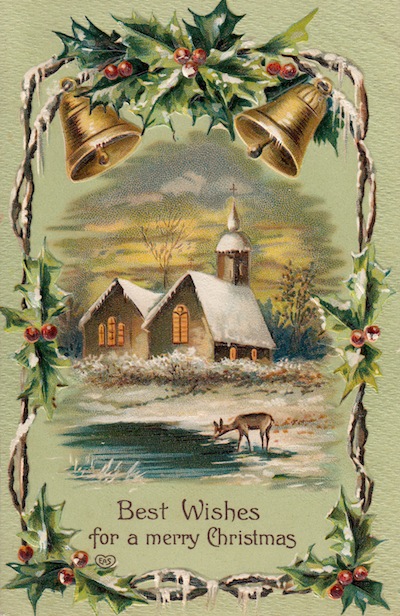 I didn’t realize it at the time, but my great-grandmother’s collection would give me a window into the desires—and anxieties—of a world I would only later come to understand and appreciate as I pursued my doctorate in American history. Until I embarked on that journey, the cards often sat in the back of closets or under piles of other accumulated stuff. Still, every so often, I’d take them out, dust them off, and wonder at them anew. Once my long nights of historical study began, I returned to them more and more often, until they finally set me on a path of becoming a scholar of American holidays and culture, including the phenomenon of holiday postcards.

It turns out there was a good reason my ancestor had piles and piles of these rectangular cardboard artifacts. For a few years in the early 20th century, postcards were a massive phenomenon. Billions of postcards flowed through the mail, and billions more were bought and put into albums and boxes. And amid that prodigious output, holiday postcards were one of the most popular types, with Christmas reigning supreme, just as it had in my inherited collection. 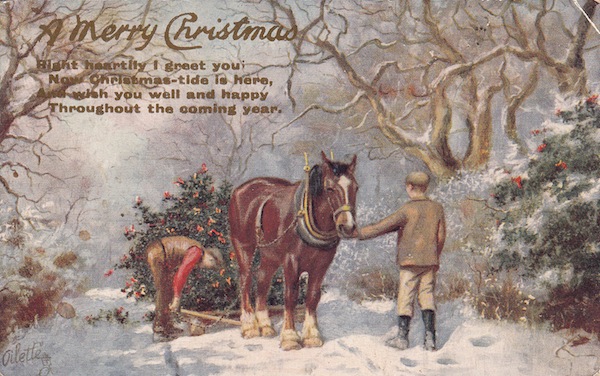 The practice of sending Christmas cards pre-dated the broader postcard craze by several decades, largely thanks to the efforts of Louis Prang. Prang was a savvy printing entrepreneur who kept adding products and lithographic techniques to his ever-expanding business, including the introduction of Christmas greeting cards (perhaps at his wife’s suggestion) in 1875. By the 1880s he was publishing more than 5 million holiday cards each year. And once postcards fell out of favor, greeting card companies like American Greetings and Hallmark rushed in to fill the void. But for a few short years between 1907 and 1910, Christmas postcards created a visual conversation between Americans that was unique because it was also very public. They were in many ways a forerunner of today’s impulse to post selfies and holiday pictures on social media. Unlike a greeting card or letter that hides its contents within an envelope, a postcard was always on display—from the rack in the drugstore where it might be purchased to its final destination. And those billions of snowy landscapes and bag-toting Santas churning through the mail system—the Rural Free Delivery system in particular—revealed much of what was on people’s minds at the height of the Progressive Era.

Take mistletoe, for example. Mistletoe had long been part of the Christmas tradition, with young men using sprigs of the plant to claim the right to demand or steal a kiss. Yet this was an era when women were asking serious questions about their rights and questioning the assumed passivity of their lives in everything from courtship and marriage to education and work. This is why so many postcards feature a woman who has taken control of mistletoe, deciding when and where it will be hung, and when she will choose to be under it and for whom. Sure, the rowdy, sprig-wielding young man still shows up in Christmas postcards, but now he must contend with the “New Woman” who uses mistletoe as part of her new right to take the initiative. 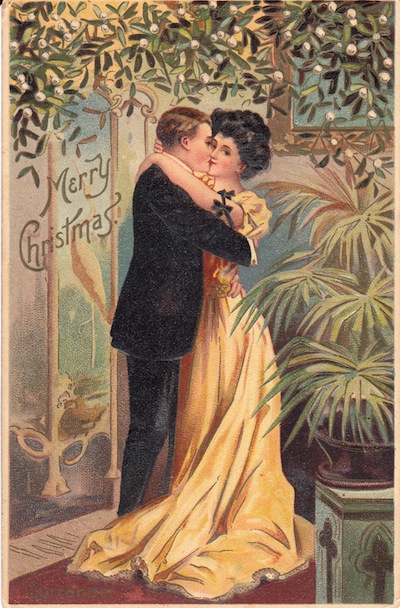 Rural landscapes are another good example. On the surface, nothing seems particularly unusual about a Christmas greeting that features a little snow-covered house in the countryside. That sort of mythologized ideal has been around since before the Civil War, when Currier and Ives capitalized on rural nostalgia with their inexpensive prints. Still, rural and small-town America was far from a contented place in the first decade of the 20th century. Farm children seemed to be fleeing to cities in droves, with 1910 marking the last census of a majority-rural American population.

One reason billions of Christmas postcards circulated with nary a cityscape to be seen is that rural Americans were circulating an idealized vision of themselves. When times seemed tough, all those picture-perfect fields, barns, fences, and country homes became a way to create an alternative narrative—one that was beautiful, healthy, and prosperous. One could argue this instinct shares significant DNA with the practice of staging family photographs for Christmas cards, or for today’s Facebook postings. There is something comforting and empowering about controlling the visual elements of a holiday greeting to your friends and family. Those visuals are not just representing you but a perfected version of you, and your world.

These were also the years when the United States saw the peak of European immigration, particularly immigrants from Southern and Eastern European nations like Russia, Lithuania, Italy, and Greece. Partly as a reaction to this inflow, and its surrounding anxieties, people were eager to emphasize their longstanding roots in the country, as if to say “we came here generations ago, not yesterday.” Manifestations of this urge to claim native roots pop up in the period’s genealogical societies, colonial revival movements, and yes, holidays. An “Old Fashioned Christmas” is a phrase that appears with increasing regularity through the first two decades of the 20th century. It is also a repeated theme in Christmas postcards with plenty of “ye olden time” imagery of colonial homesteads, spinning wheels, lanterns, rocking chairs, muskets, and horse-drawn coaches. 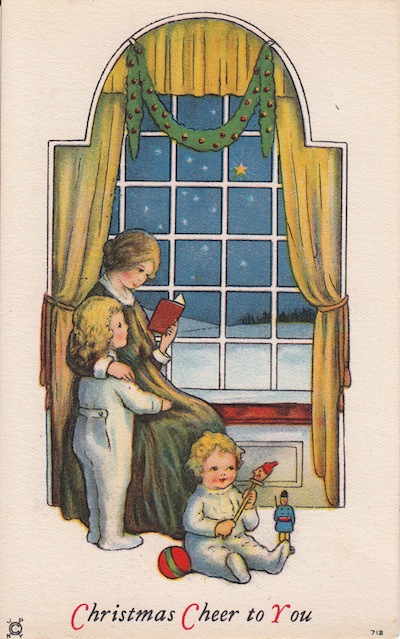 The postcard fad ended when the best postcards—which were printed in Germany using superior lithographic techniques—were priced out of the market by a newly passed tariff in 1909. By 1910, interest was waning as American firms failed to produce postcards of equal quality. World War I put the final nail in the coffin. Yet whereas Halloween or Thanksgiving greeting cards never took off the way their postcard predecessors had, Christmas cards have remained an American tradition, if now dressed up in an envelope. Always a mirror of the times, popular Christmas card styles included Art Deco in the 1920s and patriotic cards during World War II.

Looking back, however, there was something distinctive about the old postcards. They put it all out there—hopes, dreams, worries, excitement, wonder, fear, pride, and more—for store clerks and mailmen, nosy neighbors and family members to see and read.

Certainly I wonder how my great-grandmother’s network of cousins, friends, and her future husband (who sent her plenty of courting postcards, including a few mistletoes of his own) picked the cards they sent. What appealed to them and why? As a kid my answer would have been “because they look cool,” but as a cultural historian I now look deeper for what might like beneath the surface. Like so many others who gravitated to postcards with an almost forceful passion, she was a young rural girl from a long line of rural Americans who saw the world changing quickly. Postcards were a way of dealing with those changes, some welcome I’m sure, and many not. Still, I do agree with my younger self … they were and remain pretty darn cool.

is the manager of museum advisory committees at the Smithsonian’s National Museum of American History. His first book, American Holiday Postcards 1905-1915: Imagery and Context, was published by McFarland Press in 2013.

Photos courtesy of Daniel Gifford, from his great-grandmother’s collection.