It’s the only photograph we have of them all together.

My mother beams with the smile of an 18-year-old married only minutes before to the man who would be her husband for 49 years. My father is 21 and elegant in a gray double-breasted suit and matching fedora. To their right stands my mother’s mother, a widow who raised two children alone in the Great Depression. To their left stand my father’s parents, a pair of short and stout immigrants from the Ukraine, for whom smiling seems to have been an unnatural act.

September 7, 1941—newlyweds and their parents in a Los Angeles synagogue on a Sunday, none of them knowing the ways in which the winds of war would upend their lives.

For my young parents those winds would arrive 13 Sundays later. To celebrate their three-month anniversary my mother and father and their friends took the streetcar to Santa Monica. As my mother told it, the first thing they noticed was people on the street screaming. It came, she said, from all directions at once. Then people began racing toward the heavy cars parked at the curb, with their doors swung open and their radios turned to full volume. This was how my parents and thousands of others by the beach that day heard the news that a U.S. Naval fleet harbored 2,500 miles west had been bombed by the Japanese.

Whatever plans my parents and their friends had for their 20s evaporated in an instant, replaced by the steady march of the young men around them into uniform and to war. My father enlisted in the U.S. Navy. Some of their friends did not come back, including my father’s best man at that wedding, killed in 1944 at the Battle of the Bulge. My parents later gave his name to my older brother, their first-born son.

As for my paternal grandparents, the war’s deepest horror had already occurred, two days before the wedding photo. It was an event still beyond their knowledge as they posed arm in arm with those awkward smiles.

In June 1941 Adolph Hitler had broken his non-aggression pact with the Soviet Union and launched one of the largest invading forces in human history. The German path to Moscow went first through Ukraine, and Hitler’s armies had orders directing them what to do with the Jewish communities they met on the way. On September 5, 1941, Nazi forces arrived in the small Ukrainian shetl of Pavoloch, the village where my father’s parents had spent their childhoods before departing as a young couple for Ellis Island, three decades before. 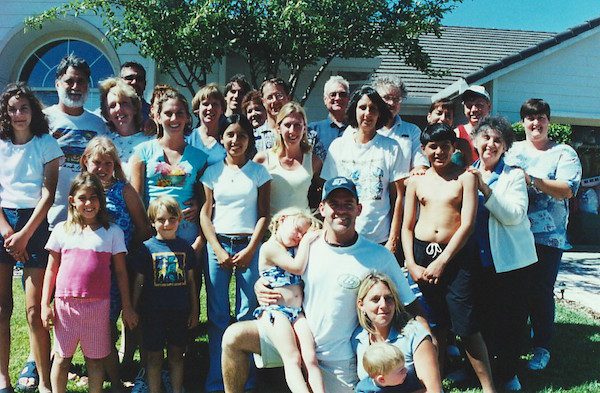 The Nazi troops rounded up the village’s entire Jewish population, just over 1,500 men, women, and children. They marched them past the synagogue where my grandparents were married and to the Jewish cemetery at the village’s far edge. There, the Jews of Pavoloch were forced to spend their last moments digging a mass grave. When the long trench was complete the Nazi soldiers ordered them to kneel side-by-side before it and methodically shot each soul. Afterwards they kicked the bodies into the freshly dug ground and threw just enough dirt on top so that the corpses were not immediately visible.

As they stood in the photo alongside my newlywed parents, my grandparents had not the slightest notion that every relative and every friend who had remained behind now lay in a shallow trench. I don’t know when or how they found out, but eventually they did.

Over the course of the last year many people have wondered, whether aloud or just to ourselves, if today’s world isn’t coming apart somehow at the seams. Terrorist attacks come unexpectedly and claim lives by the dozens. Inhumane acts seem to be on the rise. Political systems appear to be careening off the rails. In moments like these, history offers us perspective.

For my parents and their parents, and millions of others living in 1941, the world truly was falling apart. More than 60 million people would die as a consequence of the War. An entire race was targeted for genocide. Advanced and respected cultures went mad with fascism. Armies of unprecedented size took aim at one another. A pair of nuclear bombs incinerated 100,000 people in seconds.

And yet, in that private moment in the eye of the war’s storm, my newlywed mother and father, in the witness of family and friends, planted the seed of our family. Both of my parents are gone now but they left in their happy wake four children, 11 grandchildren, five great grandchildren, and a new one set to arrive shortly after what would have been their 75th wedding anniversary. As my mother approached her death last year at 92, one of the things that could still make her giggle was talking about the huge family she and my father had started that day in 1941. “We were just kids, what did we know?” she would say.

Our moment in the arc of history holds deep challenges. We know that. But the challenges faced by humanity that late summer afternoon 75 years ago were deeper still. An old portrait in black and white serves as a reminder that what we do in this time matters most to those who will come after us.

is the executive director of The Democracy Center and lives in Cochabamba, Bolivia. He tweets at @jimshultz.

family, history, PERSONAL HISTORY, PHOTO, PHOTOGRAPHS, POST WORLD WAR II, what it means to be american, WHO WE WERE